It’s hard to imagine a single LEGO set that combines arcade nostalgia, football, and LEGO fans’ love of minifigures, but the #21337 LEGO Ideas Table Football manages to cover it all. Firstly, the 22 minifigures come in 4 different skin colors and with 44 different head options (female and male choices for every minifig). Having so many minifigs allows you to fill the playing field as well as the stands. There is a thoughtful bonus feature of the set; underneath the stands is a storage section where you can store all the extra heads and various accessories (like the flags). 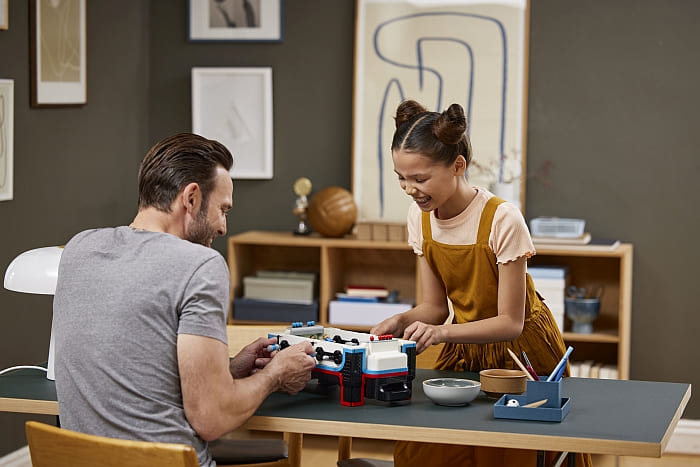 As far as the design of the set, it’s rather straightforward with no remarkable building techniques. One thing I found impressive is how solid everything is built. LEGO designers knew that the play-functionality of the set might lead to some rough handling, thus they built designed the set to be extra solid.

And speaking of play, this is a fully functional table football. The bars of the players have solid action for positioning and spinning. Each goal features a simple ball return mechanism to help you retrieve the ball and put it back into play. Above each goal are pieces to track the score. And the balls are designed to be heavier than other LEGO sports balls we’ve seen in the past. This means they have a true-to-life response as you play. 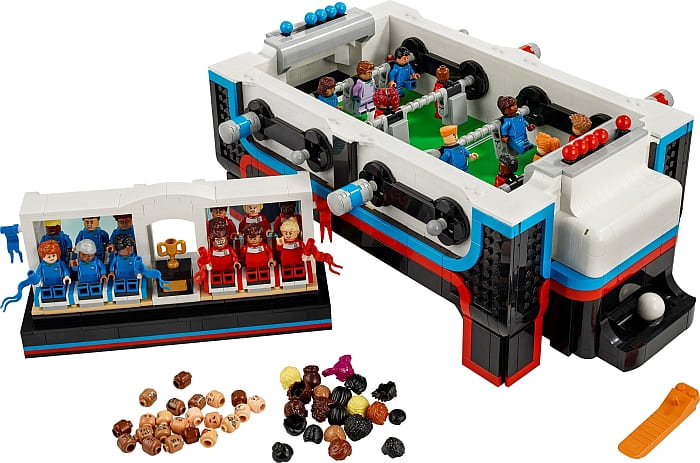 Overall, the design is much heavier in building style than we normally see from LEGO. There are thick solid walls and a very robust support structure under the field. And the majority of the model is covered in brackets. This means it is easier to decorate with elegant blue and red lines, but it also allows for some serious reinforcing vertically.

But is it worth spending $249.99 on a mini table football made out of LEGO bricks? Let’s look at some of the finer points of the set that may help you decide!

I think the first thing anyone is going to notice about this set is the sheer number of minifigures. As mentioned above, the set comes with 22 minifigures to fill the playing field and the stands, and 44 choices for heads in 4 different skin colors. Some of the heads are dual-sided for even more options.

There are also tons of hair options in different styles and colors. You might notice that all the hairstyles are up and do not hang down past the shoulders. This is due to lock the minifigs into the table via neck brackets. Long hair hanging down does not work with neck brackets, thus all the minifigs keep their hair up.

One feature I was not expecting is that the balls are weighted. This means they have a very satisfying sense of motion when struck. Additionally, the weight prevents them from being flipped up and out of the play area. 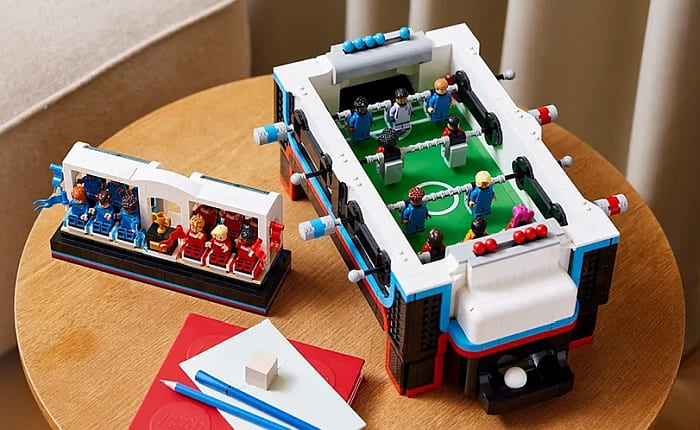 There are also a couple other design features that make the play area very practical. The sides of the walls surrounding the field are rather high. This keeps even minor bouncing of the ball from escaping the field. There are also built-in flags in each of the corners. This prevents the ball from rolling into a corner where no team can reach it. 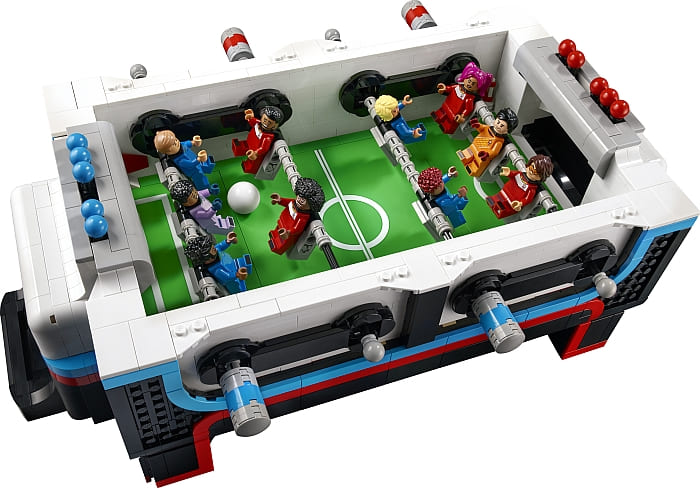 Those with a keen eye will note that the two bars of players each person controls have different movement constraints. The back row consists of three players providing maximum coverage to protect the goal. However, being more crowded in this row means there is less movement available from left to right. The middle bar on the other hand only has two players. These are allowed much more freedom to move from side to side in order to get into the right position for hitting the ball. 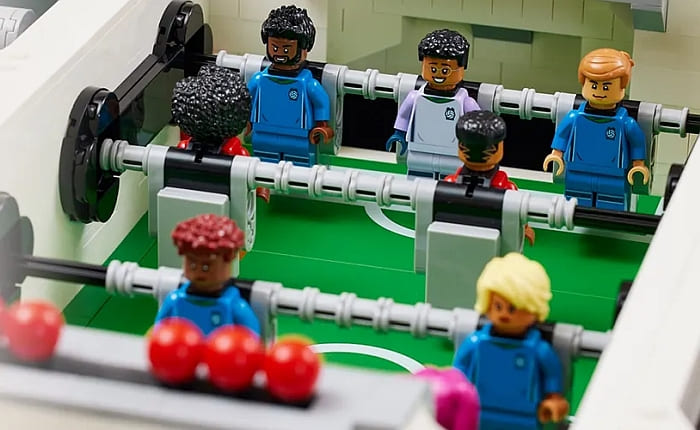 Another nifty play feature is located above each goal. Here you will find five ball-joints matching one of the two team’s colors. Each ball is connected to an axle. This means when a team scores a goal, a ball can be slid over to keep track of their point.

And finally, I really love the design of the two ball returns. They are simply slots located under each goal. However, the interior of each return is filled with slopes that gently guide the ball to the easiest position for players to reach in and grab.

Normally, with a LEGO set at this price point, I’d be gushing over various interesting building techniques. However, this set is rather straightforward in its design. I’d say that even novice builders shouldn’t have any issues assembling it. Though I do want to emphasize that this is probably one of the most solidly built sets I’ve ever put together. As we mentioned earlier, this is because the set is meant to be played with – even roughly and therefore needs a higher degree of durability than we normally see with sets at this price point. 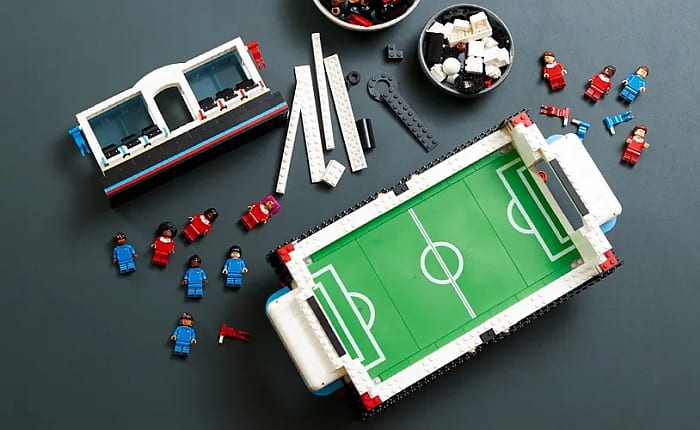 The stability is accomplished by utilizing brackets to secure sections in multiple directions. The legs are a good example of this. They are built upright in the traditional manner with studs up. Then two of the sides are tiled, locking the bricks in place. The legs are then added to the table and further reinforced by a series of slopes. By building this way, a part would literally have to break before anything would fall apart. Let’s just say, this is the first advanced LEGO model I would hand to a small child to carry. Well, maybe I would caution them not to grab the model by the poles, but other than that, it should be good to go.

First, everything you see with some kind of decoration is printed. This set does not have a single sticker involved. I absolutely love this feature, especially for the field. The large 6×16 tiles printed means the field won’t look lopsided like it could happen with applied stickers. Speaking of printed elements, there are a couple of surprise tiles that come with the set. Hidden under the center field are these little secrets that only you, the builder will know about. 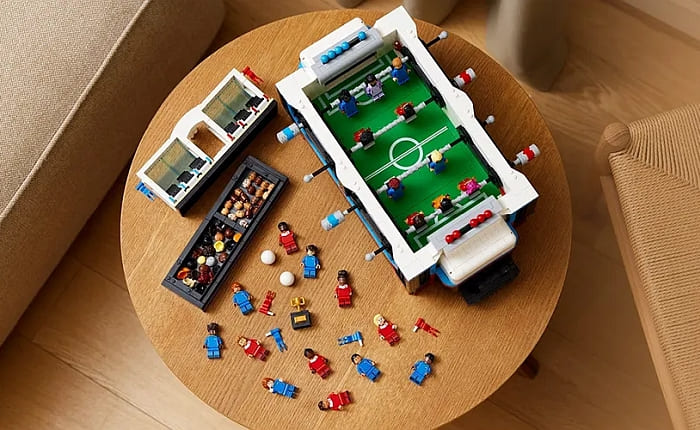 Beyond the printed elements, there was only one part that was completely new to me. On the sections of the table that circle around each control bar, there are tiles that sort of form a flower shape. These are actually 1×2 half-circle tiles. LEGO designers could have accomplished this look by using two quarter rounds, but since they expected heavy play, I imagine they wanted something with a bit more clutch-power. The result is these handy-looking parts, which could be extremely useful for detail work.

The name of the game for this set is; everyone plays! And I must admit it exceeds at it easily. The amount of variety in the minifigures alone not only means you’ll find good representation, but the minifigs are clearly a lot of fun to decorate the field with.

As for the table, you can get pretty rough with this thing and it will hold up like a champ. The only issue I can really imagine is people might get a little too excited and pull off the handles? But even still, if you put them on right, you have to really be trying to make that happen. Unlike other sets in the same price-range, it is solid through and through.

Given that so much effort went into making this set playable, you’d think it might not make an interesting display piece. However, the model does an excellent job of recreating its larger counterpart. This gives it an instant air of nostalgia that really makes this set a charming display piece as well.

If anyone would be disappointed, I would say it’s the expert builder looking for an advanced build challenge. That is not really what this set offers. Though I will say that it was novel seeing a LEGO model so heavy-handedly focusing on building a reinforced frame. Most of the time, you would see gaps or unsecured sections that feel more decorative, which is not at all the case here. Any section that seems weak during construction only seems that way because it hasn’t been fully locked in place. And it is this thick and sturdy building style that brings the price of this setup to the $249.99 price-point. In the video below, I talk a bit more about the set and some of its features.

Overall, I’d recommend this set for the football/soccer enthusiast as well as those who have a connection with foosball. Beyond that, this set is also a solid parts pack. There is a lot of repetition in the design, so you get a good number of the same parts in large quantities. Brackets are especially in abundance in this model. And if you want minifigure variety and you don’t want distinct intellectual property characters, there are very few sets that offer this many choices. Just keep in mind, these aren’t your basic yellow minifigures. All in all, I would say that the price is fair for a rather novel set. If you want to check it out, it’s available at the LEGO Ideas section of the Online LEGO Shop. 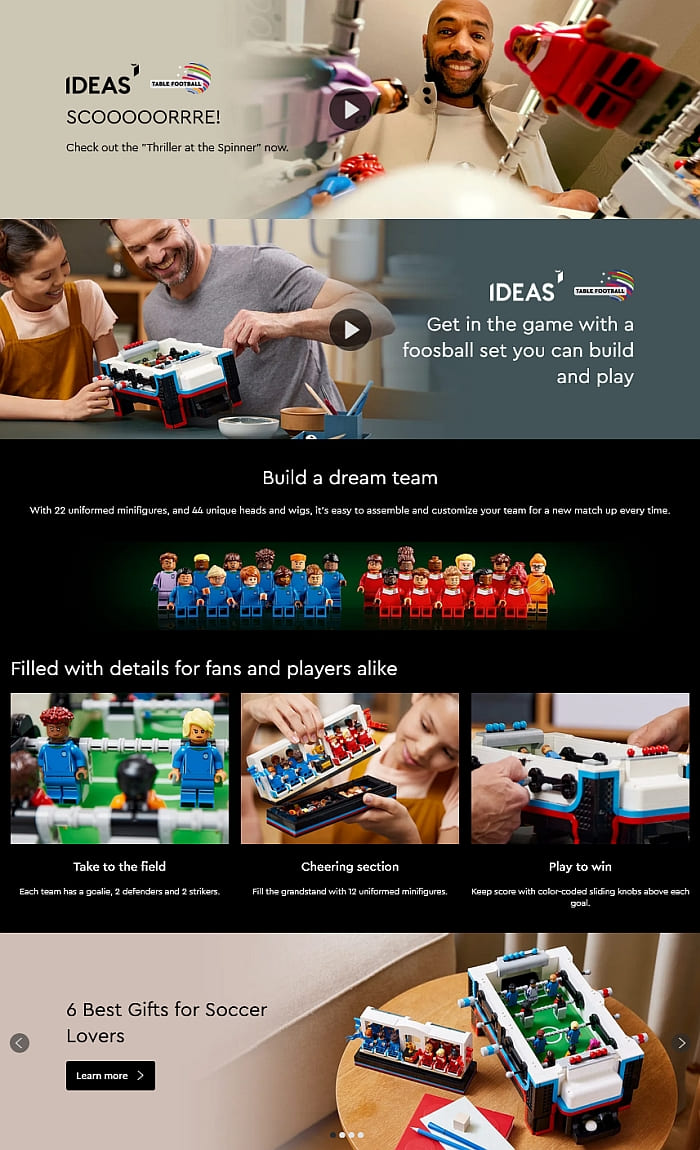 There is a new survey at the LEGO VIP Rewards Center, and you can earn 50 points by completing it by the end of today (November 20th). 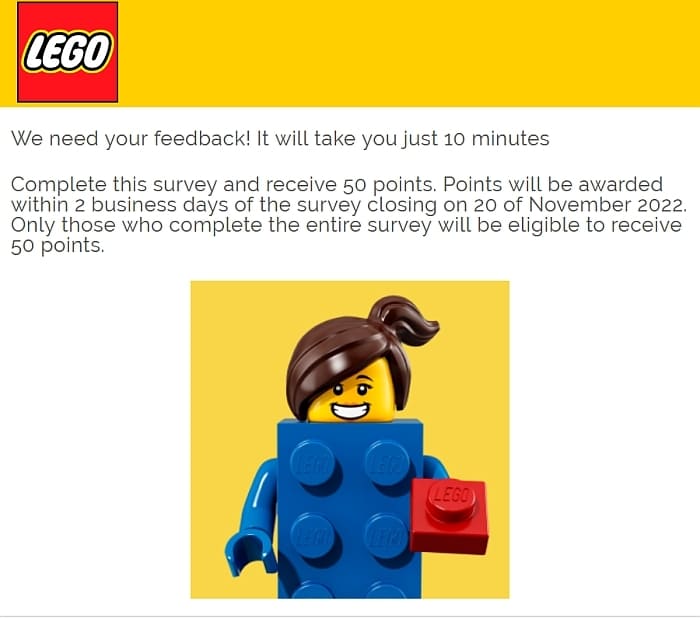 In the survey, you will see different possible names for a LEGO membership program that offers extended play advantages (and more) to users of any age. For example, it could offer play ideas, exclusive content, community participation, and LEGO rewards for members. 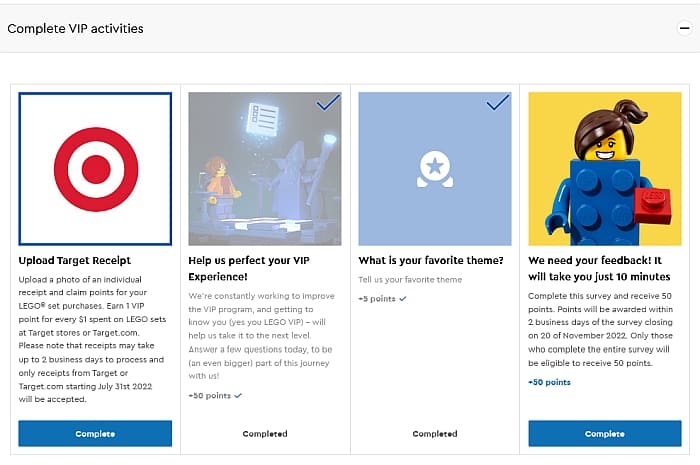 After a brief inquiry to identify what demographics you belong to, you are presented with ten possible names. Please note that people taking the survey won’t be presented with the same ten choices. Below is the list I was given when taking the survey, but you may be given different options. The survey will ask you in different ways which ones you prefer the most. The entire survey takes about 5-10 minutes to complete. 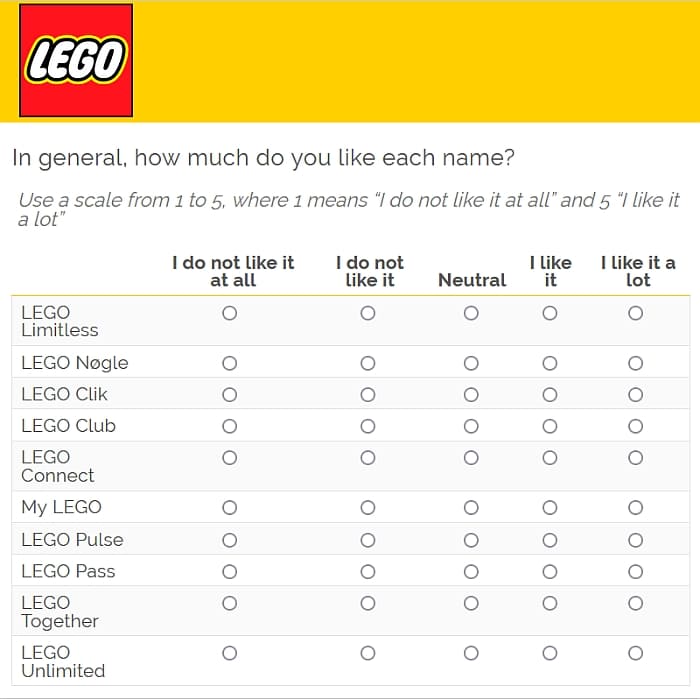 As mentioned above, the survey closes today, but if you have a few minutes, would like to earn an extra 50 VIP points, and at the same time help out the LEGO team, go to the LEGO VIP Rewards Center, scroll down to the Complete VIP Activities section, and click on the blue Complete button under We Need Your Feedback! 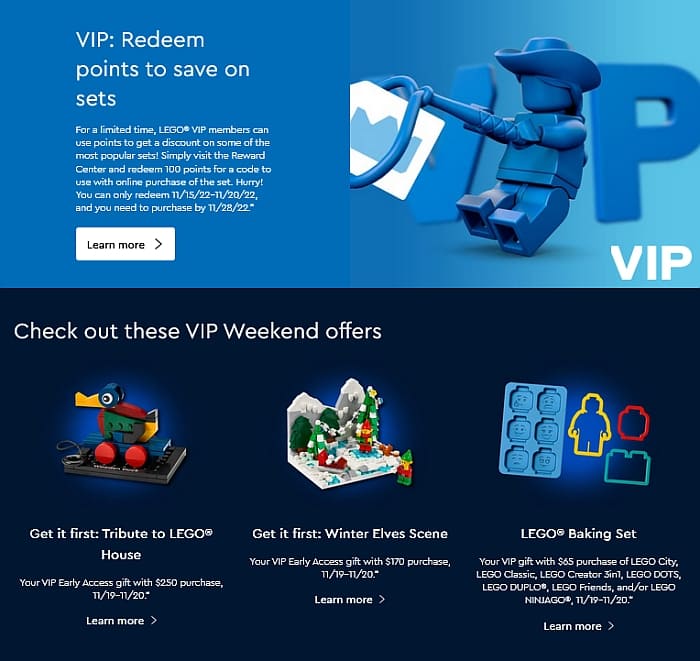 If you have any thoughts or questions on the survey or the LEGO VIP program, feel free to share in the comment section below!