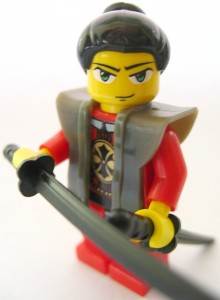 Remember though that Sidan’s own toy figures are somewhat different than LEGO minifigures. Therefore, depending of the design, some of these pieces will fit your LEGO minifigs perfectly, and some need a little modification.

Here I will show you one of my favorite pieces; the Sidan Toys Samurai Vest. (Available from A Minifig.Cat’s Store in several LEGO-compatible colors.)

I really like this piece because of how well it fits LEGO minifigs. The shoulder area is particularly nice! Although it does restrict arm-movement slightly; your minifig won’t be able to lift his arms above his head and surrender to the enemy. But samurai won’t do that anyway. 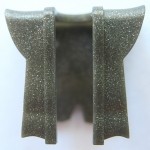 The front of the vest is open, allowing the design of the torso to peak through, giving a nice 3-dimensional layered-clothing look.

Remember that although this piece was originally designed as a samurai vest, there is really no reason why you would restrict it to be worn only by samurai. Especially with all the color choices! For example; I could easily see the dark-green one being worn by elves, the black one used by wizards, the blue and red ones by royalty, and the dark-brown by fantasy warriors. 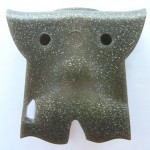 The back of the vest is also quite special; it has two small holes to attach the Sidan Toys bow & arrow holder. It also has a third, oddly shaped hole towards the bottom – I have no idea what’s this for. If you know let me know in the Comment section below.

One slight issue is that the vest is somewhat longer than the torso, therefore the LEGO minifig cannot fully sit down while wearing the vest. The length of the vest can be trimmed down, however I personally wouldn’t do this, as I really like the vest as it is. Besides, my Samurai spend their time either protecting people or practicing their art – they don’t have time to sit around. 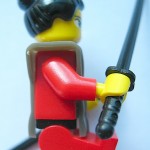 A bit bigger problem is that because of the slightly extended length, the LEGO minifig cannot fit snuggly into a horse-saddle while wearing the vest. However this can be easily remedied by elevating the minifig by a small 1×2 plate inside the saddle.

The area I do always modify is around the neck. Because Sidan Toys’ figures have different anatomy, the hole for the neck-area is smaller. If you place the vest on a LEGO minifig as it is, the head won’t fit inside the hole, and your minifig will end up having a goose-neck! 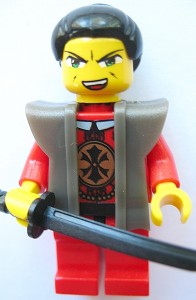 This can be fixed by enlarging the neck-hole on the vest. This can be done with various simple tools, depending on what you have access to. Personally, I just use my trusty file to rotate inside the neck-hole and shave away the excess plastic. 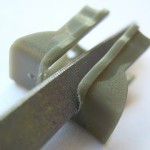 The process only takes a couple of minutes to complete. And there you have it; a handsome LEGO samurai! 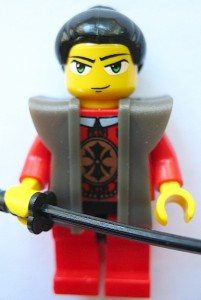 Previous post: Old LEGO in odd colors – where from?