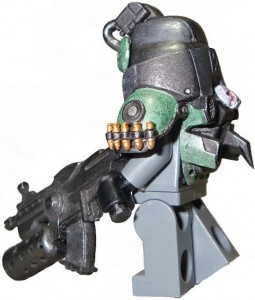 In real life PEDRO is a machine operating engineer for a construction company in New York – which translates to driving those awesome big CAT diggers.

In LEGO-life he is the authorized reseller for Amazing Armory, and runs a Bricklink store; United Armory.

PEDRO’s claim to fame is his amazing artistry and attention to detail in customizing LEGO minifigures. He is one of those guys who is not afraid to cut, drill, saw, melt, glue, paint or whatever is necessary to get his LEGO minifigs just right. 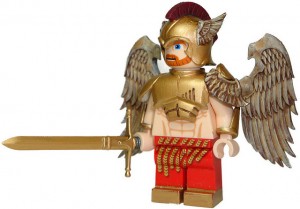 PEDRO often incorporates LEGO-compatible accessories from customizers like Hazel (Amazing Armory), BrickForge and BrickArms, and even action-figure lines. And yep, he also puts those pieces under his tools to customize them even further to meet his needs. PEDRO’s main focus is recreating sci-fi, video game or fantasy characters in LEGO.

(Notice on the above LEGO minifigs how PEDRO uses the same armor and helmet pieces that I have used for my Space Marines, but with a different color-sceme.)

I particularly appreciate PEDRO’s painting skills! The realism he achieves with paint on such small pieces is amazing. He uses many advanced painting techniques used by model-painters and miniature wargaming artists. 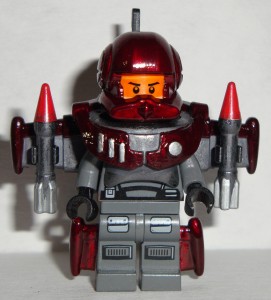 Do you recognize the armor from the LEGO Buzz Lightyear minifigure? A little painting-cutting-gluing can make such a difference!

PEDRO gets his paints and supplies from Hobby Wave, an online hobby store. If you are getting the customizing-bug you may want to check them out! 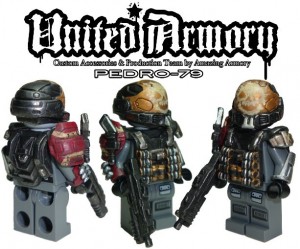