Nannan became involved with the online LEGO community in late 2004. He has been a builder for as long as he can remember.

Nannan builds in a variety of themes that often overlap with the science fiction universe, other times they are purely made up ones. You can see his creations on Brickshelf, MOCpages, and Flickr.

In addition, Nannan is a key contributor to The Brother’s Brick, one of the most popular LEGO fan-sites, featuring the best creations from LEGO fans.

Nannan is also one of the enhusiastic LEGO-fans behind Creations for Charity, a fundraiser where LEGO fans use their building creativity to help charity organizations. 100% of the funds raised goes towards various charity events, like buying LEGO sets for underprivileged children for Christmas.

Nannan funds his LEGO hobby by running a store on Bricklink: The Whimsical World. He often has the cheapest prices on LEGO Star Wars figs and other LEGO minifigs!

Nannan was recently featured in an article in The Dallas Morning News. Also, they have shot a video of Nannan talking about his LEGO creations in his own LEGO room. Who would not want to have a room like that? 😉

In real life Nannan graduated from college at Washington University in St. Louis in 2010. He is starting medical school in 2011.

Although Nannan is mainly immersed in building spaceships and post apocalyptic worlds, occasionally something pretty pops out of his creative mind, like these flowers made of octopus legs. 😮 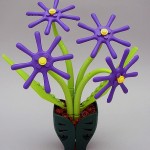