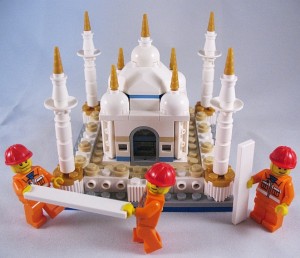 Okay, so today I have entered the 2011 Toys-N-Bricks Micro-Build Tournament! The challenge was to pick an official LEGO set from a pre-determined list, and build a micro-version with no more than 200 pieces.

I choose the Taj Mahal because of its incredible beauty (both the real and the LEGO version) and because I knew that it is going to be a challenge to build such a huge set in a micro scale – and I like a good challenge! 😉 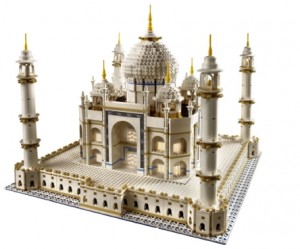 Although I have entered other LEGO contests before, I was particularly excited about this one, as micro is my favorite building scale! (You may want to check out my post on microscale building with LEGO.) Oh, and the prizes for this contest are super sweet! With the Grand-Prize being the LEGO Maersk Train, and for 2nd place 10 Series 3 and Series 4 LEGO Collectible Minifigs! 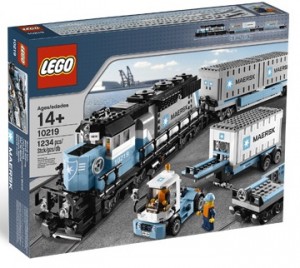 The real-world Taj Mahal has an amazingly delicate structure – mixing Persian, Indian and Islamic elements – born out of the great love and devotion of the Mughal Emperor Shah Jahan for his wife who died at childbirth. In addition the LEGO Taj has some added intricacies not seen in the original Taj Mahal. 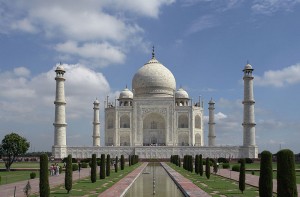 I knew I was heavily restricted by the part-count, but I wanted to incorporate at least the following unique features of the LEGO Taj into the micro version:

I also focused on:

In summary, although this was not a requirement, I wanted to create something that could pass for an official LEGO mini-set.

When I work on a new project I often use a combination of building with real LEGO pieces and using LEGO’s Digital Designer (a free software for virtually designing with LEGO). I’m a hands-on person, so I like to play around with real bricks, however I don’t have an unlimited LEGO collection like Nannan. Therefore I may complete a design in LDD to get an overall feel for the project. LDD is also great to play with color and part choices, and to create an accurate “shopping list”. (Great if you are on a budget!)

My first design for the micro-version Taj came to around 250 pieces, so I had to start scaling down to the bare essentials without loosing too much of the unique features. (Please note; I could not locate the little unicorn horns in LDD, so I used some other pieces for the spires while designing.)

Originally I had a wider base with a more detailed connection between the frame and the inner layer – this was one of the places where I pulled parts from to get below the 200 threshold. I still prefer this first version. 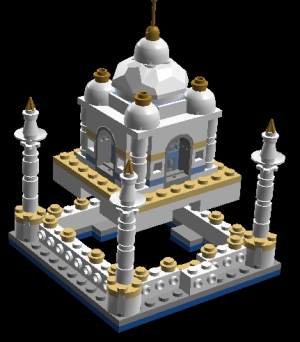 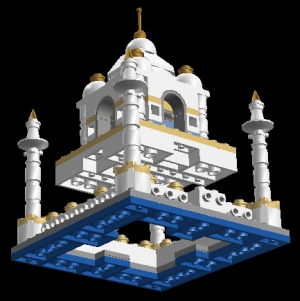 Although I could have eliminated it all together to lower the piece-count, I wanted to keep the double-plate layer at the bottom (representing the blue baseplates of the full-version Taj, with the white layer over it).

I choose to use light-bluish-gray for the second layer to differentiate it from the white walls while remaining in the color-scheme of the LEGO Taj – otherwise, using all white on such a small scale, it would have made it hard to differentiate the details. (I used tan for the inner-courtyard for the same reason.)

An other idea I had to differentiate the inner and outer courtyards and the walls is to use tiles (thereby using a different texture) – this turned out really nice even in white, but again; too many pieces! 🙁 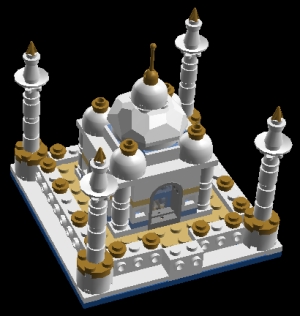 The grilled tiles were also a nice option – and in fact closest to the large version of the Taj, but again; too many parts. 😥 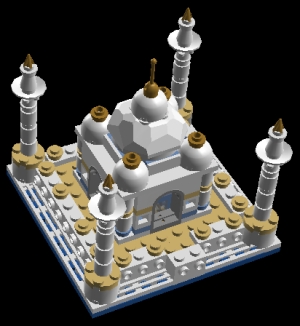 I also wanted to keep the four little “feet” the building rests on, even though this added extra pieces – not good when I’m trying to cut down! But without the feet the model would be hard to pick up; with the building just falling through the hole. Again; I wanted to keep this functional as a set. 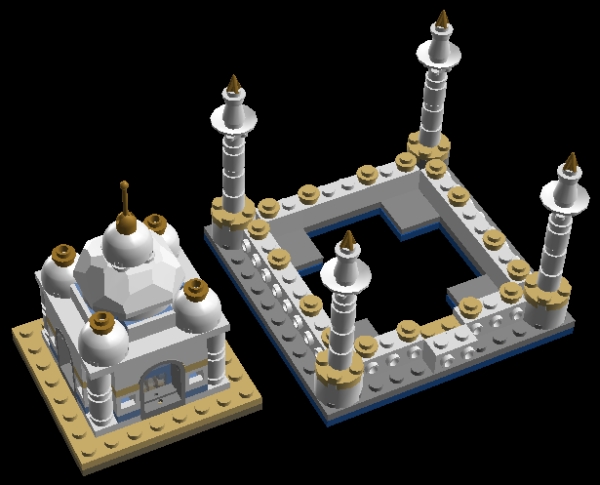 I was very intrigued by the blue line running around the walls, doors and central dome of the LEGO Taj, and I definitely wanted to keep this feature in the micro version.

I choose to use light-bluish-gray door-frames to represent the gray line around the doors in the full-version LEGO Taj. 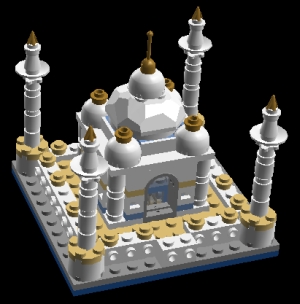 I also worked quite a bit to get those windows right! I wanted to have that nice shine-through effect the large version has. I used trans-clear plates and a trans-clear inner column so light can shine all the way through the building. 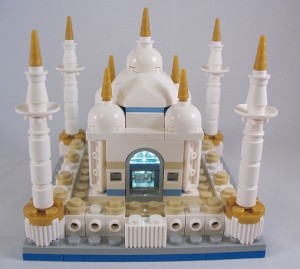 As you can see on the final design; the base, the building and the dome separates just like in the original LEGO version. I was also able to keep the color scheme pretty accurate. 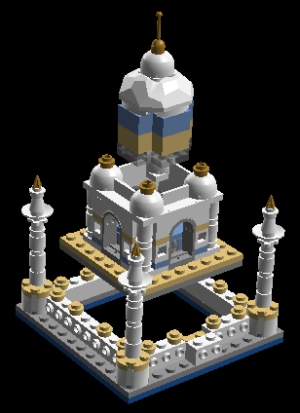 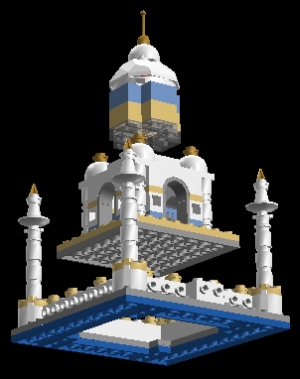 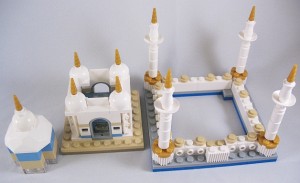 On the final design – again; due to piece-count restrictions – I have changed the corners of the building to 1×3 plates instead of the round bricks. They are held in place only by friction. They hold up pretty well, but if you shake the building too much they will fall out. 😕 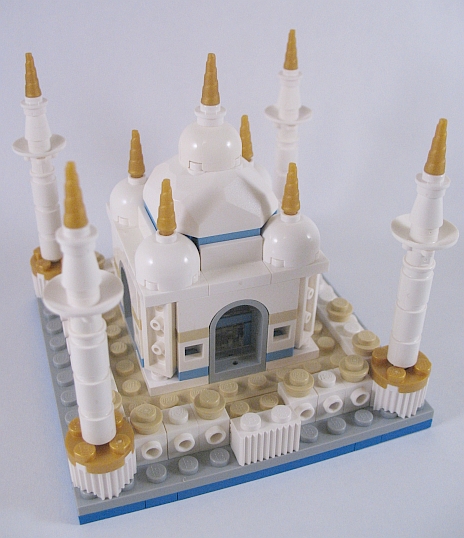 So there you have it! The micro Taj Mahal! Wish me luck at the contest! 😉 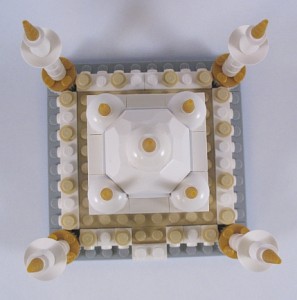 BONUS: I also made a light-up version of the Taj with a standard LEGO light-brick. If you press down on the middle dome, the inside will light up! 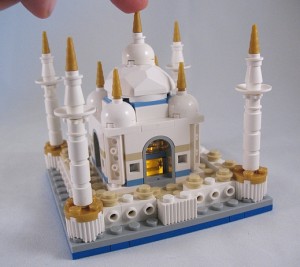 Oh, and I almost forgot to mention that according to legend, Shah Jahan was planning to build an other mausoleum – this one for himself – right across  the Yamuna river from black marble. Unfortunately he died untimely – killed by one of his own sons! 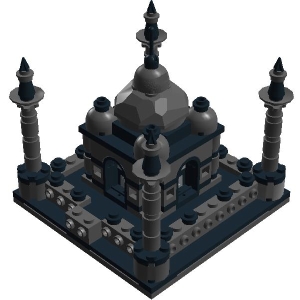 But in case you were wondering how it would look like, here is a micro Black Taj! Would have been nice across from the white one, isn’t it? 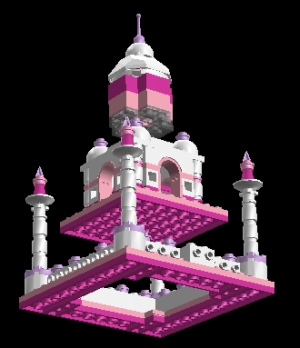 Just getting a bit silly at the end… 😈