The quest for my LEGO childhood… 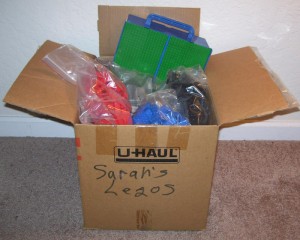 Oh, dear! I found my childhood LEGO collection, and it was right in my own garage!!! I feel so stupid, yet so happy! 😮

Okay, let me back up so you can understand why this is such a momentous occasion.

I think I started playing with LEGO when I was about 10 and continued until I was about 16. I stopped playing much with them, but kept my LEGO collection boxed up in my bedroom closet. Even when I was getting rid of my childhood toys, I insisted on keeping the box of LEGO in the guest-bedroom and I kept a few of my own constructions on the shelves in my room.

It was all there until I moved out of the house when I got married at age 25, and moved to an apartment with my hubby. I’m not sure where the box went from there, but somehow it ended up going with us three years later when we moved to a duplex. It was put up in a shelving unit in the garage with several other boxes, with the label towards the wall. The boxes were promptly forgotten about, though we had good intentions to go through them all.

Then a year later, we re-discovered LEGO together and I started my search for my collection, not knowing it was in the garage. We went through my dad’s storage locker and found a lot of my old toys, including a box of LEGO boxes. At the time, we didn’t keep those, which I later regretted, but now realize that we’d have no room to keep anyway.

Then the storage locker got full so I couldn’t get back in. Then months passed and my dad informed me that he had cleaned it out and I could now get into the back. But I procrastinated many months which gave him time to fill it up again.

That lead to a recent Saturday afternoon of going to the locker, spending an hour trying to move what we could, but finally giving up. When we came home and pulled into the garage, Will wondered out loud about the miscellaneous boxes we had on the shelving unit that we had never gotten around to sorting.

We had dinner, did a few things and finally started pulling out boxes from the garage. The first box was an odd assortment of grade-school papers, kids’ magazines & comics, baseball cards and… LEGO instruction manuals! 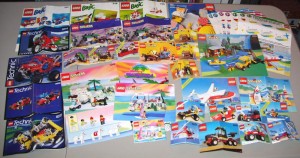 I was so happy that I could have stopped there! At least then I knew what I had as a kid so I could recreate it! 😀

But there were more boxes. Some we quickly determined were books, so we put them back. Finally, on the top shelf was a box with no identification on the side sticking out. Will pulled it off the shelf and showed me the other side. It clearly read “Sarah’s Legos.”

I was so stunned! And so mad at myself! I’ve been searching for nearly 2 years and had them the entire time! 😳 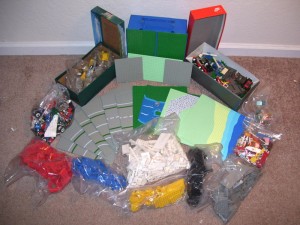 As I pulled bags of LEGO pieces out of the box, I quickly realized that I haven’t changed much since growing up; I’m an organizer at heart and every bag contained a single color of pieces or single type of pieces. There’s even a shoe-box with minifigures and a few sets that I had left together. There’s also the storage box I remember quickly out-growing. 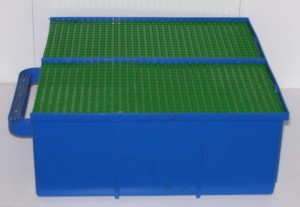 And the best thing was finding a creation I didn’t remember making – a female centaur! I think I did a pretty darn good job, if I do say so myself! 8) 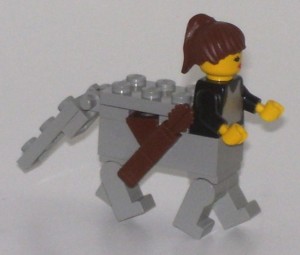 I can’t wait to clean the pieces and start rebuilding my LEGO childhood that, somehow, was never very far from me, just a bit forgotten.

Now that I have shared my story, I have a question for you! 😉

Which LEGO themes or sets do you remember playing with as a kid? Do you have any memorable creations that you built? And the biggest question of all – do you still have your childhood collection? Please post your responses in the comment section below. I’d love to hear other AFOL’s stories! 🙂