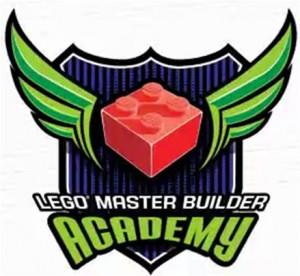 I know the new LEGO Master Builder Academy is aimed at young kids, but as a newer Adult Fan of LEGO (AFOL), I also knew I needed to work on my LEGO building skills – which are pretty non-existent. So I went ahead and bought Kit 1 – Space Designer, even though I didn’t care much for the color scheme of lime-green and purple. 🙄 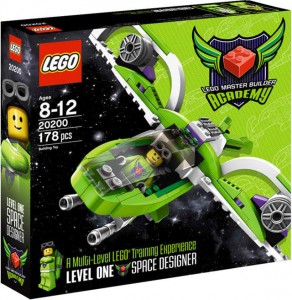 Reservations aside, I opened the box, sorted out the pieces and started reading the book. The LEGO MBA book is very nicely done. It has a lot of information, lots of pictures and is very user-friendly. The intro section was actually worth reading, in my opinion. Same with all the extra stuff at the end.

Without hesitation, I started building the different LEGO creations according to the instructions, being very careful to read all the tips and tricks. Throughout the instructions, there are tips that reinforce the two main techniques that this kit endeavors to teach. One is the technique of locking and the other is sideways building. 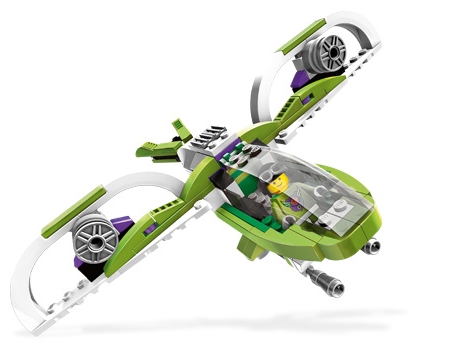 Locking is a very important and basic technique. Simply, it’s to overlap pieces to make a structurally sound and stable creation. Let’s say you have two wings that attach to the ship. To ensure that those wings stay on, you’ll want to overlay the attachments with additional pieces. This technique was one that I already knew and have used in my previous creations. 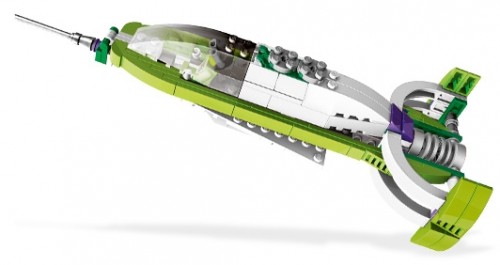 Sideways building is a trickier technique to learn, but can result in some very impressive LEGO creations. Using pieces that have studs on the side, you can build outwards from your creation, adding depth and texture. I understood this on a simple level of taking a plate and building out from it. But when the design showed the sideways build attaching to the ship at different depths, I was utterly confused as to how to figure that out. So lesson half-learned for me. 😐 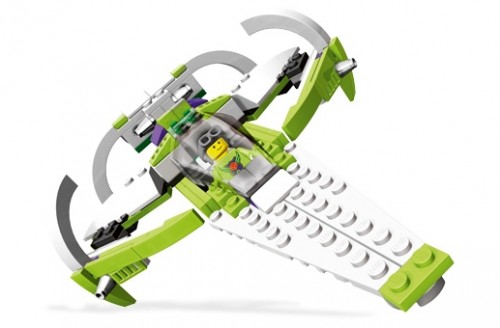 After building those three and taking them apart, I felt ready to try my own free-build. I had lots of ideas for cool yet simple sideways builds and awesome back-end details. But I kept having trouble with attaching the canopy. I could not figure out how to properly align that thing with the front end of the ship, nor get the height right for the clip to attach to the back end. 😕

Completely frustrated, I took my cool elements apart and gave up… for the moment. I remembered then that there was some online stuff to do. I didn’t expect it to be anything cool, but I hoped that I’d find some inspiration to create my own LEGO ship. 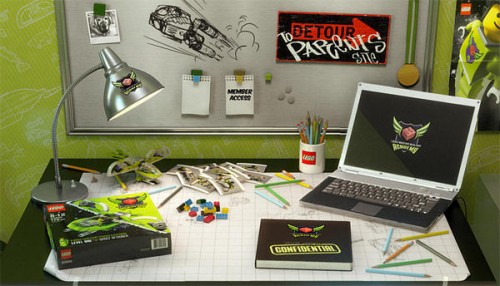 When you go to the LEGO MBA website, click member access and register with the code from the book, you’re taken to a virtual work-desk with many interactive elements. For now, it’ll be customized for the LEGO MBA Space Designer kit. If you subscribe to kits 2-6, you’ll receive a code to enter online and it’ll change the work-desk to each kit as they are released. 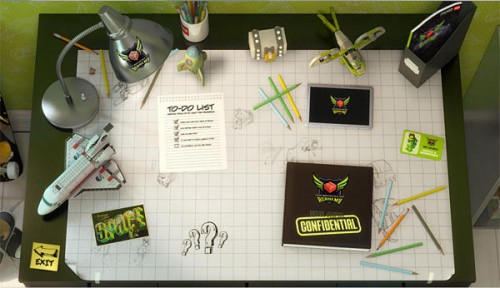 The to-do list is one the best places to start, giving you a bunch of things to do to explore the website. It felt a little hokey at first, being an adult and exploring a kid’s site, but I ended up having a lot of fun. There were more tips and advice as well as videos, articles and quizzes.

The articles are really nice as the LEGO Master Builders go in-depth on how they design, and the process they go through to build something. You can earn badges and if you earn all of the badges, you unlock a certificate of completion that you can print out. I’m sure that will mean more to younger kids, but I still thought it was cool. 😛 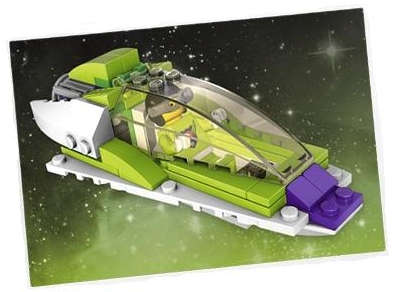 Also in there, I finished enough of the to-do list to unlock the first version of the LEGO brick-paper. This is handy paper to print out and design your creations on before building. This is different from normal graph-paper in that every line represents the height of a plate and every three lines represent the height of a brick.

Apparently, later on, there will be another version of the LEGO brick-paper because this one is intended to be used to build up and down, from a side view of your creation. Though it can be used very effectively for sideways building. Here’s the brick-paper version 1 to download: LEGO Brick-Paper 1

One of the last things I did on the LEGO MBA website was to look at other people’s designs and rate them. You have to rate 10 creations to earn a badge. While I didn’t care much about the badge, I did care about seeing what other people built to hopefully get some inspiration, which I did. The first creation I looked at did not use that blasted canopy!

I jumped for joy at realizing that I did not have to use any particular piece if I did not want to. I know that sounds a little stupid, but I was stuck in a mindset that I had to create a LEGO space-ship that was like the ones in the book. It was a very freeing moment to realize that I could do what I wanted and it would be perfectly fine. 🙂 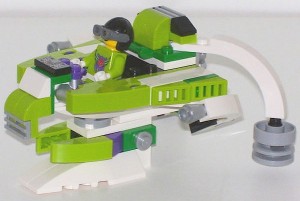 Thus I started my free-build creation with only the concept of using the large white arches in the back for guns and engines. I knew I wanted the front-end to be rounded and very detailed. I actually was getting over my distaste of the lime-green and purple and started using them effectively.  😮 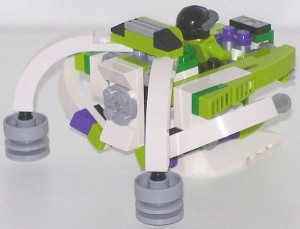 I was much better at the locking technique than the sideways building, but I still used the latter technique, but just kept it simple. Where I got complex was the back end because I wanted the guns and engines to move. 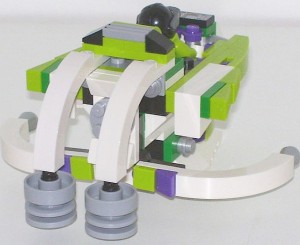 The guns are attached with hinge-plates while the engines are a much simpler design. I used a 1×4 area, put the engines on the end studs, leaving the two studs in the middle open. I then put a 1×4 plate over the white arches, locking them in, but still allowing them to move side-to-side. 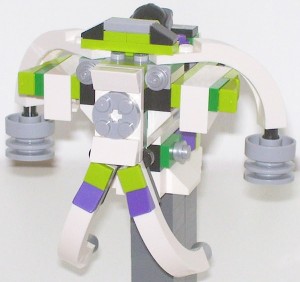 All in all, I am very proud of my LEGO Star Defender. I built it completely on my own, without my husband’s help. This is a first for me as an adult. Although I will give him credit for helping me come up with a name, he didn’t give me any building advice. I used everything I had learned from the LEGO MBA book, but without copying anything in there. 😉 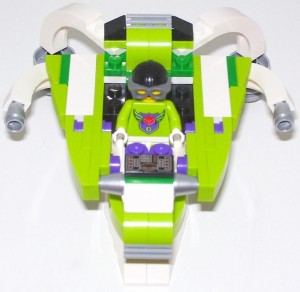 And I’ll tell you, when I first saw this LEGO MBA Space Designer, I almost didn’t get it because I’m not all that interested in the space-theme and I didn’t like the colors. Now, I’m very glad I bought it and I have already subscribed to the rest of the LEGO MBA kits. This has helped me more than anything so far in developing my LEGO-building skills. It may have been designed for kids, but it can be helpful to adults who need it. I’m certainly one of those adults that needs all the help I can get! 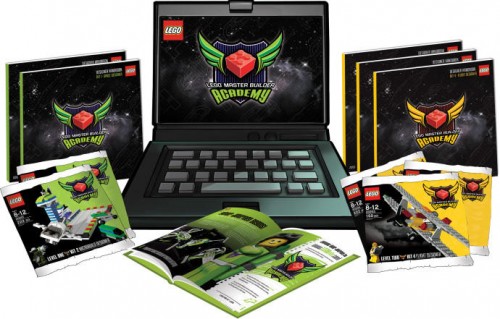 Now some questions for you, dear readers. Do you plan to buy or have already bought the LEGO MBA Space Designer for yourself? If so, what do you expect to learn from it or what have you learned from it?

On another track, is there anything you’ve run across that has really helped you develop your LEGO building skills? If so, please share below what it was and if it’s available online, please post the link. 🙂