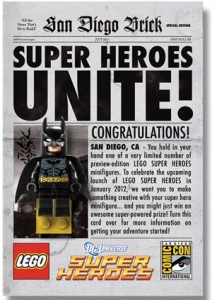 You may have heard the news by now! Scheduled for 2012, LEGO is releasing two new licensed themes under the name; LEGO SUPER HEROES. The licenses are with DC Comics from Warner Brothers and Marvel Comics from Marvel Entertainment.

Here are the press-releases with all the exciting details!

Two of the world’s most iconic brands are joining forces as The LEGO Group, world leader in high quality construction toys, and Marvel Entertainment, LLC, a global character -based entertainment company, announced a wide ranging strategic licensing deal. Through the multi-year agreement starting as of January 1st, 2012, Marvel has granted LEGO Group the rights to develop a distinct Marvel branded construction toy collection — LEGO SUPER HEROES — which will bring the characters, vehicles and action of Marvel’s renowned universe to the world of LEGO build-and-play adventure. The LEGO SUPER HEROES Marvel collection’s initial construction sets, minifigures and buildable characters are scheduled to launch in May of 2012.

“Our partnership with Marvel helps us continue to deliver some of the best and most constructible Super Hero stories of all time,” said Jill Wilfert, vice president, licensing and entertainment for The LEGO Group. “We’re thrilled to partner with Marvel to create creative, constructive play sets for builders, fans and collectors alike.”

Joann Mclaughlin, Executive Vice President Toys & Hardlines, Marvel Entertainment, commented, “The partnership with LEGO Group furthers Marvel’s strategy to align our brand with the best in class leaders across various industries who have the global marketing expertise and distribution clout to stand out in the retail environment. This deal solidifies the already robust presence of our characters and the overall Marvel brand in the ever important toy category.”

Warner Bros. Consumer Products (WBCP) with DC Entertainment (DCE) and The LEGO Group announced today the extension of their successful partnership to translate some of the world’s most popular DC Comics Super Heroes into the world of LEGO® build-and-play adventures with LEGO DC Universe SUPER HEROES. The multi-year licensing agreement grants the world leader in high quality construction toys access to the entire library of DC Comics characters and stories to inspire LEGO building fun. Construction sets, minifigures and buildable characters and creatures inspired by the universe of DC Comics are slated to launch in January 2012. 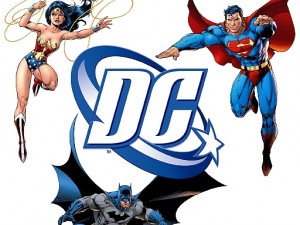 “We have enjoyed a successful, longstanding relationship with The LEGO Group and this agreement enables the vast universe of DC Comics to inspire an array of incredible offerings,” said Karen McTier, executive vice president, domestic licensing and worldwide marketing, Warner Bros. Consumer Products. “Fans of our legendary Super Heroes and villains will be delighted with the uniquely imaginative creations which only LEGO Group can create.”

The company will revisit their previous successful collections like LEGO BATMAN that also inspired the best-selling LEGO BATMAN: The Videogame, published by Warner Bros. Interactive Entertainment, which has sold more than 12 million units worldwide since its launch in 2008.

“Given the fan enthusiasm for previous LEGO BATMAN collections, we couldn’t be more thrilled to continue the build-and-play adventures with new LEGO BATMAN play sets and the addition of other DC Comics properties,” said Jill Wilfert, vice president, licensing and entertainment for The LEGO Group. “This partnership gives builders a chance to recreate the characters, vehicles and worlds of some of the most iconic Super Heroes, so they can relive the action and even customize it – a proven and winning formula in LEGO construction.” 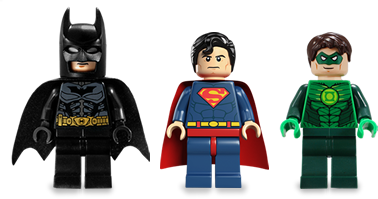 At San Diego Comic-Con, 3,000 exclusive Batman and Green Lantern LEGO minifigures will be distributed to kick off a promotion that will take place from August to December in advance of the launch. Fans are encouraged to use their collectible minifigures and existing LEGO collections to create original LEGO DC Universe SUPER HEROES adventures through video, photography or illustration, then share their submissions on www.LEGOSUPERHEROES.com.

Entrants have a chance to win monthly prizes or a grand prize trip to California for exclusive tours of Warner Bros. Studios, WB Animation and LEGOLAND California. 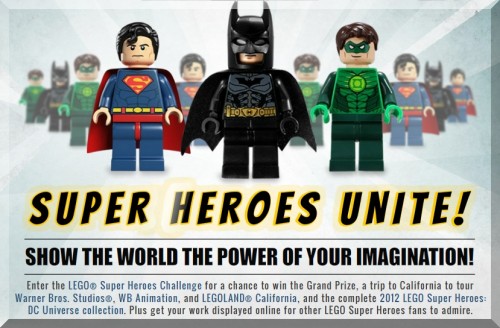 Exciting, isn’t it? To see photos of the new minifig prototypes from Comic Con, check here: LEGO SUPER HERO Minifigs at Comic Con. What do you think? Feel free to share your thoughts and discuss in the comment section below. 😉