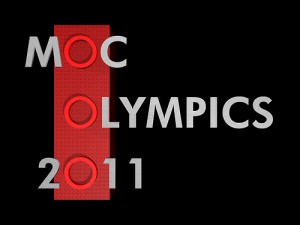 If you love the fun, excitement, pressure, pride and prizes that comes with a LEGO contest get ready for this one! For the past 3 years, MOCpages (one of the largest LEGO picture-sharing sites) have been hosting an exciting LEGO building tournament called MocOlympics. And this year’s MOC Olympics is just about to begin!

➡ THE CONTEST: MocOlympics is a single-elimination tournament where players are pitted against one another in different categories. Round one is referred to as the “free-for-all” round of this LEGO contest that anyone can enter. In this round members will be able to choose one of the specified categories and build an entry for that category. Entries will be judged on a point-based system.

Only the top 64 players will go on to round two. Round two will begin the one-on-one contests between contestants in various categories and continue in the elimination process until there is a single MocOlympics Grand Champion! To read the details go to the MocOlympics website. And to really get you in the mood, check out this teaser-trailer for the contest, then read further details below.

➡ THE DATE: Round one will begin on Sunday, September 4th. Round one will last for 10 days. After those 10 days are up, the judges will tally the scores and place the top 64 players in matches for round two. Round two will start about three days after the end of round one (the actual date will be announced later). There are 7 rounds all together in the span of about 3 months.

➡ THE RULES: Only new LEGO builds are allowed. No LEGO Digital Designer (LDD) creations. Photoshop is allowed if kept to a minimum. BrickArms, BrickForge and other LEGO-compatible brands are allowed as an enhancement to your contest entry. Read more about the rules on the MocOlympics website.

➡ THE PRIZES: Check out these sweet rewards for the winners! (To read more about the prizes go to the MocOlympics website.)

➡ THE RESISTRATION: Are you all excited and ready to enter? Head over to the registration page at the MocOlympics website.

Let us know if you are planning to participate in this exciting LEGO contest! We will wish you the best of luck in the games! Also, you may want to check out Tips for Winning a LEGO Contest. Oh, and if this particular LEGO contest is not your cup of tea, remember that the Eurobricks Western Contest is still in full swing!

UPDATE: The MOCPages.com website no longer exists. thus we had to remove all links to the site.

Next post: Cute LEGO minifigs… hm… are you sure???