In this post I will list all of the sets in the LEGO Friends theme, and you can check out large and detailed images for the upcoming LEGO Friends sets here: (removed by the request of TLG) 😥

Please note that these are leaked images that will probably be taken down soon due to the fact that they are still considered confidential – thus the public isn’t supposed to see them just yet. So if you want to check them out, do so while you can!

In case you can no longer see the images, I will also describe them here as much as I can, so at least you get a sense of what 2012 LEGO sets look like. Now back to the new LEGO for girls line called ‘Friends”! 🙂

Through the years LEGO has been making some effort to appeal to little girls with lines like LEGO Scala, LEGO Belville, and LEGO Paradisa. In 2012 they are trying a new angle yet again with redesigned figures and a new story-line. 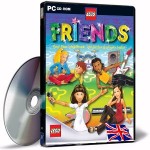 This new LEGO for girls theme is called “Friends”, and is following the story of five girls in their daily lives. The girls have different likes and hobbies; there is an animal-lover, a smart-girl, a beautician, a singer and a social-girl. (The LEGO Friends theme is in fact not new; in 1999 LEGO released a video game with the same name and also five girl characters.)

The new LEGO Friends figures are not regular LEGO minifigs, but are specially designed to appeal to girls. At least that is the idea. They appear to be the same size, or perhaps slightly taller than regular minifigures, but with very different proportions and no resemblance to regular LEGO minifigs. 🙁 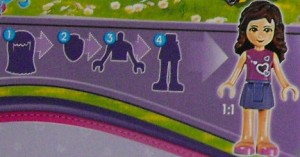 The sets come with lots of minifig accessories, lovely colors, new animals and some other new elements that should be exciting to LEGO fans!

So what do you think? Are you excited about the new LEGO for girls sets? Do you think it will be popular? Or did LEGO miss the mark? Share your thoughts below! 😉