by Thita (admin) on September 13, 2011
in Community Articles 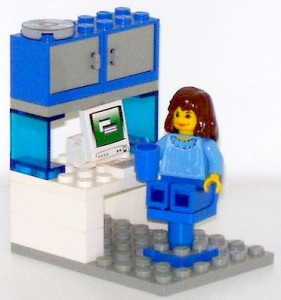 When I originally thought about writing this series of posts, my first thought was that I wanted to tell my story as a female LEGO enthusiast.

While I ended up writing that first, my next thoughts of talking to other women about their experiences took precedent and thus I put out the call for feedback first in the The World of Female LEGO Fans – Part 1. I’m gathering those responses now and will be writing more posts the world of female LEGO fans. In the meantime, here are my feelings and thoughts about why I play with LEGO. 😉

For me, I enjoy the hobby of LEGO for the social experience and creating a story with my LEGO building.

Most of my experience with LEGO is with my husband. When we buy a new set, we build it together. It’s the process that we go through, the shared time and being close that I really enjoy. He enjoys sorting the pieces so that he becomes familiar with new elements for his own building projects. I have the instructions and ask him for pieces. While I do like the building process, I don’t usually pay much attention to how something is built (which does not help me learn new techniques, I know). I look at the process of how seemingly random pieces become something – the experience of doing. 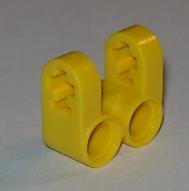 Example of a piece that I can never remember what it’s called: “Technic Axle & Pin Connector Perpendicular Double Split”

Often times after we put together a new set, Will plays with it for a while and then I put it on a shelf. I’ll admire it, but I didn’t build it to play with. I built it for the experience and the display. I do like to show it off to people who come over, but I usually introduce it as something Will and I put together. I focus on the social doing of the hobby, not the product of the hobby. I enjoy the banter between my husband and I – especially when I can’t remember what a piece is called and try to describe. Oh, are those funny moments! 😀

As for when I do build on my own (which is rare) or with my husband (which is more often), I focus on the story that I can create. In fact, I often have ideas about minifigures and specific accents before we address the main structure and how it’s going to be built. And when Will builds on his own, I come in at the end to do exactly what I like to do – add details and a story.

1. When we built the Mystical Elven Tree Shrine, I had ideas of what minifigures to use and what I wanted on each level of the tree so that the story of the place would make sense. It had the shrine/mystical pool on the first floor, then sleeping quarters on the second and then the armory/war room on the third floor. And I wanted it all to connect with ladders. Yet, I had no idea on how to build the tree – that was Will’s job. He crafted the foundation and is very proud of what he built. I added the details to create the story and that’s what I’m very proud of. 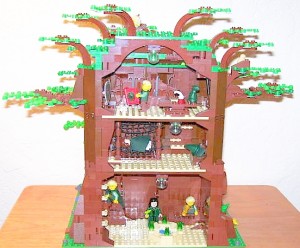 2. When Will spent all night building an unidentified large white building, I was the one who swooped in and gave it a story. Without any planning, he knew he wanted to build a big building out of white and clear pieces. I came in at the end and confirmed that it was a Cathedral. I created the stained glass window of the heart (prominent story element) and the bride and groom in the front. I posed them so that the bride is dragging the groom out, happy and excited to get on with their new life together. Later, we did have to change it away from the religious connotation, so it became the King and Queen of Heart’s Palace using the red king and queen. Again, I focused on crafting a story. 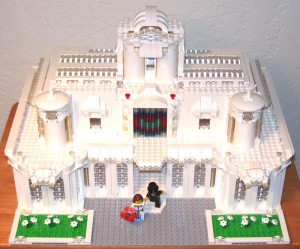 I have many ideas for creations floating around in my head. Stories I want to tell through the medium of LEGO. Once I create these stories, I’ll feel satisfied from the process and then move on to my other desire to socialize. I’ll end up showing my creation to as many people as possible and sharing my building process and experience.

As I’ve said, my next series of posts on this topic will be to share other women’s thoughts, feelings and experiences about LEGO. At some point, I hope to do a kind of summary post on that will take all of the research and synthesize it into a (hopefully) succinct entry. I know it will still be a generalization, but sometimes that’s needed to start understanding a topic. 🙂 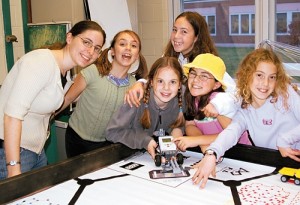 I would like to thank all of those who responded so far to the previous posts here and at other forums. Your responses help me understand other female LEGO fans – and even myself – better. And if you haven’t shared yet, but would like to, please post in the Comments section below or send me a private email, if you prefer. And let me know if I can quote you directly. Otherwise, I will utilize your comments in my generalizations and you’ll remain anonymous.

Also, if anyone knows of others who’s done similar research on the world of female LEGO hobbyists, please post links to the articles/blogs. I would love to know what has already been done on this topic.