As the title says; the LEGO Lord of the Rings website is now open! Not a whole lot yet on the site, but you can read a bit on all of the main Lord of the Rings good-guys. I included all of them here, with their bios. In case you have trouble reading the small text on the pictures, the same description can be found below them. Enjoy! 🙂 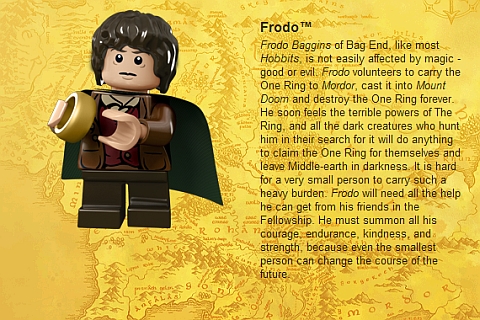 Frodo Baggins of Bag End, like most Hobbits, is not easily affected by magic – good or evil. Frodo volunteers to carry the One Ring to Mordor, cast it into Mount Doom and destroy the One Ring forever. He soon feels the terrible powers of The Ring, and all the dark creatures who hunt him in their search for it will do anything to claim the One Ring for themselves and leave Middle-earth in darkness. It is hard for a very small person to carry such a heavy burden. Frodo will need all the help he can get from his friends in the Fellowship. He must summon all his courage, endurance, kindness, and strength, because even the smallest person can change the course of the future. 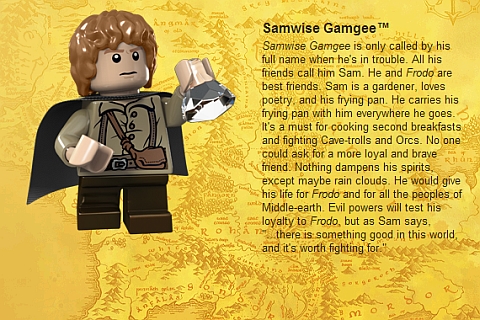 Samwise Gamgee is only called by his full name when he’s in trouble. All his friends call him Sam. He and Frodo are best friends. Sam is a gardener, loves poetry, and his frying pan. He carries his frying pan with him everywhere he goes. It’s a must for cooking second breakfasts and fighting Cave-trolls and Orcs. No one could ask for a more loyal and brave friend. Nothing dampens his spirits, except maybe rain clouds. He would give his life for Frodo and for all the peoples of Middle-earth. Evil powers will test his loyalty to Frodo, but as Sam says, “…there is something good in this world, and it’s worth fighting for.”

➡ LEGO LORD OF THE RINGS – PIPPIN: 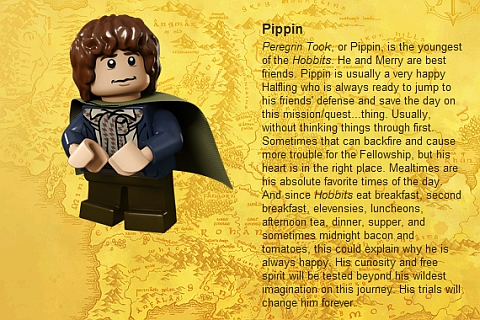 Peregrin Took, or Pippin, is the youngest of the Hobbits. He and Merry are best friends. Pippin is usually a very happy Halfling who is always ready to jump to his friends’ defense and save the day on this mission/quest…thing. Usually, without thinking things through first. Sometimes that can backfire and cause more trouble for the Fellowship, but his heart is in the right place. Mealtimes are his absolute favorite times of the day. And since Hobbits eat breakfast, second breakfast, elevensies, luncheons, afternoon tea, dinner, supper, and sometimes midnight bacon and tomatoes, this could explain why he is always happy. His curiosity and free spirit will be tested beyond his wildest imagination on this journey. His trials will change him forever. 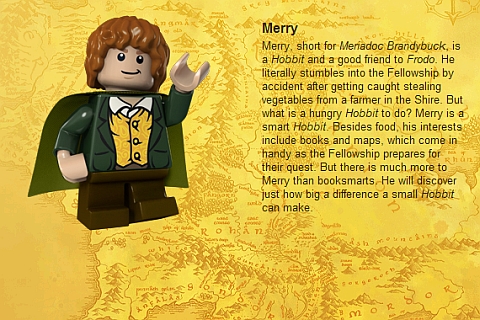 Merry, short for Meriadoc Brandybuck, is a Hobbit and a good friend to Frodo. He literally stumbles into the Fellowship by accident after getting caught stealing vegetables from a farmer in the Shire. But what is a hungry Hobbit to do? Merry is a smart Hobbit. Besides food, his interests include books and maps, which come in handy as the Fellowship prepares for their quest. But there is much more to Merry than booksmarts. He will discover just how big a difference a small Hobbit can make.

➡ LEGO LORD OF THE RINGS – GANDALF: 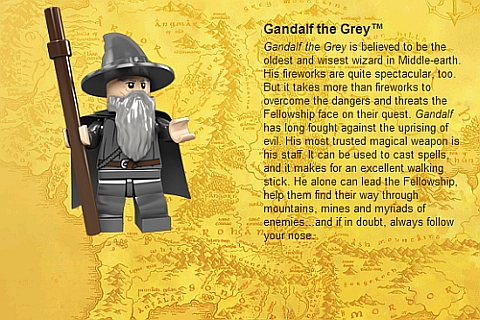 Gandalf the Grey is believed to be the oldest and wisest wizard in Middle-earth. His fireworks are quite spectacular, too. But it takes more than fireworks to overcome the dangers and threats the Fellowship face on their quest. Gandalf has long fought against the uprising of evil. His most trusted magical weapon is his staff. It can be used to cast spells, and it makes for an excellent walking stick. He alone can lead the Fellowship, help them find their way through mountains, mines and myriads of enemies… and if in doubt, always follow your nose.

➡ LEGO LORD OF THE RINGS – LEGOLAS: 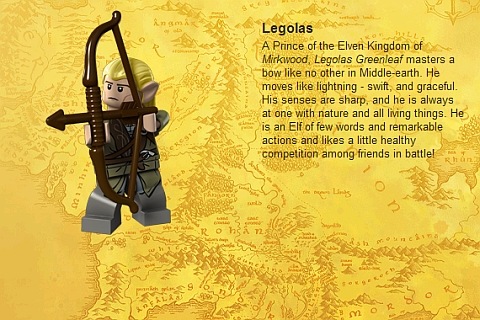 A Prince of the Elven Kingdom of Mirkwood, Legolas Greenleaf masters a bow like no other in Middle-earth. He moves like lightning – swift, and graceful. His senses are sharp, and he is always at one with nature and all living things. He is an Elf of few words and remarkable actions and likes a little healthy competition among friends in battle! 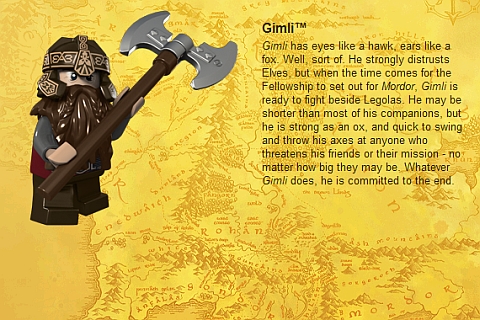 Gimli has eyes like a hawk, ears like a fox. Well, sort of. He strongly distrusts Elves, but when the time comes for the Fellowship to set out for Mordor, Gimli is ready to fight beside Legolas. He may be shorter than most of his companions, but he is strong as an ox, and quick to swing and throw his axes at anyone who threatens his friends or their mission – no matter how big they may be. Whatever Gimli does, he is committed to the end.

➡ LEGO LORD OF THE RINGS -ARAGORN: 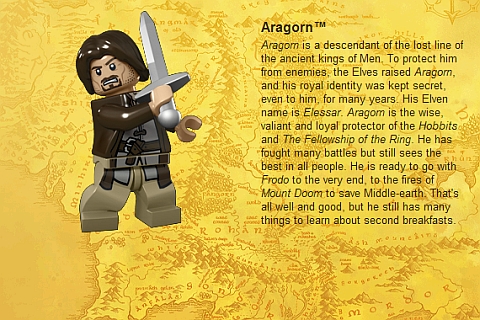 Aragorn is a descendant of the lost line of the ancient kings of Men. To protect him from enemies, the Elves raised Aragorn, and his royal identity was kept secret, even to him, for many years. His Elven name is Elessar. Aragorn is the wise, valiant and loyal protector of the Hobbits and The Fellowship of the Ring. He has fought many battles but still sees the best in all people. He is ready to go with Frodo to the very end, to the fires of Mount Doom to save Middle-earth. That’s all well and good, but he still has many things to learn about second breakfasts.

➡ LEGO LORD OF THE RINGS -BOROMIR: 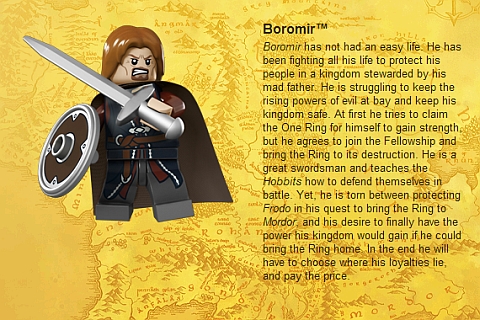 Boromir has not had an easy life. He has been fighting all his life to protect his people in a kingdom stewarded by his mad father. He is struggling to keep the rising powers of evil at bay and keep his kingdom safe. At first he tries to claim the One Ring for himself to gain strength, but he agrees to join the Fellowship and bring the Ring to its destruction. He is a great swordsman and teaches the Hobbits how to defend themselves in battle. Yet, he is torn between protecting Frodo in his quest to bring the Ring to Mordor, and his desire to finally have the power his kingdom would gain if he could bring the Ring home. In the end he will have to choose where his loyalties lie, and pay the price.

➡ LEGO LORD OF THE RINGS HALDIR: 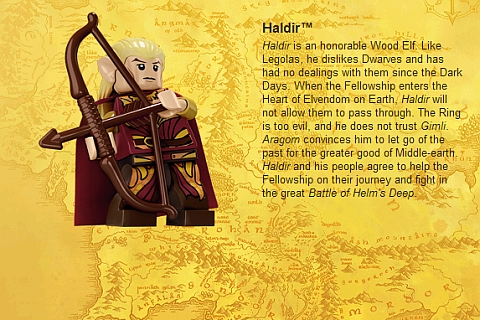 Haldir is an honorable Wood Elf. Like Legolas, he dislikes Dwarves and has had no dealings with them since the Dark Days. When the Fellowship enters the Heart of Elvendom on Earth, Haldir will not allow them to pass through. The Ring is too evil, and he does not trust Gimli. Aragorn convinces him to let go of the past for the greater good of Middle-earth. Haldir and his people agree to help the Fellowship on their journey and fight in the great Battle of Helm’s Deep.

➡ LEGO LORD OF THE RINGS EOMER: 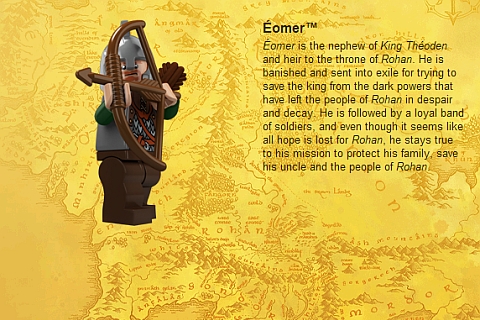 Éomer is the nephew of King Théoden and heir to the throne of Rohan. He is banished and sent into exile for trying to save the king from the dark powers that have left the people of Rohan in despair and decay. He is followed by a loyal band of soldiers, and even though it seems like all hope is lost for Rohan, he stays true to his mission to protect his family, save his uncle and the people of Rohan. 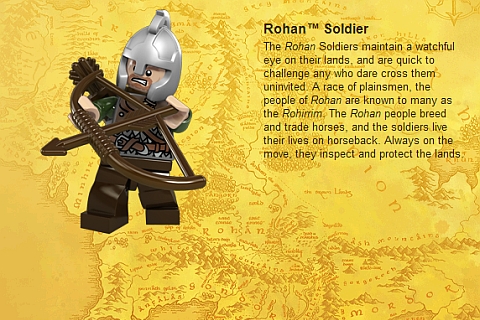 The Rohan Soldiers maintain a watchful eye on their lands, and are quick to challenge any who dare cross them uninvited. A race of plainsmen, the people of Rohan are known to many as the Rohirrim. The Rohan people breed and trade horses, and the soldiers live their lives on horseback. Always on the move, they inspect and protect the lands.

I’m very excited about the LEGO Lord of the Rings line coming out this summer! What about you? 😉

If you would like to learn more about LEGO Lord of the Rings, check here:

And if you would need to brush up on your Lord of the Rings knowledge before the LEGO sets come out, you can pick up Lord of the Rings in both book and DVD form on Amazon. Shipping is free over $25, and there is no tax to most states. See some of the listings below: