On March 16th through the 18th, my husband Will and I attended the Bricks-by-the-Bay (BBTB) 2012 LEGO Convention in Santa Clara, California. It was their third year of the con, and our first ever LEGO-fan convention. I must say, we had a blast! There were some down points, but overall, we thoroughly enjoyed ourselves.

For this blog-post – parts one and two – I will attempt to do two things; one, introduce the concept of LEGO-fan conventions to those who may not be familiar with them, and two, give an overview of BBTB to help those who may be considering going in the next year or so. This blog-post will be broken down by topic rather than a chronological presentation of events. 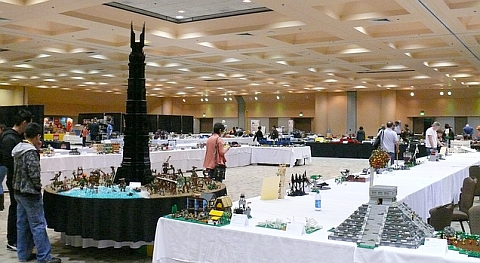 A definite highlight of BBTB and most LEGO-fan convention are the LEGO MOC-exhibits. The creativity on display is simply astounding. There was everything from individual small displays to small group displays to large group displays. I have so many favorites, especially from the Fantasy and Historical section. But if I feature anything, it has to be the group display by OneLUG who did the March of the Ents scene from Lord of the Rings. It spread out over a large round table and the tower of Sauron soared up high above everyone’s head. I don’t know exactly how tall it is, but it has to be a good 5 or 6 feet tall. Needless to say, it won several awards. 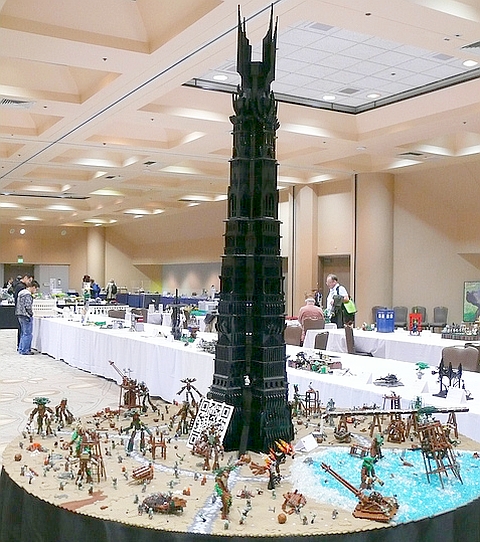 Speaking of awards, I am proud to say that I won one, as did a couple of members of Sacramento Brick Builders (my local LEGO club). While Will and I brought 3 MOCs to display, it was my impromptu rebuilding of the event-kit that won me the Best Event Kit Recycling Award. One of the building challenges was to take the event-kit and build your own creation. I built a micro amusement-park that had two spinning rides. 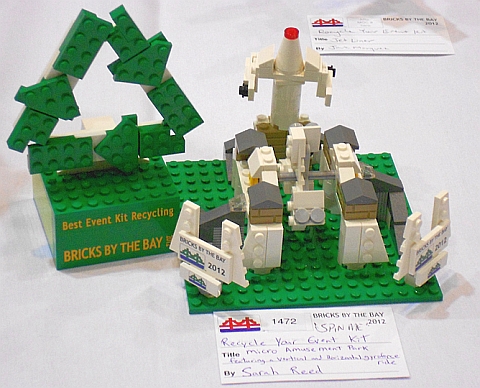 Henry brought several of his cars to display and won Best Large Car Award for the Imperial – an OFSI luxury car. I thought for sure that his semi would win, but the Imperial is very-very cool. 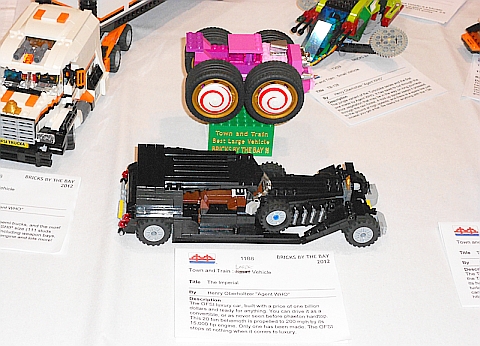 Sue and Brian won the Best Story Telling Award in the Large MOC category for their large LEGO display that told the Adventures of Mary and Bill. The display was a large city inspired by an old Idea Book by LEGO. 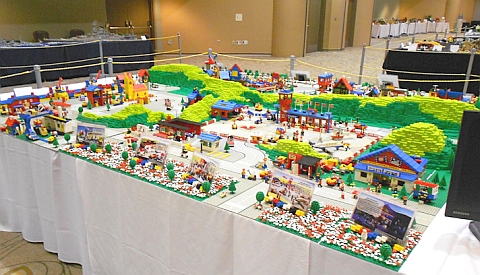 The other part of the ballroom was taken up by LEGO vendors. I wasn’t expecting to buy much because people had told me that things would be marked up. That was mostly true, but we found a few good deals. Will bought some boat-hull pieces and sails for $15. I got us several t-shirts with great LEGO designs for $14 each from BrickShirts.com. I also bought some cool LEGO pumpkin jewelry from Mariann Asanuma. And we did manage to find some old LEGO Fantasy Era Castle sets that weren’t marked up too much. 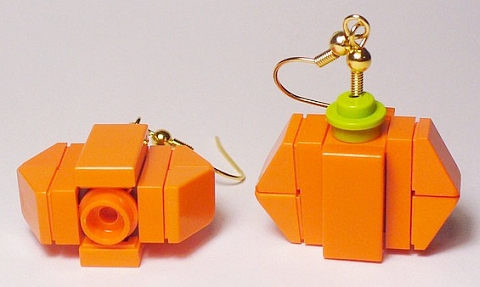 There were a lot of the customizers there including Brickforge, BrickWarriors, BrickArms, Citizen Brick, The Original BrickEngraver and Print-A-Brick. While we usually stay away from customized pieces as we tend to be purists, Will did buy several trench-coats from Cape Madness that were very cool. After the convention, Will also ordered several capes with our club-logo on them so we can make SacBB superheroes for our LEGO club’s superhero city display in November.

One thing that was a bit overpriced, but was way too enticing was the bulk LEGO bricks. Most of it was scratched and dirty, but there were some old LEGO pieces that aren’t always easy to find. The big note here is to make sure to buy on the convention days, not the public day. Friday & Saturday was exclusively for convention attendees with Sunday being the public day. We made the mistake of buying some bulk LEGO on Sunday and the price was greatly increased over what we bought on Friday. 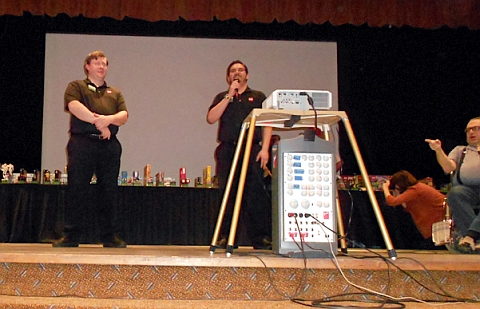 What was supposed to be the highlight of the weekend wasn’t as big of deal because of a leaked video. This is one of the few times that I was actually disappointed that it wasn’t a surprise. What I’m talking about is the upcoming exclusive LEGO Star Wars R2D2 set. LEGO had planned to unveil it at BBTB for the first time, but the video was accidentally posted online earlier that week. So it only surprised a few people who hadn’t seen the video yet. (See full review here: LEGO Star Wars Ultimate Collector R2-D2.) 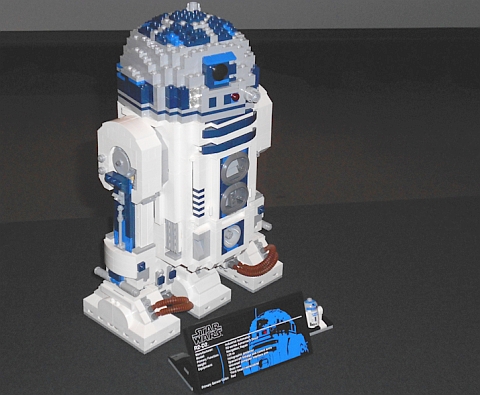 Having said that, it was very cool to see and touch the actual model that was in the video. I’m not a huge Star Wars fan myself, but I do have a weakness for Ewoks. Will only collects the LEGO Star Wars mini models. Still, I have a feeling that we’ll be buying this R2D2 when it comes out. It’s just too cool. 😛

There’s still more to tell you, but for now, dear readers, what do you think about the above portions of LEGO-fan conventions? If you went to Bricks-by-the-Bay, please let me know what you think. Post your comments below. I’d love to hear about people’s experiences and thoughts!

You can watch the above fun video to get a feel for the event, and if you are interested in seeing pictures from the convention, check out Bill Ward’s Flickr Gallery and the Bricks-by-the-Bay 2012 Flickr Group. Also, you may like to read the following posts:

Next post: LEGO NINJAGO Rise of the Snakes Episode 12