In part one of this post, I talked about the LEGO MOC displays, LEGO vendors, ceremonies and awards at the Bricks-by-the-Bay (BBTB) LEGO convention, which happened on March 16th through the 18th in Santa Clara, California. In this post I’ll cover games & activities, seminars, and goodie-bags & LEGO convention exclusives.

My goal with this post is to introduce the concept of LEGO-fan conventions to those who may not be familiar with them, and give an overview of BBTB to help LEGO-fans who may be considering going in the next year or so.

There were a lot of games and activities scheduled throughout the three days of this LEGO convention. I participated in the LEGO board-game tournament and individual LEGO speed-build, while Will (my husband) did 101-bricks. We both really enjoyed ourselves – though an overall comment I have for improvement is that whoever is running the games should be very clear on the rules before starting the game and not switching their mind as the game progresses. 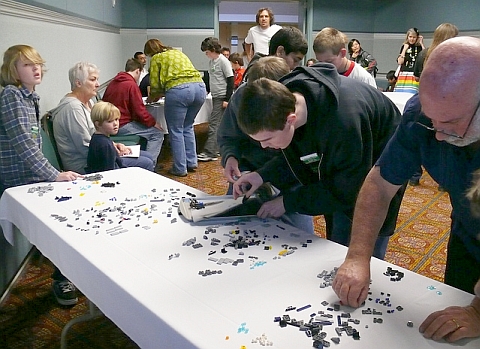 I heard from a friend that this was quite an issue during the LEGO blind-build as the person running it did not know the exact rules and chose a winner that likely should not have won, but my friend wasn’t sure since the decision was made in secrecy and was never explained. Hopefully these issues will decrease as they get more organized in future events.

I also participated in dirty brikster, which is a LEGO version of a white elephant gift-exchange where you wrap a LEGO gift of a certain amount and randomly pick a gift with the possibility of stealing a gift from someone else. I walked away with some Europe-exclusive LEGO polybags, which made me very happy. 🙂

Then we did the small LEGO parts draft, which was the LEGO Friends Olivia’s Tree House. Oh boy, was this a mess! They didn’t schedule enough time, they didn’t split the group of 22 people into at least 2 groups and they didn’t pre-determine lots. So nothing was sorted fairly and the first 6 people to go got the most pieces. Just makes me glad we bought our LEGO Friends sets at 30% off and didn’t participate in the larger parts draft. 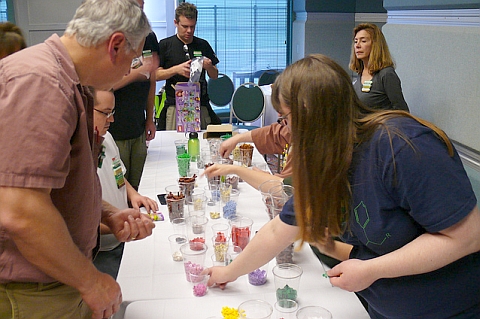 I suggest for the future that the organizers allow more time, do signups and be firm about those, have people drop off their LEGO sets ahead of time so that the organizers can pre-sort the lots to make them equal in value and more fair. Just an idea, but I’m sure the organizers will continue to improve as they do more conventions.

Sadly, we missed all of the seminars except the Expectations from LEGO discussion with Kevin Hinkle. We had actually made an itinerary of what we wanted to do when, but we were always busy enjoying ourselves doing something else when it came time for a seminar. Mostly it came down to me not wanting to sit down yet. I have heard from friends that some of the seminars were worth going to and some not. Seminars depend greatly on the people presenting, and not everyone is a good spreaker/presenter. 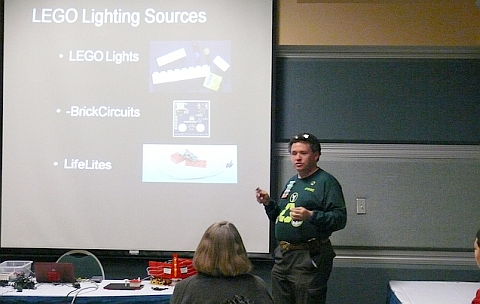 But I am very glad we made it to the discussion with Kevin Hinkle. For those who don’t know, he’s the North American Community Coordinator with LEGO. He works with all the LUGs in North America on various things including helping with and attending conventions. It was great to talk with him as he wanted to know what we expected from LEGO in regards to support and information. I’m so glad Will and I was able to get to know him and start a relationship to hopefully help our local LUG. (See Will’s post on Kevin Hinkle here: Your Bridge to LEGO: Kevin Hinkle – Part One) 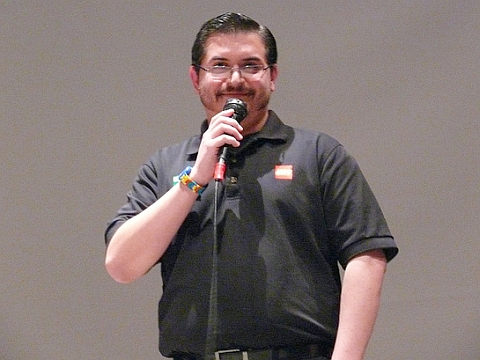 Last, but certainly not least is the LEGO goodie-bag we got when we first got to the event, plus the LEGO convention exclusives we had pre-purchased. The goodie-bag itself was a black & green cloth-bag with the convention info and logo. Inside was a bunch of free stuff, some from the various vendors. 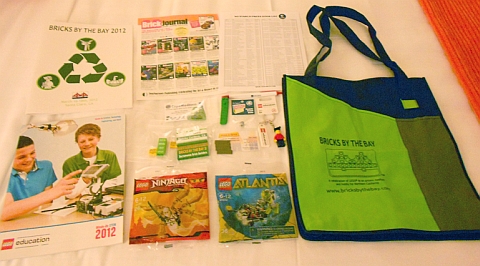 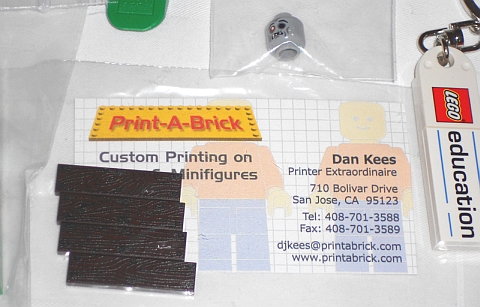 Some of the freebies we received...

We each started with 4 random words. I had Sore Facet Mime and Droid. The point was to meet people and trade for words that you wanted. I managed to get Sore White Jedi Chick by the end of the event, though I really wanted Ninja rather than Jedi, but the young man who had Ninja wanted to keep it.

Will was a bit more random on his and ended up with Claw Road 5 Blues. At one point he had Road 5 7 Blues, which I thought was very cool, but he was nice to a guy at the end who really wanted 7 and so Will ended up with Claw. 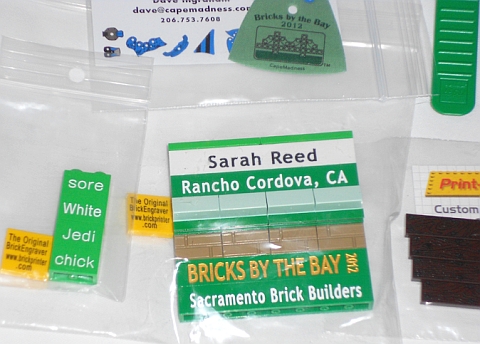 My LEGO badge at BBTB

As for LEGO convention exclusives, we got t-shirts with the recycling logo on it plus images of the three LEGO models that could be made with the event-kit. We got the event-kit, a metal pin with a LEGO brick four-leaf clover printed on it, and a minifigure printed with logo and info. While I know different conventions will have different items, I’m sure that some of the above is pretty standard for LEGO-fan conventions. I know the LEGO brick-badges are a big thing and a lot of people had very long badges because they brought their engraved LEGO bricks from previous conventions. 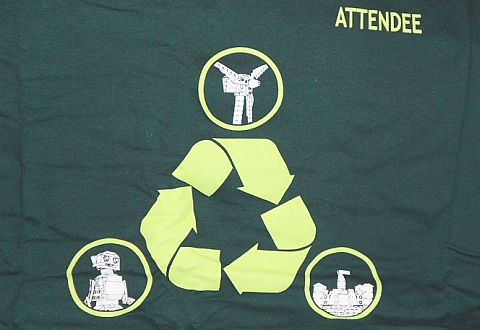 One other thing to mention is the discount we got at the local LEGO store. There were 3 LEGO stores close to the convention site and you could go and get a discount based on how much you spent.  I believe this is going to be the standard for future LEGO-fan conventions.

In the end, we had a blast! It was somehow long yet short at the same time. While it will probably be a couple of years before we go to another LEGO convention, I would go back to Bricks-by-the-Bay. I’d like to see how they grow and change as time goes on. Here is a fun video to summarize it all:

And if you are interested to see more pictures from the convention, search flickr.com for BBTB or BBTB2012. Here is an extensive gallery from BP Ryan with lots of pictures: Brick-by-the-Bay 2012.

Also, you may like to read the following posts:

Next post: LEGO NINJAGO Rise of the Snakes Episode 13