Here are the LEGO Lord of the Rings listings on LEGO’s website. I highly encourage you to check out all the pictures too. They are gorgeous! 😛 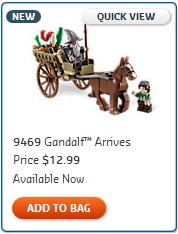 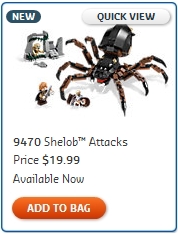 LEGO Lord of the Rings – Shelob Attacks: Escape from the clutches of Shelob’s attack! Plotting to reclaim The One Ring, Gollum lures Frodo into the lair of the ancient giant spider, Shelob. Will Shelob cast her web and capture poor Frodo or can Frodo’s brave hobbit friend Samwise Gamgee use the Elven sword Sting and rescue him in time? You decide! Includes 3 minifigures: Frodo, Samwise Gamgee and Gollum. 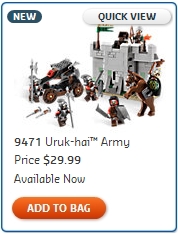 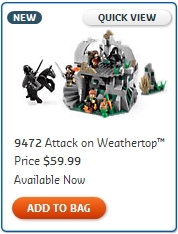 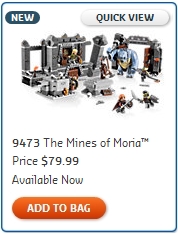 LEGO Lord of the Rings – The Mines of Moria: Battle the Cave Troll in The Mines of Moria! On their epic journey across the lands of Middle-earth, the heroic Fellowship of the Ring travels through the abandoned Mines of Moria. Pursued by the evil Moria orcs and a giant Cave Troll, Pippin, Boromir, Gimli and Legolas make a stand in Balin’s Tomb. Can the heroes hold back the evil horde and make it out of the mine unhurt? 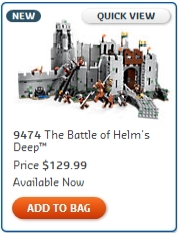 LEGO Lord of the Rings – The Battle of Helm’s Deep: Repel the Uruk-hai army at Helm’s Deep! The walled fortress at Helm’s Deep is under attack by the mighty Uruk-hai army. The forces of men, elves, and a dwarf must do everything they can to stop them from breaching the fortress walls. Can they prevent the Berserker Uruk-hai planting the bomb and blowing up the wall? Will they stop the enemy climbing up the siege ladders? 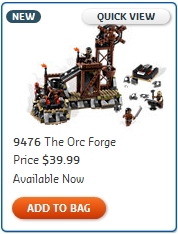 The LEGO Lord of the Rings sets are also available on Amazon, however listings have been getting out of stock very quickly. Make sure you look at listings that are directly from Amazon.com to receive the best prices and free shipping. Below are some of the listings:

These are exciting times for LEGO Lord of the Rings fans! What do you think? If you are getting any of the sets and would like to share your thoughts, opinions and feedback, feel free to post in the comments. 😉

You may also like to head over to the LEGO Lord of the Rings section for more news, pictures, videos and discussions, or just choose below: