A LEGO story – behind the scenes… 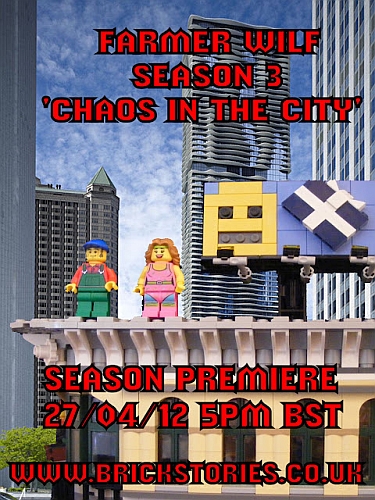 There are many ways to enjoy the LEGO hobby; collecting, building, customizing, drawing, brickfilming, and story writing are just some of the ways creative LEGO fans express themselves.

Today I would like to introduce you to a LEGO blog with an interesting project: publishing LEGO stories that run just like a TV-show or soap-opera. The website is called BrickStories.co.uk and is run by Erik from the United Kingdom. Erik develops the story-line, builds small LEGO vignettes for each scene, and publishes them on his website. Erik says the following about the development of his LEGO stories:

Last year I rekindled my love of LEGO and decided to start creating LEGO stories featuring two main characters; farmer Wilf Doherty and Emily Conte.  The first season ran over three weeks and was published on my personal Facebook page and at the Eurobricks Forum.  After season one I decided to take a break for a while but people really seemed to like my LEGO story so I began working on a second season which ran over a full month. The third season began on April 27th and will see Farmer Wilf struggling to adapt to life in the city after moving in with Emily due to the farmhouse fire in season two. 🙁

Erik’s LEGO story with Wilf’s adventures is creative and entertaining with a good dosage of funny British humor. And the nicely built and well photographed LEGO vignettes bring the story to life. Below are a few pictures from the LEGO story, and also links to the full episodes: 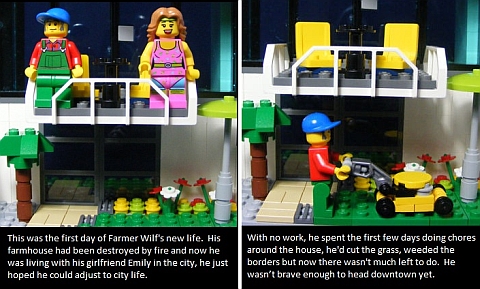 Erik is also working on developing another LEGO story. Here is what he says about the progress so far:

For a couple of weeks now I’ve been working on a project that will see a second LEGO story series launch. I wanted it to be different from the Farmer Wilf series and so have been thrashing out ideas until I had something that I thought would be workable and that people would enjoy.  The story has now been written and so today I’d like to formally announce that my second LEGO story titled ‘The Bureau’” will appear in June 2012. Much like any TV show, the first season will be a pilot where I can gauge reaction to the series to see whether people like it and if it should continue.
Here is a little bit more about “The Bureau”: The Bureau is a department of highly trained agents stationed in the cities’ Police Precincts.  All these agents are trained in the use of special weapons and tactics and each one of them is a one man war on terror.  Their remit is to deal with crime too dangerous for normal police officers. We’ll follow these agents  as they battle crime and protect the public, making the streets safer for civilians like you and I.
“The Bureau – Going Bananas” is the first in what is hoped will be a long running series of LEGO stories. It is hoped that “The Bureau” will be ready for its season premiere sometime in June and after the Season 3 finale of “Farmer Wilf – Chaos in the City”, so stay tuned…

And how about you? Have you ever written a LEGO story before? Did you just write it, or also built it out of LEGO bricks? Are there any other LEGO stories or vignettes that you have enjoyed from other LEGO fans? Please share in the comment section below! 😉

You may also want to head over to the Featured LEGO Creations section: