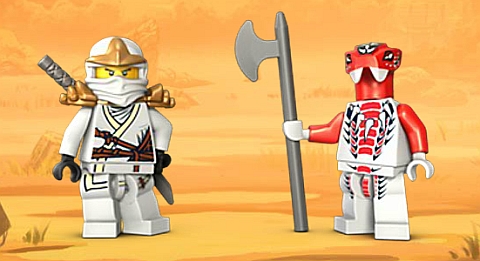 Finally, the part of the Ninjago Spinjitzu battle that supports most of the fight – the weapons! So let’s talk about them in detail. 😛

As in many fights, there are two types of weapons; offensive and defensive. Of course, we all know that the best defense is a good offense, but having lost multiple times that way, I just might have to change my tactics! So we’ll start with the main defensive weapon: a chain. The most basic chain weapon (and in my opinion the best) is the “half-nunchucks” – a normal nunchuck with one T-piece missing.

The nice thing about the half-nunchucks is (yeah, I know, it isn’t really a fifty-fifty split) that it isn’t too heavy like some of its variations. And although you’ll rarely win against even a tolerably good weapon, you’ll almost never loose. You will have to trust almost entirely in your Spinjitzu card-deck to win, but that might not be a bad idea! 😉

Chains are especially good when your opponent has added LEGO bricks to their spinner – unless they’ve added Whip Attack. Especially if they turn the whips up. My brother once told me that he would spin hard if I put the whips up. I tried that, and both he and his chain went flying. 😀 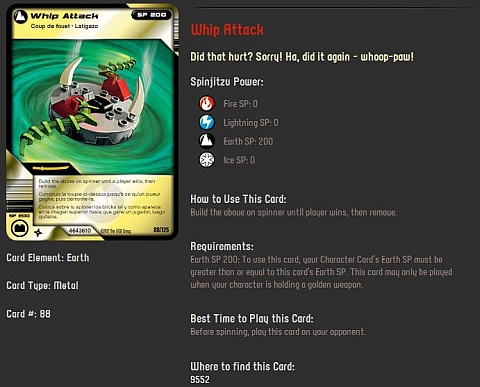 Virtually all other Spinjitzu weapons are offensive weapons. Naturally, you can use these in a slightly defensive way, but since you are supposed to stick your weapon out at least enough to nick your opponent or their weapon, it’s a lot tougher. 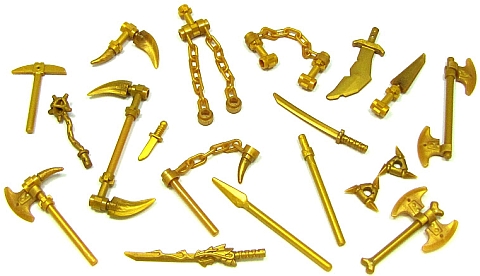 Despite the brute force involved, there is a technique to positioning your weapons; you are not trying (or perhaps I should say you should not be trying?) to hit your opponent, but rather their weapon. That way you can get enough leverage to knock them out of their spinner, especially if they are hitting your character.

If, on the other hand, you hit the character (unless their character is on one leg – and sometimes even if your character is), you will likely find that you are the one that ends up going flying; they just stick to their spinner too well for that kind of attack.

If your opponent is using a chain, you can’t just force a chain around them (which is what makes it such a good weapon); you have to catch it. A scythe or a scythe-variant are almost the only weapons capable of doing this. But even after you catch a chain, you still have a tough fight to prove who sticks to their spinner better.

Speaking of sticking to your spinner, I’ve found that the newer the character/spinner combination is, the better they will end up sticking. And speaking of a scythe, it may be as well to mention that it is a very unpredictable weapon. If you hold it too far out, you’ll probably go half-way across the table – if not the room! But with a little practice, you can probably start doing some serious execution – and then again, not necessarily! 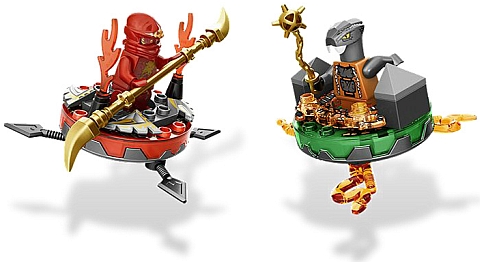 As may be expected, long weapons are not that good, and this includes most swords that are longer than a dagger (unless they are long enough that you can legitimately turn them in the opposite direction so that they are going across your character and then hitting your opponent).

The Dragon Sword of Fire is, like the scythe, an unpredictable weapon, but useful. And since you get three weapons (according to the official guide only one golden weapon, but if Sensei Wu can break the rules, why can’t you – even if he is the son of the first Spinjitzu Master), it’s probably a good idea to use one chain weapon, at least one of the most trusty hard weapons, and if you’re really adventurous, an unpredictable weapon.

Personally, I use a Golden Fang-Blade, along with an NRG Cole type scythe, which is my own invention (pajama style – that’s what my brother said it looks like with the black), and of course a chain. Previously, I’ve used a Staff of the Dragons (after all, “in the hands of a Spinjitzu Master, it’s an unstoppable force”), a chainsaw (which never did quite live up to its name), a normal Scythe, and the Dragon Sword of Fire.

It’s really quite fun to practice spinning with some crazy weapons (not during the Dragon Master of the Month Tournament, of course); sometimes you’d be surprised at what you can get to spin! 🙄

You might also want to check out the official LEGO Ninjago Weapons Dictionary, which has a lot of fun facts about the weapons. For example, did you know that the spear is also know by the names of “Mr. Point”, “The Sharp One”, and “Owwww”! Or that the Double-Boned Skele-Scythe is “Made from the broken bones of fallen Skullkins”? “That’s why no Skullkin likes this deadly weapon. But none dare tell Lord Garmadon this, because no one wants to be his next Double-Boned Skele-Scythe.”

And how about you? Do you have a favorite Spinjitzu weapon? What is the winning combination you have found? Or is that a myth? Feel free to post any comments and questions below! You may also like to watch the 2012 Ninjago – Season 3 Trailer, head over to the LEGO Ninjago section for more news and discussion, or check out some of my previous posts:

Next post: Let there be light! Light up your LEGO world!