Today I would like to introduce you to one of my favorite LEGO story-tellers, Bart De Dobbelaer. Telling stories through LEGO requires story-telling, LEGO building and photography skills all at once. Bart has them all.

Below I will share with you one of Bart’s LEGO stories titled “H.E.X.”. H.E.X. is set in a futuristic station/lab/research-center, following Laura through some unusual and unsettling discoveries. Please note that normally Bart shares one segment of a story at a time (sometimes with a week or so in between), building up mystery and suspense.  H.E.X. is a story concluded already, so you have the benefit of seeing all of the segments at once – although you miss out on the suspense those of us who were following it from the beginning experienced between the episodes.

One of the reasons I really like Bart’s LEGO stories is the gorgeous LEGO dioramas he builds for each of the segments. His use of color, light, and mastery of creating texture with the most unusual LEGO parts is unmatched. And now the story… enjoy! 😛

Meet Lips. Trapped inside some weird world. Will she survive? Or will they all die a most gruesome death? 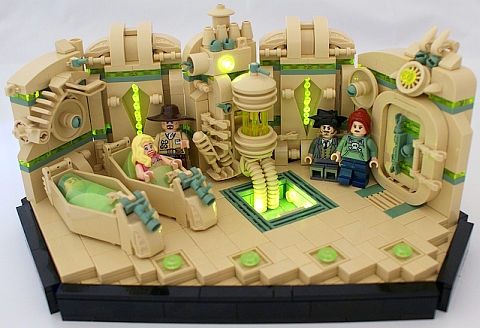 “Great. More people. Just what we needed. Man, I really hate this place! At least Punk Suit is with me on that one. Ranger Rick still thinks he can handle the situation. He is so wrong! We are all going to die a gruesome death in this place. And if Diva doesn’t stop screaming right now, she will be the first one!” 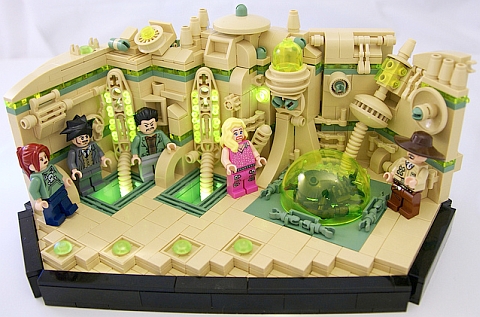 “Yep, we’re all going to die here. That’s for sure. We found a bubble with some strange creature inside. Ranger Rick insisted on having a closer look. The thing stirred and watched us with its giant eye. Diva started screaming. Again. I really hope she dies first.” 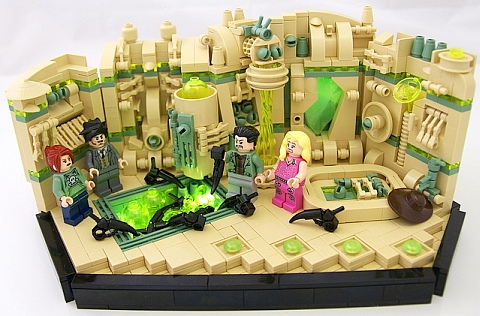 “Eeewww! We found a puddle with some kind of eggs in them. Larvae were crawling out and slithering in all directions. I was too grossed out to even notice Ranger Rick was missing. It was Punk Suit who pointed out his hat on the floor. Dang! Now we have to go looking for him!” 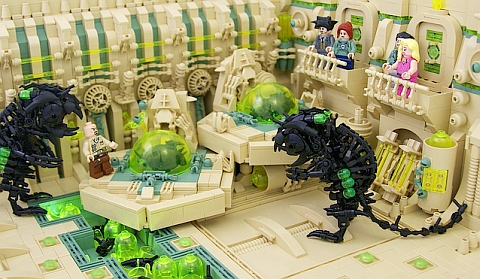 “We crawled through the slimy hole in the wall and came upon an unbelievable scene. Ranger Rick was backing away from a huge creature. Just to get his head bit off by another one right behind him. Ouch! Punk Suit, Wong and myself quickly decided to disappear before Diva’s screaming attracted their attention.” 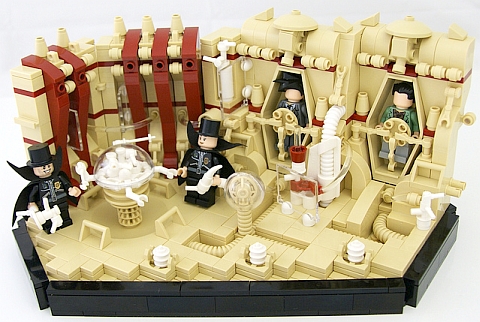 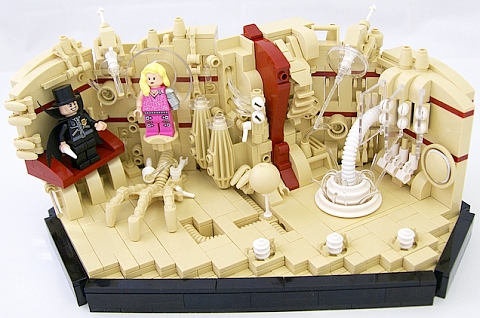 Report 2-7301-6: “The Dual Interfaced View Android is nearly completed. Just one arm and she will be ready for deployment in H.E.X. On second thought it is probably better to insert her together with some humans not to arouse any suspicion. I just got the perfect group. Note: schedule a full mood test. We cannot have her laughing and giggling now, can we?” Dr. John 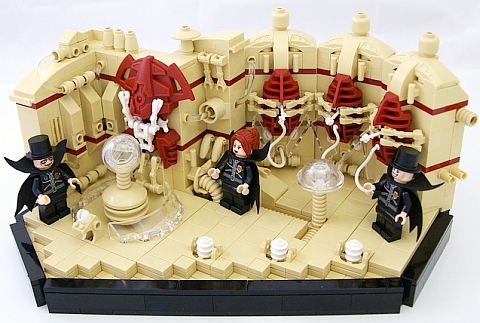 Report 1-9804-5: “H.E.X. is in full progress. Everything is proceeding as planned. Time to insert another variable. Agent Laura is ready for deployment in module 4. Dr. Theo insisted on keeping D.I.V.A. unknown to her. That should make for some interesting interaction later on.” Dr. John 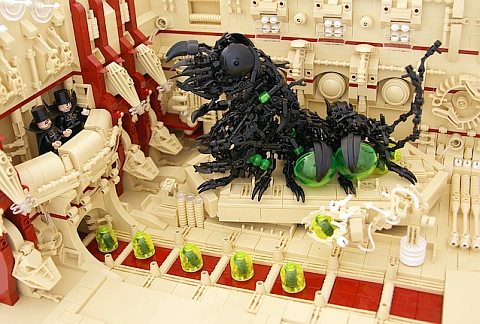 Report 9-6318-2: “Dr. Theo and myself went to inspect the queen. At the current rate that she is laying eggs, we will be able to populate H.E.X. modules 5 and 6 earlier then anticipated. Theo will contact headquarters and request a faster delivery for the next shipment of subjects”. Dr. John 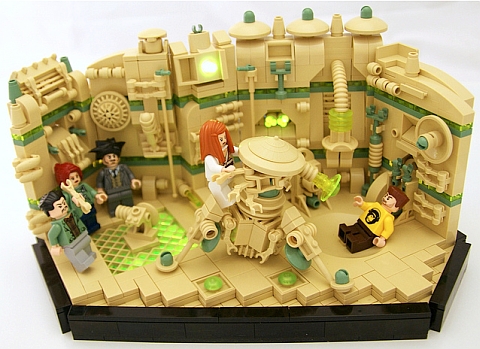 “We stumbled upon a drone attacking some new people. Sarge was crawling away from the bot. Real tough of him! Wasn’t he ex-military? I could have stopped the drone with the control panel but that would have blown my cover. And besides it was more fun to see Mr. Wong and Flower Power trying to shut down the thing. Kind of strange for it to be attacking them. What is Theo up to?” 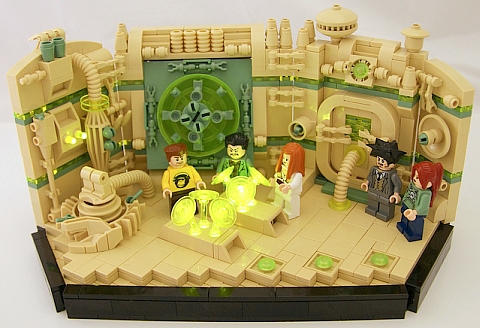 “Flower Power immediately took the lead. She really is a natural born leader. John was right about her. We went to the next room and came upon an active generator. The others were only interested in its pretty lights. However I had to wonder why it was active at all. Did this mean… ?” 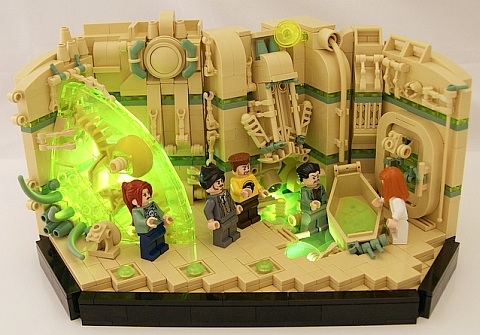 “Damn! It is as I feared. The burrowers are loose. Now we’re really doomed. This was never part of the plan. Unless Theo had something to do with their escape? If so, he’s an even bigger jerk than I expected. Well, I’m not gonna wait here to find out. I’m leaving. Right now!” 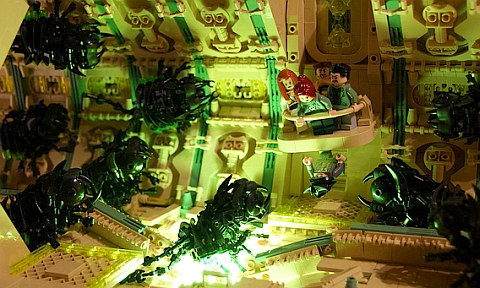 “I took the others through the maintenance tunnels to the transport rail.
They gave me some strange looks but did not ask any questions. I knew it was false hope to think the transit would still be in place. However I did not expect the burrowers to have breached the outer hull.” 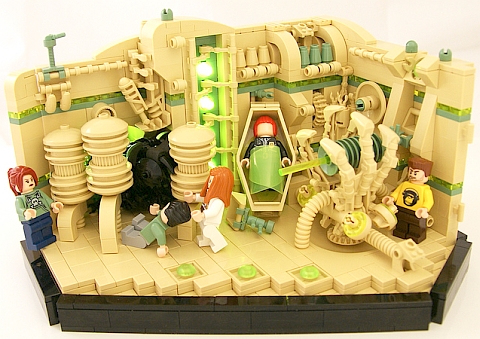 “Punk Suit fell and we … we left him! Instinct took over and we ran. I keep telling myself we could not have saved him. But I find it hard to believe. We managed to escape by crawling through a hole in the wall. The burrowers could not follow but it is just a matter of time. They’ll get through eventually and with no way out … we’re trapped.” 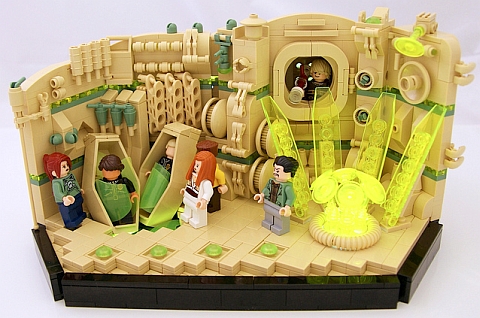 “I’ve always suspected us of experimenting on our own agents. John must have known but he never told me. Why? Am I an experiment too? I thought it would leave me cold but seeing them up close creeped me out. Flower Power noticed and was about to ask me. When suddenly we heard a thud. And the world went dark …”

I don’t want to make this post too long, so find out what happens next by going over to Bart’s Flickr gallery: LEGO Story H.E.X. by Bart De Dobbelaer

And if you like, you can share your thoughts and comments on the story below. How did you like it? And what about the LEGO dioramas? Did you find some neat part-usage that you would like to try out yourself? 😉

You may also like to check out the following posts: