by Thita (admin) on September 17, 2012
in Building Techniques

There are many ways to connect LEGO bricks – there is the standard studs-on-top, one LEGO brick on top the other way of building, then there are ways to build sideways, upside down, and even make unusual connections between LEGO parts. But how about going completely unconventional and build a LEGO creation with no connections at all? Sounds like a paradox isn’t it? Building a connectionless creation with building-blocks that are meant to connect. Well, check this out!  😮

To prove that it is possible to go completely unconventional and think outside the box Sean and Steph Mayo (a.k.a. Siercon & Coral) created this beautiful LEGO creation called Avalon. And yes, it is built without any connections; basically bricks and plates are just piled on top of each other. 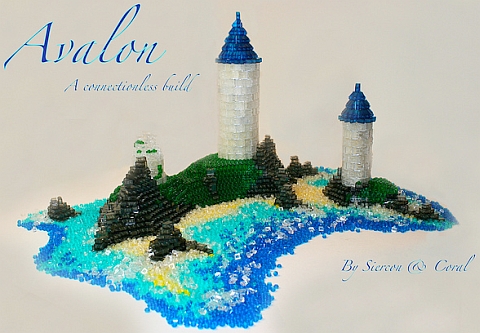 This is what Sean and Steph says about their creation: “Avalon was build for the third round of a LEGO competition where the topic was ‘outside the box’. We were fiddling with a new technique and thought, ‘What would be more outside the box, than to create an entire LEGO display without any connections at all?’ This was the result. This, (we think) is a new LEGO building-technique which is a mixture of a card-house and Jenga… but with LEGO! Very stressful and terrifying to build, as the slightest slip or lean meant catastrophe.”

Once it was time to take LEGO Avalon apart, it only took a sweep of the hand; like those beautiful sand-mandalas that Buddhist monks work on for many weeks, then destroy at the end – symbolizing the non-permanent nature of the Universe. Quite amazing to see – especially in slow motion:

So what do you think? How do you like Avalon? Did you ever try using LEGO parts in unusual and unconventional ways? Did you discover some interesting new techniques? Share your thoughts below. 😉

You may also like to check out these other works by Sean and Steph that we featured recently. It looks like they are really on a roll with amazing ideas!