Below I will show you the upcoming 2013 LEGO Friends sets, but I also wanted to give you a little bit of update on LEGO Friends. Remember all the controversy, doubt and even outrage about the new LEGO theme for girls? Yeah, it seems like a long time ago. LEGO Friends in fact blew away the naysayers with their sweet smiles and pretty colors. Go girls! 🙂

LEGO recently published a press-release with their 2012 half-year results. Even the title is telling: “Successful launch of LEGO Friends. New products targeting girls have sold twice as well as expected, and contribute to an exceptional interim report for the LEGO Group.” You can read the whole press-release here, but here is the section related to LEGO Friends:

The year’s big launch – LEGO Friends, a product line targeted for girls – has done amazingly well since its launch in January. The Group sold twice as many LEGO Friends sets as expected during the first six months of the year. It has therefore increased production to meet the demand for LEGO Friends in the important Christmas period. Reflecting on the launch of LEGO Friends, Jørgen Vig Knudstorp says: “LEGO Friends is a result of four years’ development, and it has been amazing to experience the enthusiastic welcome that consumers have given the new range. Sales have been quite astonishing. With LEGO Friends we’ve managed to make creative construction toys more relevant for girls – and we look forward to developing the product line further in the years ahead.”

And now let’s see what to expect in 2013 for LEGO Friends. There are 8 new LEGO Friends sets scheduled to be released in January. There is no really large set in this wave, but more small to medium affordable sets with one or two Friends enjoying various hobbies. As usual each set comes with lots of lovely accessories. There is also a new line of small LEGO Friends Collectible packets that include even more accessories, but no Friend minifigures. Basically this is a great way to get extra parts, cute animals, etc.

➡ #41000 LEGO Friends Watercrafting Fun – small set with a jet-ski and a girl whom I believe is Andrea. 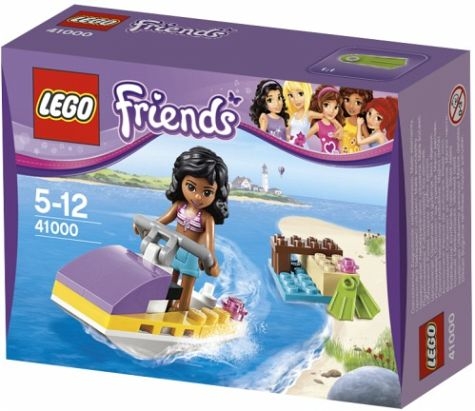 ➡ #41001 LEGO Friends Mia’s Magic Tricks – small set with Mia dressed as a magician and a little magic stage. I believe the stars on the stage are new parts and will be very useful for making starry skies! 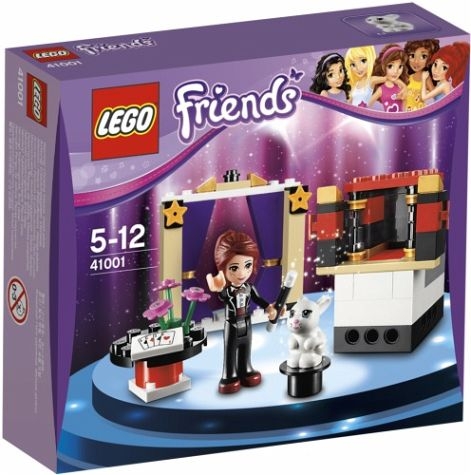 ➡ #41002 LEGO Friends Emma’s Karate Class – small set with Emma in a karate uniform breaking boards. Girl power! I’m not sure what the little tree is for… maybe a bonsai? Also, adding the Ninjago kendo helmet is interesting to say the least – although it could fit on Emma’s head if her hair-piece is removed, she would look absolutely terrible. It is really not a helmet meant for the Friends line. 😕 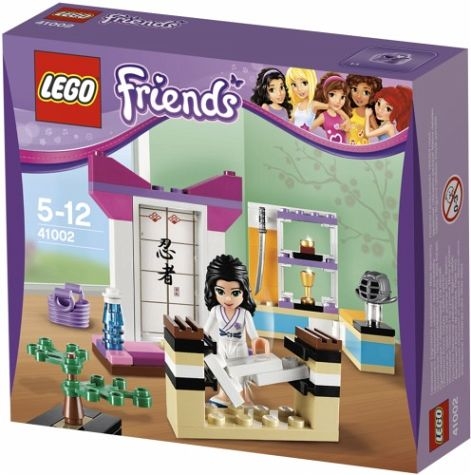 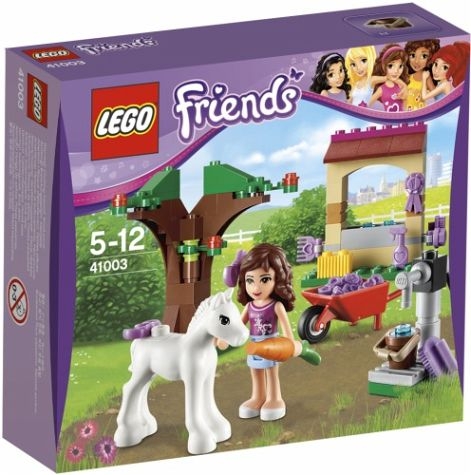 ➡ #41004 LEGO Friends Rehearsal Stage – a bit larger set with Stephanie doing dance-rehearsals. There is also a small make-up table, and notice the new guitar at the back! 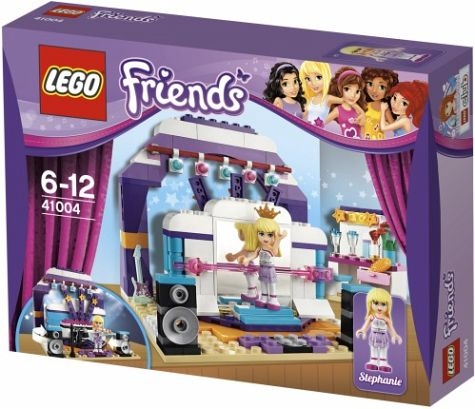 ➡ #41007 LEGO Friends Heartlake Pet Salon – one of the bit larger sets with Emma taking her puppy to the pet salon. The other minifigure is Joanna who works at the pet salon. She comes with a new hair-piece! Yay! 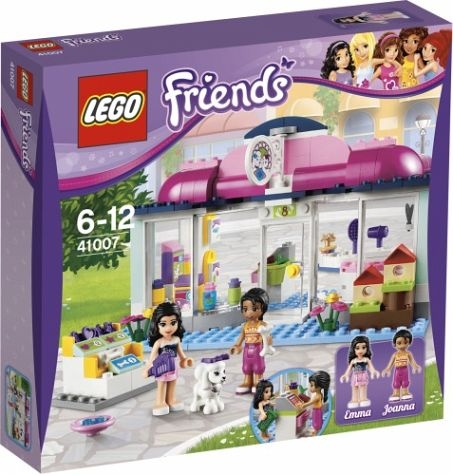 ➡ #41008 LEGO Friends Heartlake City Pool – this is the largest of the January LEGO Friends sets. It includes a public pool with a slide, a Jacuzzi, basketball hoop, a shower, and lots of other fun things for Andrea and Isabella (the two minifigs included). Oh, and it appears there is a new ice-cream cone! 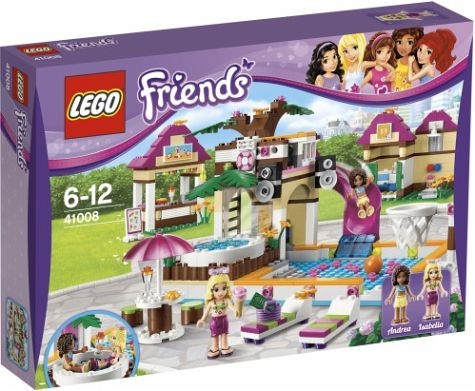 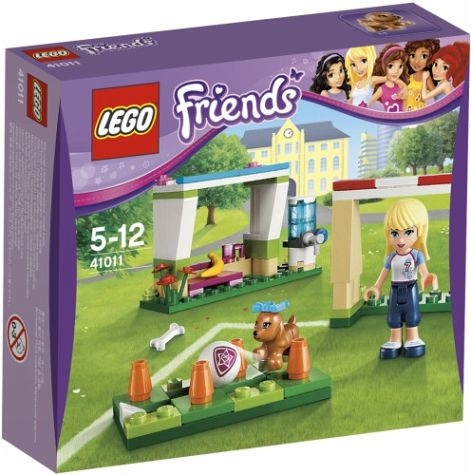 ➡ #41017 LEGO Friends Squirrels Tree House – small set with a squirrel and a cute tree-house. (The squirrels in my back-yard are getting jealous! They don’t have houses like this!)

➡ #41018 LEGO Friends Cat’s Playground – cute little kitty and giant fish at a playground. I wonder how this is going to turn out… 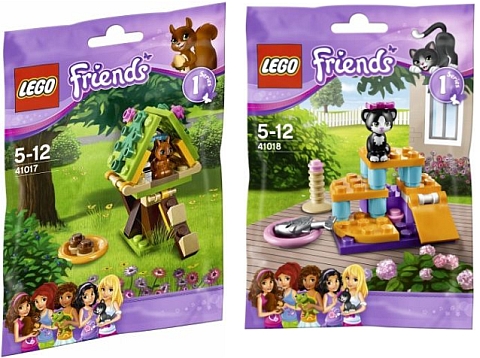 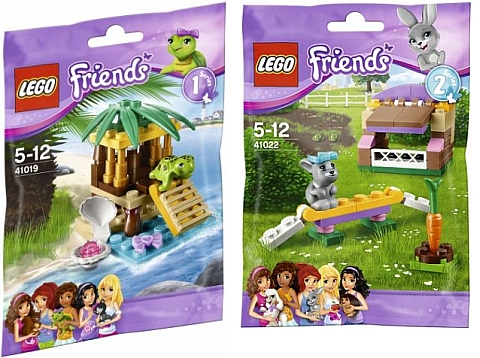 If you would like to check out the currently available LEGO Friends sets, you can visit the Online LEGO Shop. Both the first and second wave of LEGO Friends sets are still available (23 sets in total), and with free shipping and double VIP points this month, it is the perfect time to pick them up for the holidays for your kiddies or yourself! 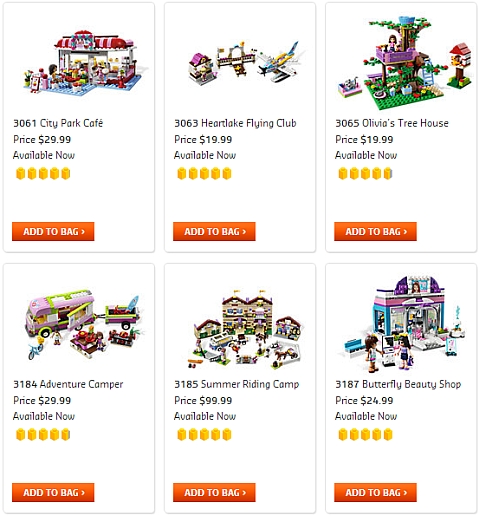 What do you think? How do you like the 2013 LEGO Friends sets? Are you planning to get any of them? Which one is your favorite? Share your thoughts in the comment section below! 😉

You may also like to visit the LEGO Friends section for more news, reviews and discussions, or select from the following related posts: