LEGO Ninjago has a huge fan-base, especially amongst pre-teens and young teens; an age-group where role-play is still serious business. After all who doesn’t want to be an awesome ninja like Kai, Jay, Cole and Zane? Or even the legendary Green Ninja? I know I do, and I’m a grown-up! 😛

Having Halloween in mind I got curious to see if there are any LEGO Ninjago costumes out there. I found quite a bit of generic ninja costumes, but what really caught my eyes are these LEGO Ninjago hoodies available on eBay. Although these can certainly be used as Ninjago costumes for Halloween, I have read the reviews and these are in fact cozy, high quality hoodies suitable for everyday use. 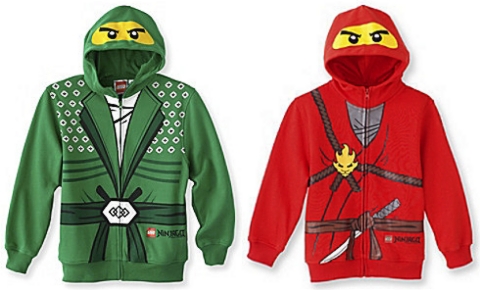 Aren’t they great? I love how the Ninjago face is printed on the hood and the details are just perfect! The hoodie is available with Lloyd (green ninja), Kai (red ninja), Jay (blue ninja) and Cole (black ninja) design. I didn’t see Zane. The hoodies are available in several sizes. It’s probably too late to get them for Halloween, but they would still make a great Christmas present for Ninjago fans. 😉

Below is a link to all the Ninjago hoodies on eBay, if you want to check them out. Some of them are listen auction-style and some with a fixed price, so I suggest you compare: LEGO NINJAGO Hoodies on eBay

I have also found lots of Ninjago clothing on Amazon. These are mostly T-shirts with various Ninjago prints, maybe not as cool as the hoodies, but if you are looking for gift items for young ninja in training, this is another place you can look: LEGO NINJAGO Clothing on Amazon

And if you just want Ninjago costumes there are plenty of those as well. I would check eBay for these: LEGO NINJAGO Costumes on eBay

So are you planning to dress up as a ninja for Halloween? And how do you like the other Ninjago clothing? What do you think of the hoodies? Have you seen other cool Ninjago outfits? Share your thoughts below! 😀