There are two LEGO project on LEGO CUUSOO that recently achieved the required 10,000 votes from the public to be reviewed by LEGO for possible production. This is a huge milestone for both LEGO projects, so let’s congratulate them and talk about them a bit. 😉

➡ LEGO CUUSOO SPACE TROOPERS BY NICK ROYER – this LEGO project has been steadily gaining support for quite some time now. Because Space is a perennial theme at LEGO, I could very well see Space Troopers as the next official LEGO Space theme. I will be very curious to see where LEGO will go with this project, as if approved, this will be the first fan-created full LEGO theme. (All previous LEGO sets that came out of CUUSOO were stand-alone single sets.) It would be a major achievement by the LEGO community! 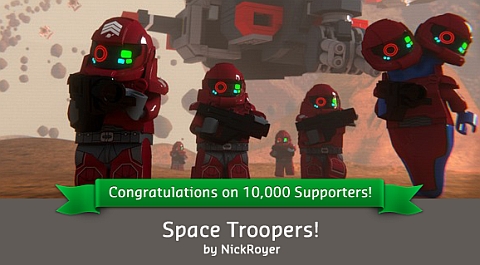 There is a lot going for the LEGO CUUSOO Space Troopers. The project includes everything a LEGO fan could ask for from a Space theme; good-guys, bad-guys, space-vehicles, all ready for some major space conflict – also referred to as playability. Check out the video promo below! 😀

Nick Royer, the creator of the LEGO Space Troopers project envisions different terrains for space-exploration, armored vehicles, drop-ships, and battle-packs of Space Troopers and Aliens (he calls them Ugokins – cool green and orange four-legged guys and nefarious enemies of the Space Troopers). He says: “Taking place in the distant future, long after initial human-alien contact, the Space Troopers theme follows our intrepid band of Space Troopers across the Galaxy as they fight evil aliens and explore treacherous terrains.” He calls the project a “theme being in essence an updated Neo-Classic-Space mixed with the vigorous ethos of Alien Conquest”. Nice way to put it…

LEGO’s official statement on the project after it achieved 10,000 votes was as follows: “Space Troopers is a fun concept, well thought out, and with broad-based support. You’ve done a great job of presenting it concisely with a lot of possibilities. Further it is a great example of a high quality concept refined over time into something that looks like it has real potential as a LEGO product. Congratulations on achieving 10,000 supporters. We now officially advance this project to the Review phase.” You can check out the details on this project here: LEGO CUUSOO Space Troopers by Nick Royer

➡ LEGO CUUSOO EXO-SUIT BY PETER REID – this is another LEGO Space themed project with a broad base of fan-support. This is a single-model project, only including the Exo-Suit and some accessories. The design itself is deliciously greebled to the hilt, which should provide an interesting building experience. The Exo-Suit model could fit well into any LEGO Space or not-so-distant military themed LEGO creations.

The creator of the project Peter Reid requested that if his model makes it to the development stage LEGO designer Mark Stafford handles the final design of the Exo-Suit. I hope that will be the case as Mark is well known for his excellent vehicle designs in LEGO Exo-Force, Agents, Power Miners, Space Police, Alien Conquest and many other sets. 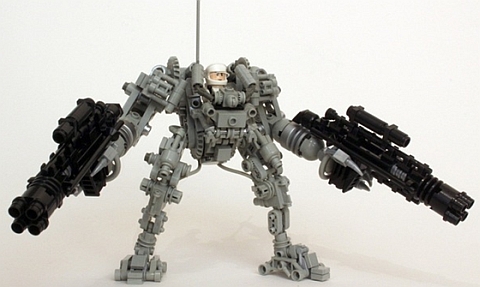 LEGO’s official statement on the project after it achieved 10,000 votes was as follows: “A beautiful model and well-deserved success! The detail makes it come alive and it’s easy to imagine it working in a shuttle-bay, a team of them constructing a space-station, or engaged in an epic mecha battle. Congratulations on achieving 10,000 supporters. We now officially advance this project to the Review phase.” You can check out the details on this CUUSOO project here: LEGO CUUSOO Exo-Suit by Peter Reid 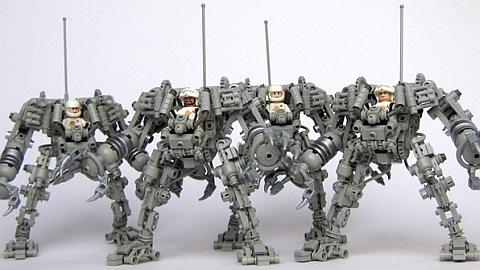 Both of these LEGO CUUSOO projects qualify for the quarterly review period beginning in March, and other qualifying project may also join them in the meantime. From the previous review-phase it seems that LEGO only chooses one project for production from any particular review period, so we just have to wait and see to find out which one it will be. 🙄

What do you think? Which of the two projects you predict will be chosen by LEGO? And which one would you like to see make it into an official LEGO product? Share your thoughts in the comment section below. 🙂