LEGO has been really putting a lot of effort into making the LEGO Legends of Chima theme a huge hit; using a lot of the same ideas of Ninjago, but with a unique flavor. Like Ninjago, Chima (pronounced chee-mah) will have its own TV show, and also comes with its own game; similar to the Ninjago spinners, but in some ways very different. Here I would like to show you how to play the LEGO Legends of Chima Speedorz game. 🙂

To be able to play the Speedorz game, you’ll need two Speedor vehicles; one for yourself, and one for your opponent. You’ll also need a character, though, unlike in Ninjago, the characters won’t benefit or harm each other in any way during the game – they are just figures you stick on the Speedor. (To be clear on the terms used here; the vehicle is called a Speedor, the game is Speedorz, and the crystals and balls used in the game are called Chi.) To stick your Legends of Chima character on the Speedor you’ll need to take the top off of the Speedor off, sit the character down, and then replace the top. It’s an arrangement that insures that your character won’t fly off the Speedor half-way through the game! 🙄 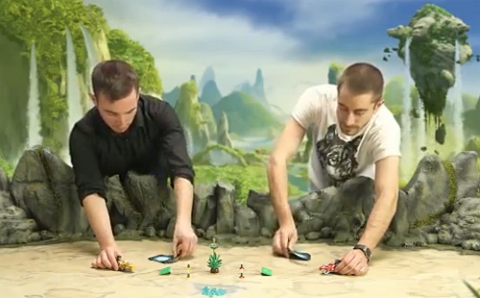 You’ll also need five Speedorz cards, though if you wanted to, you could probably play the game without cards, or even just use cards and no Speedor… but we’ll get to that!  To start the game, arrange whatever challenge you have from the Speedorz sets you got (Ring of Fire, Jungle Gates, Nest Jump, etc.) and get ready with your Speedor. 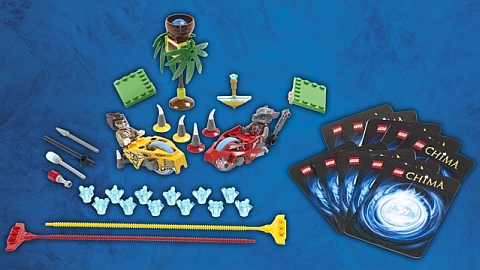 Of course you’ll need an opponent too, and that can get a bit complicated since whether or not you go at the same time or one after another depends on the challenge. In general, when there’s a Chi ball involved (as in the Chi Waterfall, for example), it seems you’re supposed to go at the same time. If not (as in Ring of Fire), just take turns. If you are playing a challenge that does not have a Chi ball, whoever goes through (keep going until you have a winner) wins.  But if there is a Chi ball included in the challenge, not only you have to go through the obstacle and release the Chi, you also have to be the first to grab it. Then, you move on to the next round. 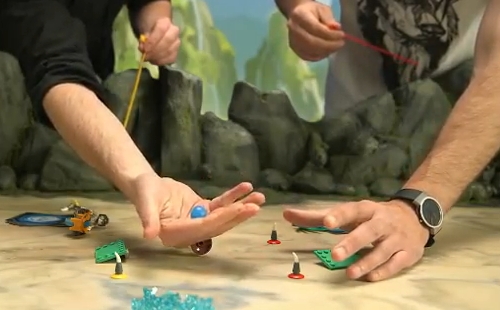 Remember those Speedorz cards we talked about before? Now is the time to use them! If you haven’t shuffled them before be sure to do so now, and draw the top one. Whoever succeeded in completing the challenge now has a slight advantage; before showing the cards to each other, that player gets to pick which power they will compare. In other words, if you look at any card you’ll see that there are four different powers on the bottom that you can choose from; Instinct, Courage, Strength and Speed. 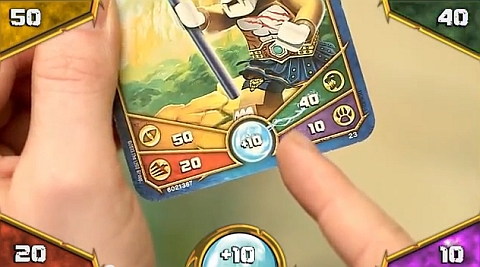 The original winner now gets to pick which of the four powers will face off to determine who gets the two Chi crystals up for grabs at the end of the round.  But before you reveal your cards, you have an option to pay one Chi crystal and add the amount specified in the blue circle to the power either you or your opponent have picked. Of course, you have to already have a crystal to do this! Once that is done, compare the cards; whoever has the highest score is the winner of that round, and receives two Chi crystals.  Whoever gets 6 crystals first wins! 😛 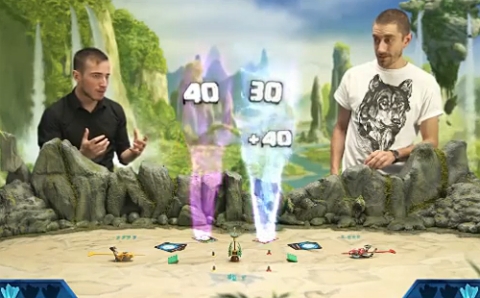 The nice thing about the Speedorz game is that it’s more fast-paced than Ninjago; instead of watching a spinner twirl around, you get to see your Speedor go flying across the room. But there’s a sort of trade off involved with that; the cards aren’t actually incorporated into the game but almost constitute a game of their own. As I hinted at earlier, it would be pretty easy to give the two crystals to whoever won the challenge, or to skip the challenge and pick a power at random before drawing your cards. The great thing about the Ninjago spinners is that the cards are there to give you an advantage in spinning, not like in Speedorz, where it seems to work the other way around and actually diminish your advantage! 🙁

Here is a video by the BrickShow guys on how to play the Speedorz game and also some of the variations you can use for playing. (You can also find other video tutorials on the LEGO Legends of Chima website.)

If you would like to try out the LEGO Legends of Chima Speedorz game you can check out the currently available Speedorz sets at your local department and toy stores or the Online LEGO Shop: 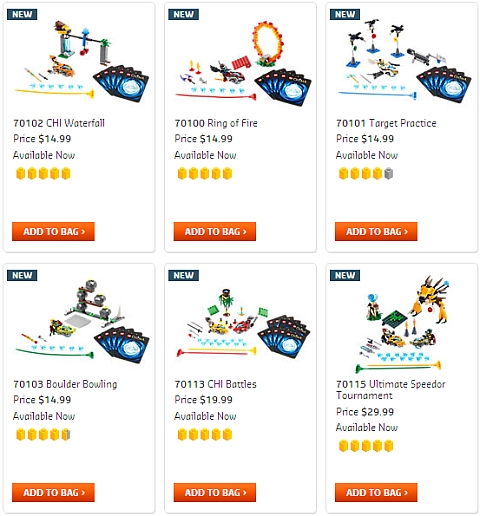 What do you think? Are you interested in the LEGO Legends of Chima Speedorz game? Have you played it already? How do you think it compares to the Ninjago game? Is it easy for you to get through the obstacles or do you find it pretty hard? Feel free to share your thoughts and discuss in the comment section below! 😉

You might also like to check out the LEGO Legends of Chima section for more news, reviews and discussions, or select from the posts below: