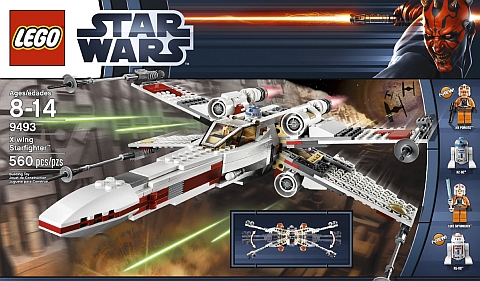 First of all, here is the official description: Lead the Rebels into intergalactic battle with the X-Wing Starfighter! Featuring wings that fold into attack mode, proton torpedoes, retractable landing gear and opening cockpit, this most iconic vehicle of the Star Wars universe returns to turn the tide in the battle against the evil Empire!

I would like to add that this is a 560 piece-count set, with a regular price of $59.99, which is not bad at all for one of the most recognizable Star Wars starfighters. (And it is right now 25% off sale on Amazon.com, but I will tell you about that later.) 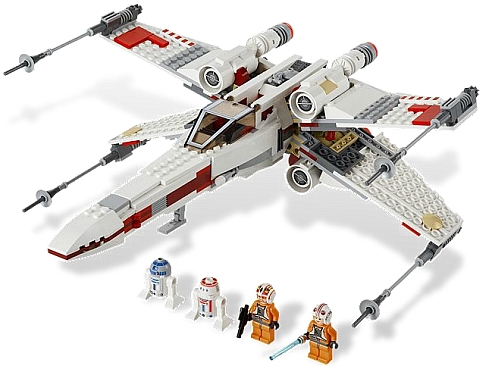 Besides being solidly built and swoosh-able like the previous versions, there are some features that did improve on the #9493 LEGO X-wing; my favorite being the gear at the back to open up the wings for attack-mode – it is a lot easier to operate then on previous versions. 😀

There are four minifigures included with the LEGO Star Wars X-wing Starfighter. Luke Skywalker has a brand new suit (with front and back printing and helmet – both very detailed. Jek Porkins is a first-time release and unique to this set. His torso printing is the same as Luke’s, but his helmet has different printing. R2-D2 is standard, but the other droid R5-D8 is a first-time release, and also unique to this set. (Photo by FBTB.net)

Overall this is a great LEGO Star Wars set, especially for fans of the original Star Wars Trilogy. I would rate it five out of five stars, and the minifigures are also awesome (two of them being unique to this set.) And if you want to build up a battle-scene there are three sets that would go well with the LEGO X-Wing Starfighter; the #7965 LEGO Star Wars Millennium Falcon, the #9492 LEGO Star Wars TIE-fighter, and the #9495 Gold Leader’s Y-wing Starfighter.

The #9493 LEGO Star Wars X-wing Starfighter is available at the Online LEGO Shop, and also currently available on Amazon for 25% off the regular price. So if you wanted to pick one up, or build a whole fleet of X-wings, this is the time! Amazon also offers free shipping for orders over $25 and no tax to most states: BUY LEGO STAR WARS X-WING ON AMAZON

So what do you think? How do you like the LEGO Star Wars X-wing Starfighter? Do you own the set already? What are your thoughts? Feel free to share them in the comment section below! Also, I’m a KFOL (Kid-Fan-of-LEGO) and this is my first post here at theBrickBlogger. I intend to write more reviews in the future so feedback is welcome! 😉