Building LEGO robots – my own creations

First and foremost, let me start by saying that I am by no means a creative or talented MOC-er. If you read my Contributor’s Page, you know that there was a time in my life where I believed MOC-ing (meaning; free-building with LEGO) was heresy. Even now I’m not particularly keen of MOC-ing, but I do create some of my own design from time to time. But wait, let’s take a step back; if you are new to the LEGO hobby you may not be clear on what a MOC or MOC-ing is. When I first heard the word, the first thing I thought of was the English word “mock”. But what does that have to do with LEGO? Not much. For LEGO fans MOC-ing actually means something entirely different. You can check out the LEGO Dictionary for the meaning, or I will give you my own explanation here for your convenience: MOC stands for “My-Own-Creation” – so anything from the ingenious things teens and adults came up with, to the colorful LEGO walls and towers that little kids build can be considered a MOC.

Now that we cleared that up let’s continue with a question. Ask yourself this: “If I would have all the LEGO bricks in the world, what would I build?” Ah yes, the classic question! You might say you’ll make a town, a ship, a 1:1 model of yourself, a display of Les Miserables… Personally, I would be paralyzed by the question; I would have no idea what to build. In fact, having all the LEGO bricks in the world would make me very uncreative. However, if you give me a set number of LEGO elements, I’m sure I can come up with something. Which is why I came up with a challenge for myself: I take a LEGO set (or sets) take it apart, and then build something new from the pieces. And to narrow down the challenge even more, I limit myself to a specific theme I’m particularly interested in; in this case, LEGO robots. So let’s start the showcase of what I have built! 🙂 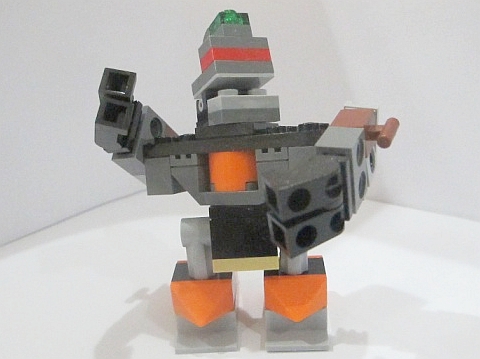 This little LEGO robot is one of my personal favorites. It’s built using the pieces from the #7570 LEGO Prince of Persia Ostrich Race, #8968 LEGO Agents River Heist, and #30017 LEGO City Police Boat. Personally I like the hands; rather imperfectly cliché, but oh well. I tried adding as much poseability to the model as possible. Although it isn’t very clear on the picture, the robot’s legs and arms are hinged, the hips and head turns (thanks to the turntables from the Ostrich Race set), the fingers move, and even the jaw hinges upwards. Yeah, lots of ways to pose this LEGO robot – something I’m very happy with. 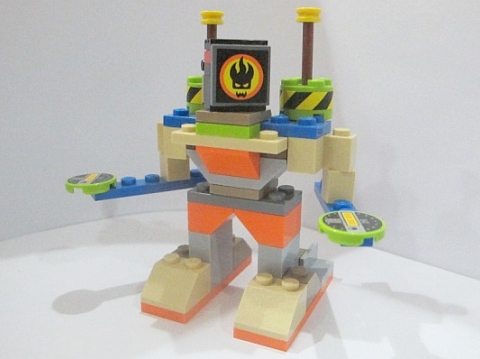 This LEGO robot is built using the pieces from the same LEGO sets as the robot above. I envision this as some kind of an acid-shooting robot. It has less posing possibilities, but the head and hips still hinge using those 2×2 LEGO plates with one stud in the middle. 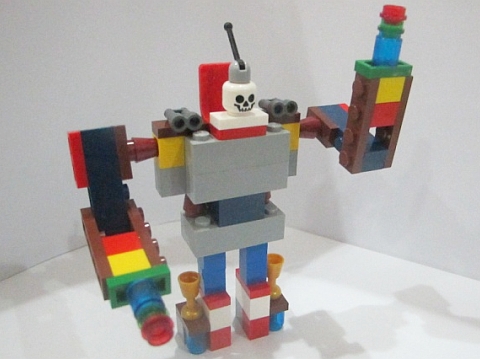 This LEGO robot was built from a very strange combination: the #3836 LEGO Game Magikus and the #4642 LEGO City Fishing Boat. While I admit it’s a strange mix, the end result is pretty neat. However this robot does have the least poseability; only the arms can move, and also the head. 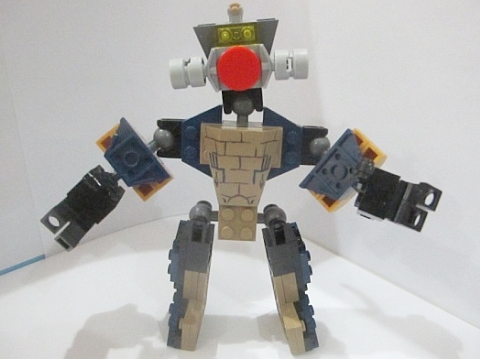 This LEGO robot consists of pieces from the greatest variety of LEGO sets. Mainly elements from the #7325 LEGO Pharaoh’s Quest Cursed Cobra Statue, and few pieces from #7566 LEGO City Farmer, #7955 LEGO Kingdoms Wizard, #30013 LEGO City Police Buggy, and #30080 LEGO Ninjago Ninja Glider. As you can see, I used the Leg-As-Fingers technique again, but this time I think I nailed it. 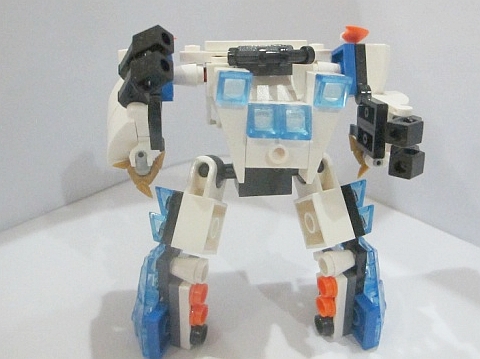 I love this little guy! I created it solely from the pieces of the #2260 LEGO Ninjago Ice Dragon Attack. Surprised? I know I am. I made full use of the quantity of hinges in the set, and the hunchback is pretty neat. I also like how the hinge incorporates with the socket-joint so seamlessly. 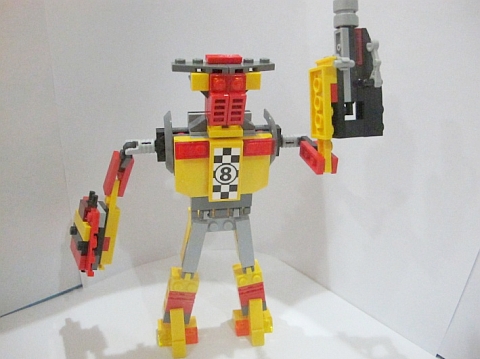 Now, let’s step it up to some of my bigger LEGO robots. This robot was made out of pieces from only the #4643 LEGO City Power Boat Transporter. I did some hardcore SNOT-ing for that head (see LEGO Dictionary), which turned out okay, but sadly doesn’t turn. I am seriously overusing those wheel arches as shoulder-armor since the LEGO Exo-Force theme (particularly the awesome Blazing Falcon!) is still burned so freshly within my mind. The gun-thing turned out good, I think, and the number 8 insignia is okay. But what I’m most proud of in this LEGO robot is the legs. You might argue that the hips are not the best place to incorporate click-hinges – and I got to agree with you – but the legs hinge sideways, with the feet attached to only one stud, so the robot can balance itself. 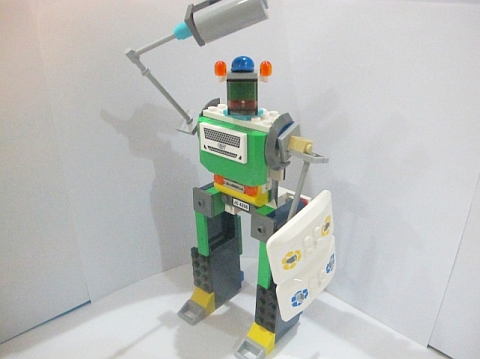 This is the first LEGO robot I made for the challenge, thus still kind of rough. Oh yeah, also because when I was building this my sister took all the click-hinges, significantly limiting me. This one is made of pieces from the #4206 LEGO City Recycling Truck and the #3939 LEGO Friends Mia’s Bedroom sets, which explains the hints of aqua-blue. With the chest, I wanted to get some sort of Transformers feel, so I used the decaled front of the Recycling Truck. Well, I don’t have much else to say… I feel like I kind of messed up with this one. 😐 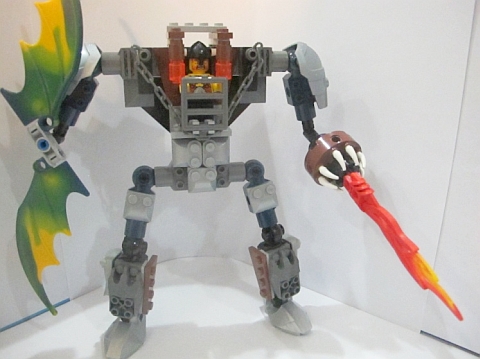 Ok, fine, I cheated; this creation – which is, by the way, made out of only pieces from the #7021 LEGO Viking Catapult vs. the Armored Ofnir Dragon – is not a robot but a mecha. Kind of like the mechs in LEGO Exo-Force. The “cockpit” opens, allowing a Viking warrior to sit inside. And in case you haven’t noticed, I was thinking of the #7700 LEGO Exo-Force Stealth Hunter set when I built this – which explains the double-sided melee weapon and the long-range weapon. I also wanted to add wings, but I think it would have been a bit over-the-top.

And that’s about wraps it up as far as my LEGO robots. Since this is my first post sharing my own MOCs and the very first time I’m posting my MOCs online, please give me feedback and let me know what you thing. Part of the reason I’m sharing these with you is to prove that you can build anything from LEGO… out of any LEGO set. So try challenging yourself by choosing a LEGO set (or sets), decide on a topic, and build something! Feel free to share your results below! 😉

Next post: Best LEGO Lord of the Rings dioramas part 2