Last year I was interviewed for an article by New York Times reporter Jesse McKinley. Jesse – along with his colleague Matt Richtel – was working on a story about the success of LEGO in several non-brick formats. They also wanted to ask a few questions from members of the LEGO community to get some feedback. Besides interviewing me they also contacted Josh Wedin from the Brothers-Brick and Joe Meno from the Brick Journal. 🙂 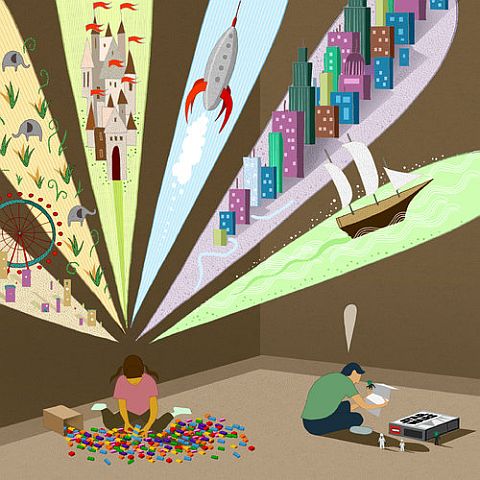 The New York Times article was published in the December 23rd print-issue of the magazine, and it is also available online (see here: Has LEGO Sold Out? ). They never quoted me in the article, but they did include a line each from Josh and Joe. Anyhow, what I thought to share with you today were the questions Jesse asked me for the article. They were quite interesting, and I was curious to see what you think, and how other LEGO fans would have responded. Below are the questions and my responses:

➡ How long have you been a fan of LEGO? When did you get your first LEGO bricks?

If I remember correctly I have gotten my first LEGO set when I was six or seven-years-old. My father is an architect and he frequently used LEGO for his models. And my mom, a mechanical engineer, also very much valued educational and creative toys – so the love of LEGO runs in the family. Like many other LEGO fans I have put aside my LEGO sets when I turned fourteen for other interests and pursuits. However I went back to LEGO again as an adult. This phenomenon is in fact so common, that those LEGO-less late-teen/early-adult years are referred to as the “Dark Ages” within the LEGO fan community.

➡ What specifically (and as well as in a more philosophical way) do you like about LEGO? The creative energy they inspire? Their adaptability? The inventiveness shown by LEGO designers?

I’m artistic by nature, and for me LEGO is a creative medium like paint on canvas, clay, metal or wood. However while I could find a blank canvas quite intimidating with its emptiness, give me a bucket of LEGO and I’m instantly inspired. LEGO bricks give a friendly invitation with their bright colors and given shapes. Even though the elements of structure are pre-defined, they still allow unlimited creativity. It is actually quite fun to take a LEGO element and figure out what can be done with it. If I turn it upside down or sideways what does it look like? What can I do with it to bring out an unusual interpretation? LEGO elements get my creative juices flowing even when I’m stuck or tired. I actually never looked at LEGO as just another children’s toy, even when I was a child. It is definitely a lot more than that. It allows one to be creative, work out problems and solve challenges – or just provide an old-fashioned way to play and relax alone, or with friends and family.

In fact, this is another aspect of LEGO I really like; the social and community connections it can build. There is nothing like interacting with other LEGO fans; working on a project, bouncing off ideas, or even just quietly observing others as they create. This kind of art and connection are humanity at its best; refreshing and soothing to both mind and soul. And families building together – either along with parents, or just amongst siblings – create lasting memories.

➡ Do you play any LEGO video-games, read LEGO books, or watch LEGO-inspired TV shows? Have you ever been to LEGOLAND?

I do not play LEGO video-games. They look quite fun, but I’m on my computer for work so much already – for me looking at a screen for relaxation is not so inviting. But I know LEGO video-games are popular. They are just not for me at this stage of my life. I do read LEGO books though. I just browsed through “The LEGO Adventure Book” by Megan Rothrock the other night. Those are the kind of LEGO books I like the most; sharing building ideas and tips from other LEGO builders and artists. It is interesting to see how other people think and use the same elements. I only watch LEGO TV shows online (and I love them!). I actually don’t own a television – by choice. As far as LEGOLAND, no, I have never been. I feel it is mostly for kids. Of course if there would be an excuse – like borrowing a kid for a day to go with me – I would go at least once. But just for myself, I think I would feel kind of out of place. Although I’m sure I would enjoy the LEGO exhibits and would love browsing the LEGO shop.

➡ Do you feel that the newer LEGO products (like those kits based on Star Wars, Indiana Jones, etc.) are true to the spirit of LEGO? Are they as creatively challenging/inspiring as the older, simpler LEGO brick sets?

I like both the old and new LEGO sets. (One of the wonderful attributes of LEGO is that elements made way back in the ’60s and ’70s are fully compatible with parts made today.) I grew up in the pre-LEGO Star Wars era, and all my brother and I wanted to build were scenes from the Star Wars movies. Kids are creative and will work with what they got, but it doesn’t mean they don’t want better. It’s not like they can’t see the imperfections, they just choose not to get hung up on the limitations and will fill in the gaps with their imagination. (In fact I believe this is one of the main reasons so many adults are into LEGO; they can finally get the LEGO sets they always wanted as a child!)

As you can imagine, I’m extremely thrilled that LEGO got the Star Wars license. Same with the recently acquired Lord of the Rings license. I can’t be happier! As far as the new sets being less creative, I don’t see that. They just provide more interesting building opportunities. I have seldom found a LEGO-designed set I didn’t want to immediately expand and improve on. So creativity is right there. And I have never seen the LEGO community being so productive then these days. The creations by both young and old LEGO fans are just awe-inspiring!

➡ Finally, some people feel that the newer LEGO sets that come with such detailed instructions kills the fun of trying to imagine and create your own inventions. But others feel they help younger LEGO fans get a sense of accomplishment by finishing often elaborate models, and that the sets can, of course,  always be taken apart and the pieces used for different designs. How do you feel about this?

This is an age-old question that regularly pops up and turns into a thoughtful or even heated discussion. My take on it is that people (young and old) use LEGO in different ways. My brother and I were always free-builders. We built a LEGO set once according to instructions, then either took it apart right away to build something else, or if we considered it worthy, we worked on it to make it better. At the same time, our cousin, who was a bit younger then us, was always a collector. He built LEGO sets once – according to the instructions – then proudly displayed them on a shelf, barely ever touching them again. He was into LEGO, but in a different way. And some fans use LEGO kind of like a puzzle; they like to build the set as a good challenge, and also build all the alternate models the instructions provide, but never go beyond that. Also, there are people who like the LEGO minifigures; they collect them, equip them with different accessories, build huge armies… oh, and not to speak of LEGO customizers who are not afraid to modify LEGO elements by cutting, painting, gluing – creating amazing artistic masterpieces – a heresy in the eyes of “purist” LEGO fans, but it is out there. And it is definitely a popular sub-hobby for some (including me). In summary I would say that as long as there are people with different tastes, and different ways to express themselves, there is going to be different ways LEGO is used.

I don’t see LEGO as being  different then before. It is just providing more choices for fans. And choices are always a good thing, especially in a creative hobby like LEGO! Sets that are focused on basic elements and creative building options are still there in the form of LEGO Creator. These are available for all age groups. There are also LEGO’s time-tested in-house themes like LEGO City, LEGO Castle, LEGO Pirates and LEGO Space that have been favorites of both kids and adults for generations. Licensed sets like LEGO Star Wars, LEGO Harry Potter, and LEGO Lord of the Rings are new addition and simply provide more building and creative opportunities. And there is also LEGO Technic and LEGO Mindstorms for those interested in robotics and engineering. So there are plenty to choose from.

As far as elaborate instructions helping or inhibiting new generation of LEGO fans, I would say it is important to pay attention to the age recommendation on LEGO boxes. They are not set in stone but are definitely there for a reason, and LEGO is very good at judging who to recommend a set for. The elaborate LEGO set with the hundred-page instruction is usually recommended for older teens and adults. They tend to be large, realistic models to satisfy older fans’ taste for perfection and a good challenge. For little kids instructions are a lot less complex and provide steps that will keep them entertained according to their skill level and attention span. And as I have mentioned before, some kids will always build according to instructions, and some will always free-build. Adults can encourage them to expand on their natural inclinations, but should also respect them. LEGO is already an educational toy – let children and adults experiment with it as they feel inspired!

So what do you think? How would you have answered the questions? Do you feel that LEGO is loosing the creative-edge and getting too much into structured building with specialized elements? How did you get into LEGO? Why do you like it? Do you prefer story-based sets or free-building? Feel free to answer any of the interview-questions yourself in the comment section below! Would love to know how you would have responded! 😉