by Thita (admin) on September 28, 2013
in Community Articles

Let me start this post with an assumption: you have been to an official LEGO store, right? No? Absolutely understandable, as they are not in every city or even country. How about a specialist store that carries LEGO, like a toy, hobby or gift-shop? Still no? Ok, still understandable, especially if you are a kid with limited options for transportation. But you have visited the Online LEGO Shop, correct? Anyone with an internet connection can do that (click on the right-hand side-bar links and they will take you to the Online LEGO Shop). At any of the above venues you have probably noticed the LEGO sets, LEGO brick boxes, minifigures and maybe even books that were available for sale. But have you ever given thought to the LEGO magnets, LEGO keychains and other novelty goods? Well, these are called “LEGO gear”, and that’s what we are going to talk about today. 🙂 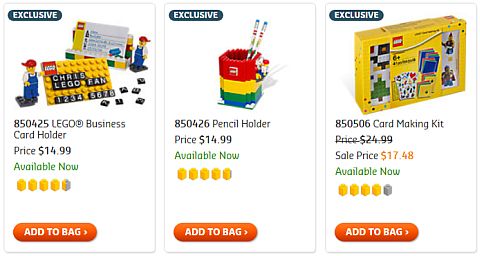 LEGO gear pretty much defines any LEGO set that contains very few to no LEGO bricks and are often novel in some way. LEGO magnets and keychains are the two most commonly available, but even besides those tons of LEGO gear are released every year – sometimes even exceeding the total number of building sets!

The challenge for collectors is that it is very difficult to keep track of all the LEGO gear released each year. Even at reputable LEGO set-guides and databases like Brickset and Bricklink the list is far, far from being complete. This is mostly due to three reasons: 1.) so many of them are released each year, 2.) even LEGO fans don’t bother with cataloguing them all, 3.) LEGO doesn’t really advertises them. 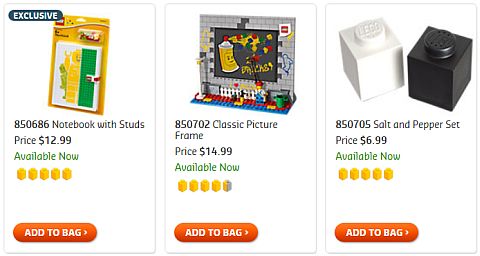 At the height of its popularity, LEGO was even able to sign contracts with the likes of Colgate and Nike to create LEGO Bionicle-themed shoes and toothbrushes, and advertise them heavily in the comics. (Yeah, I miss Bionicle…) That kind of big-name advertisement dwindled down though, and all we get now is iPhone cases, mugs, towels and erasers. Well sure, they are all-right, but not as cool as before…

In this article I’ll take you through the LEGO gear I own. Oh, yeah, one last point; LEGO related clothes aren’t considered LEGO gear. They’re called “LEGO wear”, which is a completely different thing.

First, there are these LEGO-themed playing cards. Not as awesome as they could be, since besides the minifigure-themed back, it’s a perfectly ordinary deck of cards. Nope, the Queens, Kings and Jacks are not minifigures, and the suits and numbers are not bricks. Very disappointing. Then there is this magnet of the LEGO logo. Not much to say about it, really…

And here are LEGO salt and pepper shakers, and a pencil-sharpener, shaped like minifigure heads. They’re much more novel, but I’m not going to use them since I want to keep them in as pristine condition as possible. 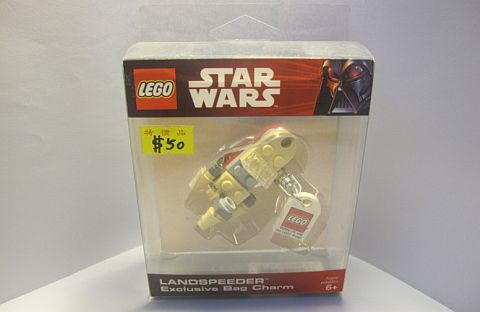 This one is quite interesting; it’s a bag-charm from 2008 (you can tell it’s from 2008 since Vader emblazoned the sets that year). It is like a key-chain with a micro-built LEGO model that you suppose to hang on bags. Unfortunately, the pieces are glued together, so the play-value is minimal. Not sure what glue is used, but if I have to make a guess, it’s probably that bonding-agent used in LEGOLAND Parks for the big models, and also used for LEGO magnets.

This one is more unique; it’s a LEGO pen with Chewbacca mounted on it – quite literally I might add. It’s fully customizable; there is a metal rod on which you can add the included pieces (and Chewbacca) in any order you want. These pieces are certainly not LEGO in a conventional way, but they still have stud-like connections that can more-or-less attach to the bottom of regular LEGO bricks. Now let’s take a closer look at the figure itself. As you can see from the pictures, it consists of three pieces; legs, body and head/torso – just like a regular minifigure. Unlike on the regular Chewy minifig though, there is a stud poking out from the top of the head (so it can attach to the other components). The neck has a hole going through it and is shorter than what you find on regular minifigs. The legs are a single, static piece that attaches loosely to the torso. You might be slightly bothered by Chewbacca’s “poo-brown” color (as my sister puts it). This is the original LEGO brown that has been retired and replaced with the new reddish-brown.

These custom embossed LEGO brick keychains are really great gifts you could give to people, even those who are not LEGO fans! You can find them in most LEGO brand stores and at LEGOLAND Parks. They come in the regular LEGO color spectrum: two shades of green, pink, purple, blue, black, white, red, orange, and slightly more expensive chrome-gold. It’ll cost you extra to emboss the name on, but it’s totally worth it. Note that not all places inked the embossment. I got these made in Japan, but when my aunt did some for souvenirs in LEGOLAND Malaysia, they didn’t ink them. There’s a chain version and a wire/string version, though the chain is more resilient and popular.

Now this is the type of LEGO gear that me and my dad avidly collect. They’re magnets, yeah, but look closer; they’ve got exclusive printing on both the magnet-stand and on their torsos! I’m not sure how many people would want a “Copenhagen” or “Malaysia” print, but look at that “I Love New York” shirt! Many people might want that. Oh yeah, I had hoped I’ll be able to get one with a London and Windsor print on my recent trip to the UK, but apparently not such thing exists – which is kind of weird if you ask me – so I just got the one that says LEGOLAND. I’m not sure how many different kind of these printed minifigs are there, but my guess is that there should be a Berlin, Anaheim and Orlando print. Please note that although the minifigs are glued to the magnets, the heads, caps, and printed tiles are removable and could be very useful! 🙄 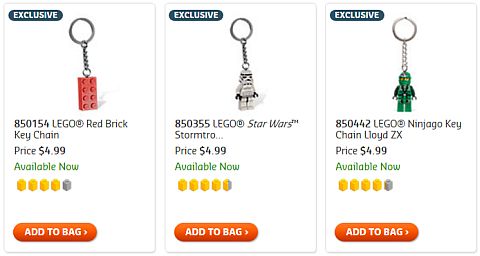 As you can see, LEGO gear can be very interesting and highly collectible. So next time you stop by at the LEGO store, or other toy-shop, check out their LEGO gear! You may find something unique! And you can also browse the Online LEGO Shop selection; look in the Apparel & Accessories, Home, Keychains, and Seasonal sections for interesting LEGO gear and novelty items. 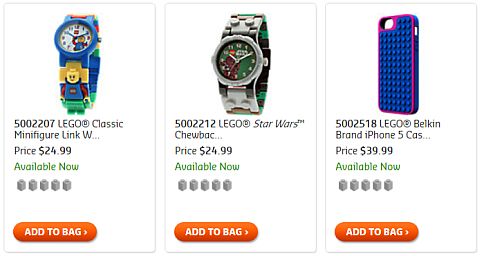 So that’s pretty much sums up my own LEGO gear collection. What about you? Do you own any special LEGO gear or promotional item? Feel free to share in the comment section below! Would love to compare notes with other LEGO collectors! You can also check out the links below to my previous articles on collecting LEGO related materials. Thanks for reading! 😉