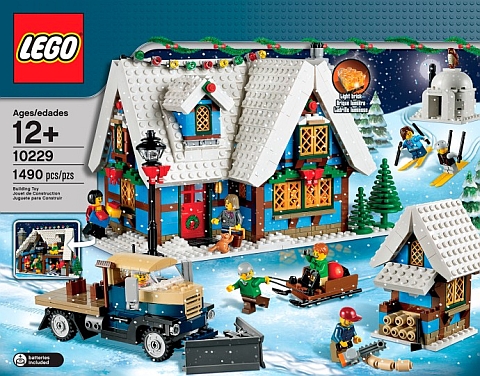 A connectionless attachment is essentially one that requires no studs, pins, axles, or any other device that makes two LEGO elements stick together. The reasons for using this technique are wide and varied; ultimately coming down to the needs in your LEGO model. In the case of the LEGO Winter Village Cottage, it is found in the igloo. The top dome is removed easily to allow play-access to the interior. In order to do this, a connectionless attachment has been added. 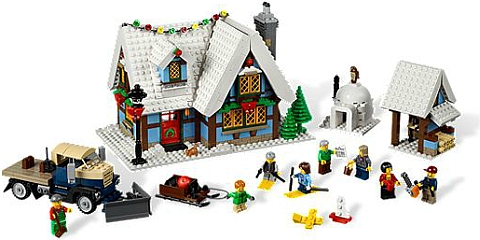 The main criteria for any connectionless attachment is a solid nestling setup to compensate for the lack of connections. Whether you have a ball that rests on a podium or a wheel ready to be launched (like in the #4183 LEGO Pirates of the Caribbean: The Mill set), they all need a solid place to nestle into. Remember that gravity is going to be your major obstacle when building with this technique. Therefore, when a builder wants to have a little more play action with their LEGO creation, their nestling mechanism has to accommodate that. Using LEGO slopes is a common way to achieve this, but the different heights of LEGO plates can just as easily work. 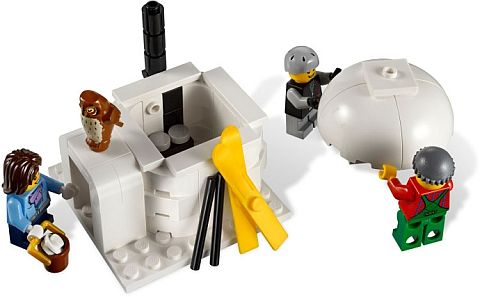 In the LEGO Winter Village Cottage set tiles are used to make a frame which you then nestle a 4×4 plate into, located right under the igloo’s dome. This basic approach accomplishes that key criteria for a good nestling mechanism; restricted movement. The frame you build prevents the dome from slipping off sideways when moved, while the top of the dome provides a nice lip that can touch the frame for support. This is probably the way I’d recommend practicing connectionless attachments before experimenting with trickier applications.

If you take a look at the snowplow in the LEGO Winter Village Cottage set, the one distinct feature you will notice is the nice wedge shape of the plow. And the plow can be easily removed and adjusted for storage at the back of the truck. So let’s examine how this was achieved. The base unit the plow-blades are mounted to is a solid angle shape. This is very important if you ever want to build something with a solid angle, as the key to this technique is that the point of the angle needs to feature some sort of solid connection. In this case it is a bar and clip connection. Other examples can be found in the snake vehicles in the LEGO Ninjago sets, where hinge-bricks and/or plates were used in the pointed nose sections. 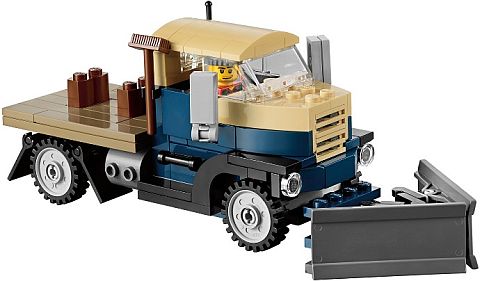 The reason why this is so important is that sharp angles are unnatural to LEGO’s square system. This makes those angles a natural weak point in any LEGO model. So if you don’t want your creation splitting apart, chances are you will need to design from the point first and then work your way back to the body of the model. You don’t need to use either connection method mentioned here, but a solid connection of some sort will help stabilize your design. 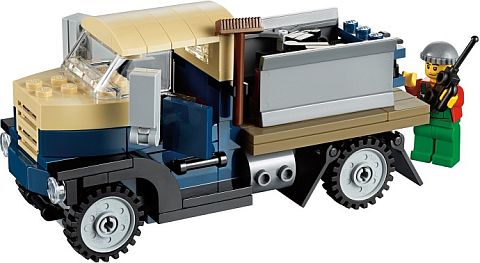 Now that we’ve gone through all the trouble talking about how important solid angles are, let’s look at some examples in this same set where the technique is not used at all; the angled roof of the LEGO Winter Village Cottage has many angled points, however the methods of securing these angles are absent. The lack of hinges and connections to fix these angles are primarily due to the fact that buildings are stationary models. This means they don’t need to withstand rough play or handling in the same way a snowplow would. Therefore this frees up some design space and allows the builder to focus on a few other important factors when making a good roof. 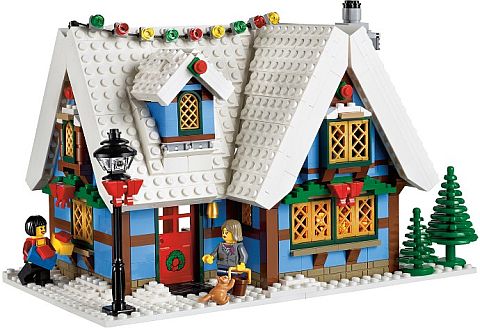 First up is the frame. With multiple angles in the roof, there is one important structure that will provide consistency throughout your model – it is the frame the roof rest against. In the LEGO Winter Village Cottage LEGO designers used A-frames in two places. Look at the walls that end in points; those are your frames. The principle behind making the roof looking good is to have each frame slope up at the same rate. This gives you the ability to still put different elements on the interior of the frames while keeping your roof in the right proportion.

The other important characteristic of any roof is stability; it needs to both have secure connection points and cover large expanses. This is why the larger sections of the roof use larger pieces – sometimes there’s nothing more solid than a really large element. As for its size, the roof uses a three plate layer; this gives you enough space to interlock nearly every plate with at least a couple of other plates. Ultimately you’re creating a very specialized LEGO brick. 🙄 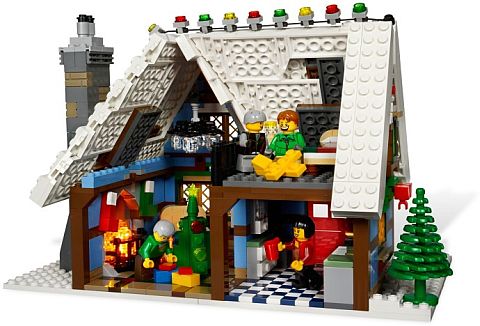 Finally, when you are building angled roofs from LEGO, you need to consider where they intersect. For the best results you’ll need to create the straightest edge possible, as well as clearing room for where the two sections of the roof meet. This is why tiles were used on one roof in the LEGO Winter Village Cottage; to get the studs out of the way.

Just because LEGO elements have studs does not mean you need to use them. Granted, you will give up a lot of sturdiness by not using them, but it should be your model that decides what techniques to use. Just keep in mind that your main obstacle with using connectionless attachments is gravity. So you have to provide some kind of frame to keep everything together.

A solid angle is something best built from the point of the angle backwards. It is a rugged design meant to handle rough treatment. Therefore, take this section of your model seriously when you are building something that is meant to be played with. This way you won’t have to constantly put your model together after it keeps falling apart.

When your angles are stationary the parameters of what you can do change dramatically. Angles become less of a point of reinforcing and more of a challenge to build around. Consistent resting points, hinges that match the size of the roof, and proper clearance will see you through most difficulties when dealing with complex roofs. Make sure to stock up on LEGO wedge-plates before attempting a project like this.

So what do you think? How do you like the LEGO building techniques in the LEGO Winter Village Cottage? Have you been experimenting with connectionless attachments and complex roofs? Feel free to share your own experiences, tips or ask questions in the comment section below! 😉