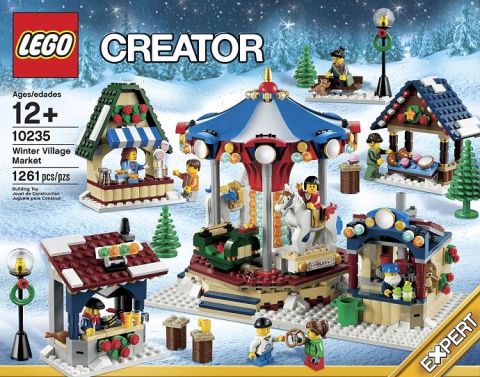 It’s time for the open-air market with all its sundry delights. Great food, fun games, and a carousel ride, what more could you ask for? I’ll tell you; LEGO building techniques! The LEGO Winter Village Market is in the LEGO Creator Expert Builder series, and boy, it is packed with novel ways to build! So let’s dive right in! 😀 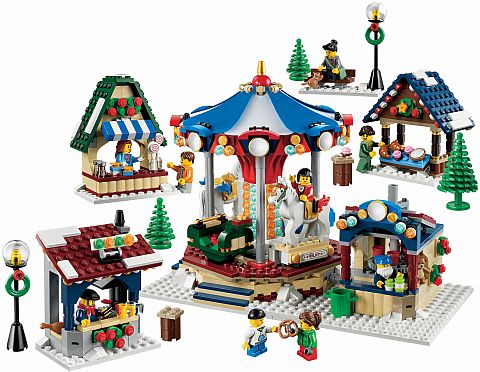 The most prominent LEGO technique in the LEGO Winter Village Market set is that the bucket-game and the carousel ride are connected. This is a very efficient technique that provides a lot of interaction with a single crank motion. Of course, in a mechanism like this you can expect gear usage, since both moving elements run on circular paths, but the thing we want to look at is how to chain mechanisms. In actuality it’s very simple; you just need a reliable point of contact. A band or belt could work for this, but they tend to snag or put unwanted pressure on your LEGO model. So the technique of choice is to use extended axles. You can get a really long LEGO axle and call it a day, or you can divide up the axle into sections. It’s easier to get the length you exactly need if you connect shorter axles, just make sure they’re all anchored with either gears or bushes. 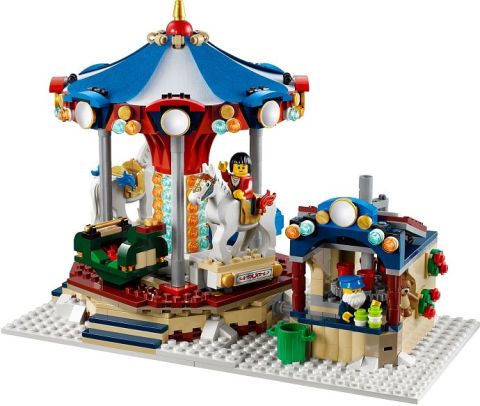 As for the connection-points you have two options. Either you use a sleeve and just create a longer axle, or you can connect them through the gears. The difference is gears will provide you with the ability to change speeds and/or change the direction of the rotation. You can overthink this technique really quickly due to all the moving parts. However, it all comes down to where the main drive-shafts (axles) are used that make up the heart of this technique. Once you have these in place, the rest is all about embellishing.

Now here’s a LEGO technique rarely seen. It is located right under the moving platform of the carousel. There you will build four ramps consisting of curved slopes with no studs on top. These are your action ramps. In essence they work similar to paddling which we looked at in the LEGO Monster Fighters Ghost Train set.  The difference is that the ramps are stationary. All you need to do is have a piece that will run over them consistently without catching. You could use tires or various other rounded LEGO elements to serve as an interaction point. 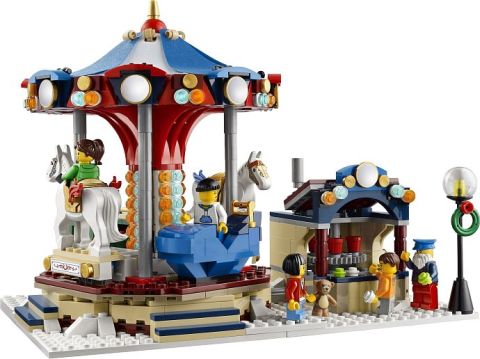 In the LEGO Winter Village Market flat lift-arms with rounded curve edges are used. From there LEGO designers just had to make sure the element with the rounded piece can move when it hits a ramp and then they are done. The complication in this LEGO technique is all about dealing with snags. You need to make sure the ramp is smooth and not too steep and that the interactive piece that works with the ramp does not accidently hit anything.

One thing you may notice about the LEGO Winter Village Market set is all the small stalls. They all have a similar function, but look really different from one another. This is actually surprisingly difficult to achieve if you don’t pay attention. Essentially a stall is nothing more than a small structure, usually with four posts and a roof. This can lead into identical builds real quick due to the simplicity of what is needed. The LEGO Winter Village Market set demonstrates a few simple ways to avoid this from happening.

First, find an element that does not have to be the same. In this case the roofs on each of the stalls have slightly different approaches; one slants forward, another slants back, while the other two form steeples. But even the two similar ones have different angles and widths to their roofs. The next method is to change color usage. One could be heavier with blues while another takes on reds. This goes a long way in creating variety and bringing out different emotions, since we associate different colors with different feelings.

Another option is to contour when you can. This can be anything from shaped bricks  (like the log bricks) to angled elements (like the facet bricks) at the hot food-stall. Finally, if you still need variety, put some accessories in front. A sign, a table, a display, etc. can cover up anything you can’t build around. Plus, it just looks cooler when you make all those small designs.

One element that always pushes the LEGO Winter Village sets to that Expert Builders level is how they manage to include a natural phenomenon like snow. Taken at face value, it is easy to overlook the effort that goes into this texturing technique. First, LEGO designers need to ask themselves; where would snow pile up? The easy answer is where people don’t walk. Therefore the larger piles are in out of the way places. 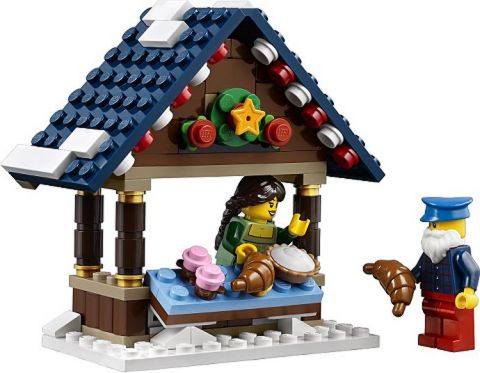 Next, they need to ask where would snow stop when encountering an object? This is where you get slope usage next to buildings as they get partly buried. Finally, they have to look at where would snow catch and collect? In previous LEGO Winter Village sets, this would be on window-ledges, but here we have it on the roofs. If you want to add snow to your model try asking the above questions and it will give you a good idea where to place all that white.

Chaining mechanisms is a lot simpler than you may think. The hard part is figuring out what two moving objects would naturally be seen right next to one another. You don’t want to break up a setting just for a functional design since those viewing the creation will get distracted by the incongruity. The reason why we don’t see action-ramps in a lot of sets is because they work best in fixed locations. A fixed location often limits how versatile a toy is and therefore not a go-to technique for LEGO.

Avoiding similarities is another one of those lines that define a novice from an expert builder. It’s the subtle touches and distinctions that make an expert’s work notably different. Applying this even in very mundane situations like market-stalls will go a long way in more advanced LEGO buildings. Snow… there’s nothing quite like it.  It is easy to add to a LEGO model since all it really needs is the color white to represent it. The trick is asking the right questions to have a good application for its use.

So what do you think? How do you like the LEGO building techniques in the LEGO Winter Village Market? What about the carousel, the little shops, and the other techniques we talked about? Feel free to share your own experiences, tips or ask questions in the comment section below! 😉