In this Brick Breakdown series I review official LEGO sets, from the perspective of looking at interesting building techniques we can all learn from. Today we will be looking at the #21103 LEGO DeLorean Time Machine. You can also check out the previously discussed LEGO techniques found in official LEGO sets at the end of this article. So let’s begin! 🙂 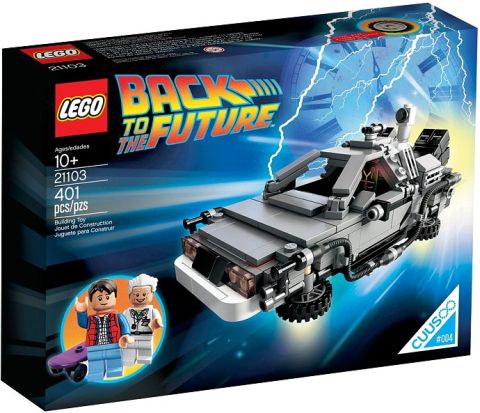 First of all, check out that box! You don’t normally get LEGO sets with boxes this fancy (except for the LEGO Architecture line). Open it up and you don’t just get an instruction manual, you get an instruction book! The box and instructions may be nice, but the real question is how’s the LEGO DeLorean itself? Well, if you’ve been looking through reviews on other LEGO fan-sites, you will find consistent complaints about the roof, the doors, and the blocky front of the car. LEGO fans actually liked the original fan-created version of the DeLorean submitted to CUUSOO more than what LEGO designers ended up doing with it. 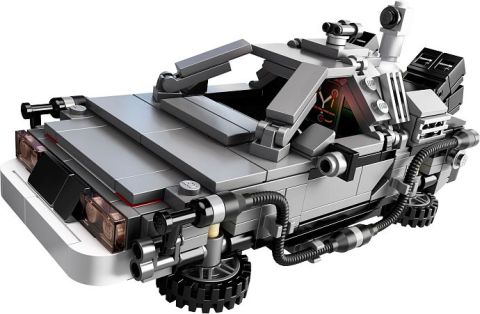 We can only speculate on why LEGO designers decided to change the model the way they did, but I venture to guess that it had to do with considering things like the availability of the right type of elements in the right colors and how they fit into LEGO’s current production-plan. This is especially true when they have to also accommodate dozens of other sets being produced at the same time. Thankfully, the LEGO DeLorean Time Machine still give us some excellent techniques to examine.

➡ SCALING TO THE SMALLEST SECTION

What the LEGO DeLorean Time Machine represents is a scale-model of an actual car. This means that when designing it, the scale of one part needs to match with the rest of the model. If any section is off, it becomes really obvious in how unbalanced the model looks. So the question is how do we approach this type of creation? In essence it all comes down to the smallest detail being built first. You may think that the printed tiles (like the dashboard-display or the license-plate) are those elements, however those are merely printed designs and could be changed easily.

The element that sets the scale for this particular model are the minifigures. This means the complex doors and oddly shaped windshield of the DeLorean have to fit the size of the minifigures. And this is where many LEGO fans feel LEGO designers could have done a better job making sure that the minifigs fit properly and that the model is sturdy. However at such a small scale that’s not an easy thing to achieve while still staying true to the original model. The take-away for LEGO fans is that you will want to scale your model around the smallest and most delicate part. For instance, the doors on the DeLorean are a nice challenge to work out first before moving on to other areas. And this could also mean that you may decide to just ignore the minifigures and create on a different scale. It is up to you where you want to go all out to be accurate and where you are willing to compromise.

Most LEGO sets that include more than one way to use the elements included (2-in-1 and 3-in-1 LEGO Creator and LEGO Technic sets come to mind) will require you to completely dismantle one model before you can build the other one. The LEGO DeLorean Time Machine uses a slightly different approach. Thanks to the three Back to the Future films, there was the option of having three different variations of the DeLorean in one set. And the nice thing is that the differences between the variations are purely cosmetic in nature. 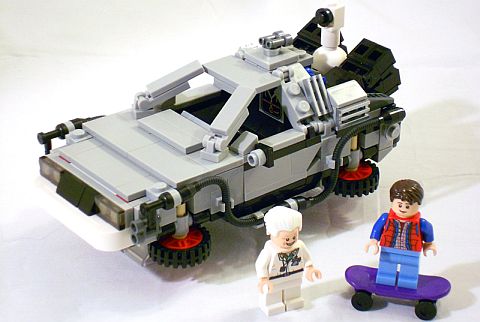 You can look at your own LEGO creations as an evolutionary process. How will your LEGO mech change over time? Will the LEGO vehicle you built age or get remodeled? How about a new business moving into your LEGO building and change the decor to suit their needs? By thinking of these questions, you can create a story for your LEGO model that gives it extended play-life. In the LEGO DeLorean Time Machine set this simple things; like changing the hub-caps and license-plate, along with adding or removing a few pre-built elements. This makes for an exceedingly dynamic LEGO model with very little fuss.

Looking at the LEGO DeLorean Time Machine you see a wide range of fancy angles. Many of these are actually built in dramatically different ways. The back exhaust-fins differ from the sides of the windshield, which are nothing like how the wheels can turn. All of these techniques however deal with angling LEGO elements. Before we talk about the key feature of this technique, it’s important to emphasize there are major weaknesses to consider, with the prime weakness being stability. Most angled elements can only handle decorative pieces – they are not suitable for large constructions. If you do plan to use them for heavier use, more thought should go into their design. The wheels on the LEGO DeLorean are a good example of a reinforced joint to handle play. 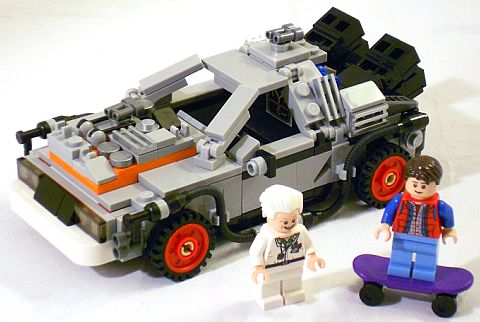 As for the technique itself, it all comes down to what the angle rests on. This is where the angle will be defined and also how stable it will be. There are dozens of ways to have an angle; you can use a hinge-brick, bar-and-clip connection, or even a Technic pin assembly. The LEGO DeLorean uses a wide range of resting places for the various angles. The back exhaust-fins are anchored to a couple of hinge-bricks (to add the right angle, tiles are sandwiched among the pieces to prop the fin up). The sides of the windshield, on the other hand, use the model itself to rest upon. Finally, the wheels have a plate with modified-clip to act as a purposely created rest to stop the wheels from turning at the wrong angle.

Scaling anything is often one of the most challenging pursuits of a LEGO builder. The ability to visualize an object not meant to be recreated from LEGO is both an exercise in skill and imagination. However, if you can plan out your creation from its smallest detail first, you’ll have an easier time of it. Creating variations of the same model has always been more of a LEGO fan approach than a LEGO mainstay. This is because LEGO fans worry about running out of pieces in the right colors, and also we often like to refresh an old creation to give it new legs. The LEGO DeLorean model serves to remind us of that possibility.

Using angles are definitely more of a finishing technique. However, some experts have used them to great effect for more than just finishing work. By understanding how important where an angle rests is, we can explore the technique and its possibilities further. As with most LEGO models, it all comes back to having a good foundation as we have discussed several times before in this series.

So what do you think? How do you like The LEGO DeLorean Time Machine and the techniques we discussed here? Have you ever built a scale-model of a real-life object? Do your keep your LEGO creations long-term and changing them as you see fit? Feel free to share your own experiences, tips or ask questions in the comment section below! 😉