On the first image you can see the house from the front, along with the garage with Homer’s car, a BBQ, a skateboard-ramp, a wheelbarrow and a mailbox. I have to say that this is one of the most realistic looking LEGO houses ever; simple clean details with nice colors. Even if you are not a Simpsons fan you might want to consider this house for your LEGO city. The house is also an accurate replica of The Simpsons’ house in the TV series. 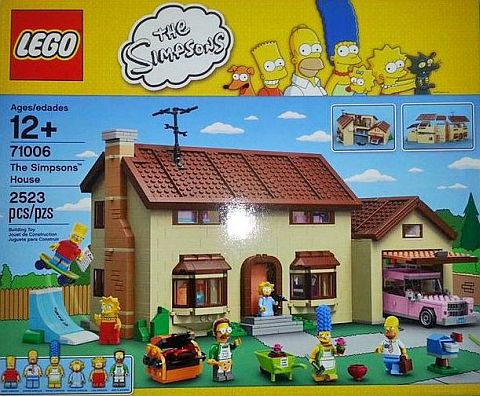 There are six minifigures included with the LEGO The Simpsons House: Homer, Lisa, Bart, Maggie, Marge and Ned Flanders. As we have discussed previously they come with specially molder heads to resemble the characters as closely as possible. Some LEGO fans are not happy with the moulded heads, however this is not the first time LEGO went this direction; the LEGO Toy Story minifigures also have unique head pieces, and even unique long legs! Speaking of legs, notice the printing on Bart – he got the first printed short legs in LEGO’s history! Also, Maggie either has even shorter legs, or a shortened torso – it is hard to make out from the picture, but it is definitely something unique. 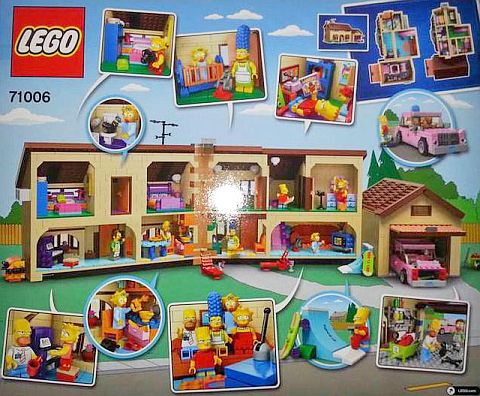 On the back of the box you can see how incredibly detailed the interior is. It contains all the main rooms in the Simpsons’ family house; all the bedrooms, the living room, kitchen and the garage. As far as I can see it is only missing the attic and the basement (it does seem to have at least a crawl-space under the house). This kind of detailing on a LEGO house has been quite rare, although it is becoming more common due to demand by LEGO fans; the LEGO Modular Houses have been getting more and more detailed interiors, and the LEGO Friends buildings are all very detailed inside.

So what do you think? How do you like the #71006 LEGO The Simpsons House set? And what about the minifigures? Is this a set you are considering getting once it becomes available? Or are you going to pass? Feel free to share and discuss in the comment section below! 😉