In this Brick Breakdown series I review official LEGO sets, from the perspective of looking at interesting building techniques we can all learn from. Today we will be looking at the #70807 The LEGO Movie MetalBeard’s Duel. You can also check out the previously discussed LEGO techniques found in official LEGO sets at the end of this article. 🙂 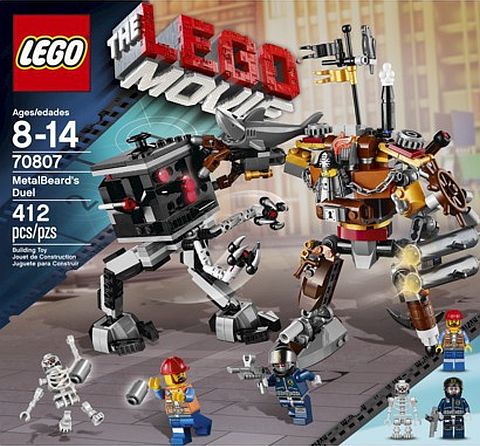 There’s nothing quite like two giant robots fighting. On one side you have a larger than average Micro-Manager, and on the other side you got MetalBeard – the half pirate half machine contraption. This is probably enough for quite a few LEGO fans to make the #70807 The LEGO Movie MetalBeard’s Duel an instant buy. And LEGO goes even one step further and gives us three unique minifigures, including a robotic skeleton. 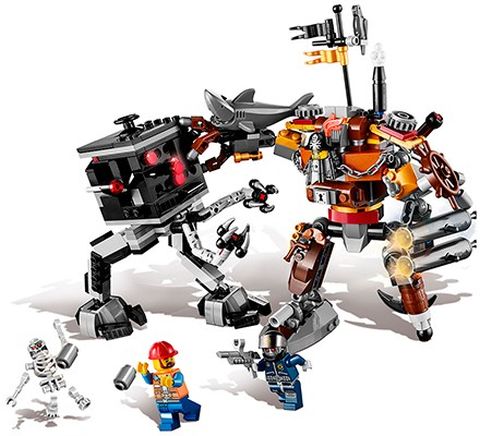 The #70807 The LEGO Movie MetalBeard’s Duel set is all about having an extreme battle, so if you like to build mechs and strange robots, you are in for a treat. However if fighting between big machines is not your cup of tea, I would pass on this set and go for one of the 2-in-1 models from The LEGO Movie line, simply because they are much more interesting. There is little in the way of profound building techniques in the MetalBeard set, nor are there a whole lot of rare elements, but let’s see what we got…

The pirate-robot is clearly a blending of the pirates theme and steampunk. The question is how do you, as a LEGO builder, approach a concept like this? The simple answer would be that you would use one theme to create the dominant shape, while the other is used for accenting. This does not mean there will be no input from both themes in either category, but to make a model more successful one should be the primary. 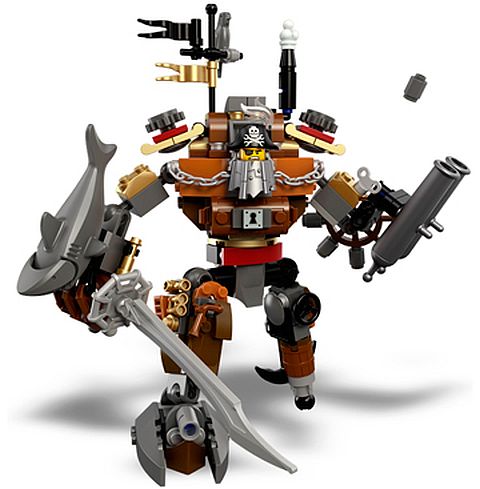 In the case of MetalBeard, the steampunk theme is used to define the shape, which is that of a steam-powered robot. The secondary theme of the pirates line also helps a bit to give the robot some unique features with the peg-leg and single arm. Once the shape is determined you can move on to decorations. Here the pirates theme gives the primary defining character; the shark, double-cannon arm, treasure-chest, cannon-foot, anchor, mast with flags and parrot, pistol, and giant cutlass all point to this fact. Here the steampunk theme is free to make just a few embellishments, which in this case happens mostly in the form of adding standard steampunk coloring with shades of brown as well as metallic colors like gold and silver-ish grays. There is also a steam-pipe and gears for shoulder-armor indicating the steampunk style, but note how all these elements are secondary to the pirate decorations.

And that’s mainly it, if you want to use this technique in your own LEGO creations; break your model down into two phases of shape and decorations. Then decide which one will be primary and which secondary in these two categories. This gives you the flexibility of adding as much or as little of each of the defining themes as you like.

The fact of the matter is that if you don’t plan from the beginning for enough space for your minifigures while you are building LEGO vehicles, it could get tricky to create that space later. In The LEGO Movie MetalBeard’s Duel set if you open up the hatch at the top of Micro-Manager you’ll find the most generic measurements to fit nearly any minifigure inside it. As you know, a minifigure stands roughly four LEGO bricks high. However, since you don’t want hats or hair-pieces running into the roofs of vehicles, it’s a good idea to make the inside space of a vehicle at least five bricks high if the minifig will be standing, or four bricks high if sitting. Also, it couldn’t hurt to throw in an extra LEGO plate’s worth of height. 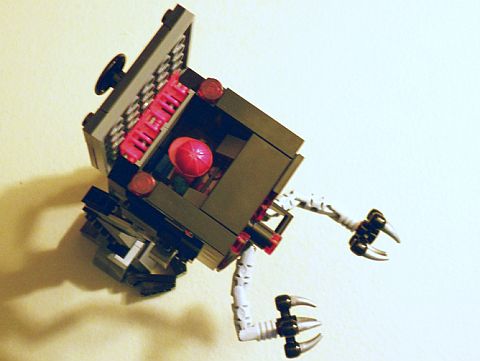 The other aspect of the minifigs we need to find space for is the arms. They obviously don’t fit in the 2×2 space that the legs and torso can fit into. So this means we need to extend the space to a 2×4 area to make sure there is enough room for the arms. But this still doesn’t take into consideration other attachments that can bulk up minifigures, like long arms, armor pieces, etc.

So then have to clear out another 2×2 space directly behind where a minifigure sits or stands. This area doesn’t have to go all the way down to the floor since most minifigures back or hair pieces stop around hip level. This space arrangement can be fully seen inside the Micro-Manager, giving you a perfect example of what the most generic space needed for sitting minifigure inside a vehicle.

Creating mash-ups between two completely different themes is at the root of many novel LEGO designs. A robot-pirate, a ghost-train, a ninja-mech have all been recent creations that LEGO has produced. Studying these sets is a good way to learn how to create interesting LEGO designs and also how to use LEGO elements that you would not normally use together.

The reason why it is so important to include minifigures in our vehicles – aside from the obvious need for a driver – has to do with putting things in context. We get a sense of scale and dimension when we use LEGO’s iconic minifigs to represent people. It also allows us to compare and even combine our LEGO designs with others’ more easily since what they have in common is the scale of the minifigure. It is not always necessary to have minifigs in a LEGO model, but it’s a nice way to give ourselves common ground when building with LEGO.

So what do you think? How do you like the MetalBeard’s Duel set and the techniques we discussed here? Have you every tried combining different themes for an unusual effect? Ever have trouble fitting minifigs into your LEGO vehicles? Feel free to share your own experiences, tips or ask questions in the comment section below! 😉