As you probably know, Target is one of the largest LEGO resellers, at least in the USA. In fact, at least in my area, they have a much better LEGO selection than Wal-Mart, and they even beat Toys’R’Us in both selection and definitely prices. Recently Target published a fun infographic in their online magazine called A Bullseye View.

As you can see from the infographic below, LEGO is the largest brand in Target’s toy department, Target stores sold 4.5 billion LEGO pieces in 2013, according to their research LEGO tops kids’ wish-list, and December is the biggest month for LEGO sales at Target. 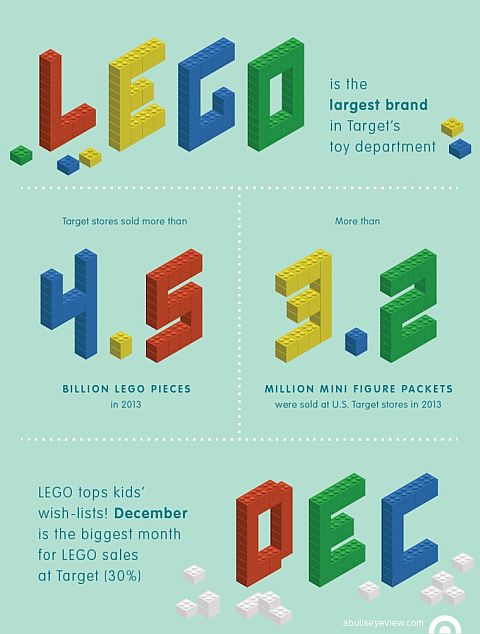 LEGO has definitely been on a winning streak in the past several years (despite the slumping economy) which was even brought to new heights by the success of The LEGO Movie. I think any smart retailer would take advantage of the trend, but surprisingly, I have only seen Target really capitalizing on it – smart move, I would say…

What do you think? Do you shop for LEGO at Target? How do you like their selection? And how about their discounts and special deals? Feel free to share your thoughts – and the deals you found at Target – in the comment section below! 😉