As you have probably heard by now, The Simpsons is having a very special episode tonight titled “Brick Like Me”. This is the 550th episode of The Simpsons, and will premier this evening at 8/7c on the Fox channel. The Simpsons Facebook page posted the following teaser poster to get you ready for the show. So let’s take a look at what to expect. 🙂 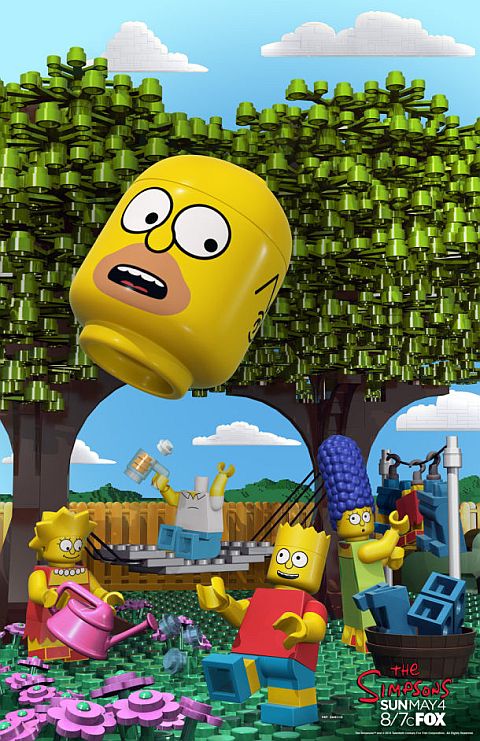 There is a really interesting interview with executive producer Matt Selman in the TV Guide, where he reveals some tidbits about how the episode came about. I will quote from the interview below and you can also read the original here: Exclusive: Inside The Simpsons’ Very Special LEGO Episode. I also got some extra info from the Wikipedia page about the episode. You can see that here: The Simpsons – Brick Like Me 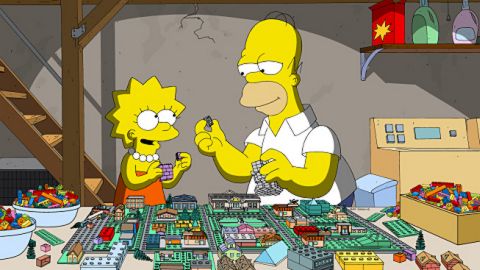 Matt Selman said in the interview, “We’ve literally been at this thing for two years — twice the time it takes to do one of our regular episodes — and that’s way too long for comedy people to live with the same jokes. It’s been an epic process. First, we had to convince (executive producer) Jim Brooks and our showrunner, Al Jean, that a LEGO episode was a great idea and not just an excuse for our staff of nerds who grew up in the ’70s to crack LEGO jokes. There needed to be a real emotional story there.” The Simpsons staff also had to have the approval of the LEGO company. “We’re pretty picky about how our brand is represented, and The Simpsons, which is so famous for its satire, has its own distinct point of view,” said Jill Wilfert, the LEGO Group’s vice president of licensing and entertainment. “No one at the show is used to dealing with creative input from the outside, so there was certainly some back-and-forth to get it all right. But, at its core, the LEGO brand is all about creativity and imagination. We respect that in others.” 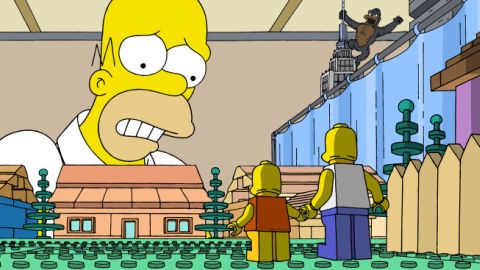 The idea of the episode was conceived several years ago, when the toy company approached Fox about producing a LEGO set of the Simpsons’ home, including minifigures of Homer, Marge, Bart, Lisa, Maggie and Ned Flanders, which went on sale in February. While that merchandise was still in the works, Wilfert pitched the idea of a LEGO couch gag: “We went to the guys at The Simpsons and said, ‘Wouldn’t it be fun if you did your opening couch sequence LEGO-style?’ They quickly came back to us and said, ‘Forget the couch; let’s do an entire episode!'” The Simpsons showrunner Al Jean also explained that the episode is not trying to copy The Lego Movie, saying: “None of us saw the movie until very late in the process-long after our story was set.” Matt Selman added: “Any similarities are completely unintentional. We didn’t even know there was a movie. Nobody at LEGO told us about it until after the point of no return. But at the eleventh hour, we did manage to sneak in a little wink to the film.” The episodes writer Brian Kelley spoke about how the episodes extensive CGI forced the staff to work in a whole new way, saying: “With this style of animation, everything needed to be locked in very early on, meaning we had to settle on our story and our jokes and commit to them with no room for screw-ups. On top of that, every character we used had to be built from a 3-D model, which took a lot of time and money.”

Kelley also explained that a big church sequence in the episode gave the staff a chance to include all of Springfield’s citizens, saying: “We pushed as much as we could to get everyone into those pews. We were like, More Characters! More characters! because we knew our audience would hate us if any of their favorites didn’t get to be LEGOs. You won’t see Señor Ding Dong or the Grumple, but i think we crammed in everyone else.” Al Jean also spoke about how LEGO and The Simpsons were an easy fit, saying: “But, in a way, the LEGO-Simpsons is an even easier fit-and not just because our characters and their minifigures are both yellow. Both styles are similar and deceptive in their simplicity. When you get right down to it, LEGO is just bricks, and Matt Groening’s design for our characters is really just eyeballs and a few lines-easy enough for any kid to draw.” Kelley also spoke about The Simpsons staff were big fans of LEGO, saying: “We are major LEGO fans at The Simpsons, and the LEGO master builders are huge fans of our show. It’s been a fantastic, rewarding experience to pull this off together. After 550 episodes, we really need that shot in the arm. Now we’re pushing ourselves for more big episodes. Onward and Upward!” Selman also said that no one on the staff took issue with the episodes tamer approach, saying: “Some of our episodes can get a little outrageous and push the envelope, but we would never want to be rude to our friends at LEGO. Let the guys at South Park do their own LEGO episode and go nuts. For us, it was all about sending a love letter.”

So what do you think? Are you planning to watch The Simpsons tonight? If you do, feel free to come back later and let us know how you liked it so we can all discuss. 😉