As you probably know already the LEGO Minifigure Online Game is going to be ready for open beta-testing sometime this month (you can register here to get notified when it starts). A few days ago Funcom, the developer of the game, released a trailer featuring the Medieval World setting of the game. It looks really fun! 🙂

In case you are not familiar with it, the LEGO Minifigures Online Game is a free multiplayer adventure, based around the LEGO Collectible Minifigures. Players will be able to pick from a variety of minifigs, each with a unique set of abilities. Through player vs. player battles and team challenges, players will be able to unlock power bricks, which can be stored in various configurations in order to increase the power of their minifig’s abilities. The game will include a variety of themes and places, such as from LEGO Pirates, LEGO Space, LEGO Castle and much more.

The trailer here gives us a glimpse of the Medieval World setting of the game, where the characters are trying to capture the evil sorcerer Elementius the Pieromancer who is wanted for pie-throwing. The heroes are called upon to protect the King by setting off on an adventure to battle trolls, ogres, and dragons. Looks fun, isn’t it? As I have mentioned, the open beta testing of the game should begin sometime this month. If you would like to participate and get notified when the game is available for testing register here: LEGO Minifigures Online Game Beta Registration 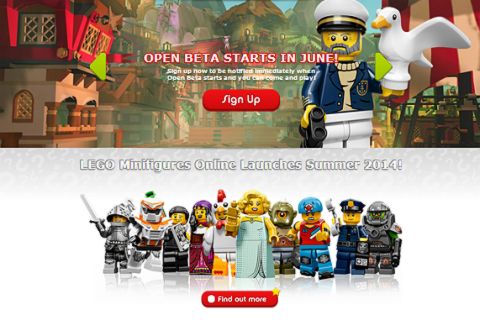 So what do you think? How did you like the trailer? Are you looking forward to the game? Did you notice any interesting details from the trailer? Feel free to share and discuss in the comment section below! 😉

Next post: How to become a LEGO Master Builder