In this Brick Breakdown series I review official LEGO sets, from the perspective of looking at interesting building techniques we can all learn from. Today we will be looking at the #31019 LEGO Creator Forest Animals. You can also check out the previously discussed LEGO techniques found in official LEGO sets at the end of this article. 🙂 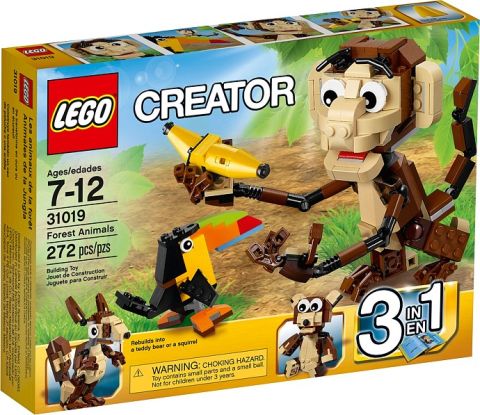 Out of all the various lines LEGO currently produces, LEGO Creator is the one that captures the original ideas found in the earliest LEGO sets by using mostly basic LEGO elements, and by providing instructions for several alternate models to use the same parts in various ways. Although the #31019 Creator Forest Animals set provides several alternate builds, for this article we’ll stick with the main Monkey, Banana, and Toucan build when discussing techniques. This configuration uses the most pieces, and also features some interesting construction techniques. So put your hiking boots on, we’re heading for the forest.

If you have had the chance to build with a wide variety of LEGO sets, you know that within the LEGO system there are different building forms. The most popular of these is referred to as LEGO System, which is all about bricks and studs. Another popular building system is LEGO Technic with lots of pins, gears, and special bricks with holes on the sides to create detailed and realistic vehicles and machines. The method we are looking at today is called LEGO Constraction. Constraction is a combination of “Constructible” and “Action Figure”. This system of building borrows both from LEGO System and LEGO Technic, but also contains ball-joints, flexible elements, and shell-coverings. LEGO Bionicle was the first to delve into this form of building, and since then the building method infiltrated into other LEGO themes as well.

If you are interested in going full throttle into LEGO Constraction building, then picking up a LEGO Hero Factory set is a great way to start. However, if you feel more comfortable with LEGO System, and just want to dip a toe in to LEGO Constraction techniques, the LEGO Creator Forest Animals will work great for you. You will get a chance to work with ball-joints and other joint connectors in the neck, shoulder and hips area, but the rest of the set is strictly LEGO System. So all in all this set gives you a glimpse into the most basic method of creating an action figure, while staying within the system that you are probably more familiar with.

This is a technique that surprised me when I first saw it. To enable the monkey’s head to connect with the pin coming off the body, it needed to have a piece mounted vertically. To do this, LEGO designers looked at using a modified 2×2 brick, for which they needed to create a vertical hole in the head. Since the brick was 2 studs wide, that’s how wide the hole had to be. As for front to back, the brick was only 3 plates thick, but there are 2 studs to every 5 plates of thickness, so they needed to add something to create the extra thickness. In this case a tile on top and plates on the bottom. 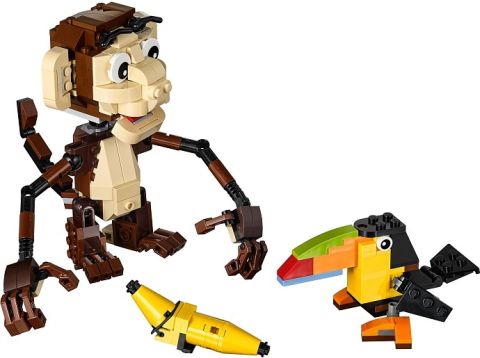 However LEGO designers still needed to connect the contraption to the head. So instead of regular plates, for one of the plates they used a modified plate with a bar off one side. When turned vertically the bar acts as a handle off the top. All that was left to do was to put a plate with two clips on one side of the hole, and the whole build could be clipped in and mounted vertically. It is hard to explain how brilliant this assembly is, but when you put the set together pay special attention this section as it uses a rather unique way to have vertical alignment.

LEGO Constraction has definitely come a long way since LEGO Bionicle was first introduced, and it is nice to see it included more and more in regular LEGO System building. Whenever you need to include joints in your own LEGO creations, Contstraction is the way to go. Also, LEGO recently introduced small ball-joints with the LEGO Legends of Chima sets and LEGO Mixels that LEGO System builders may feel less intimidated by. The vertical mounting done in this set does not in any way represent the only method in which you can mount something vertically. Rather it represents a unique usage of clips to accomplish this need in fairly tight constraints. Often the size of the piece you want to mount will determine which method to utilize in any given situation. 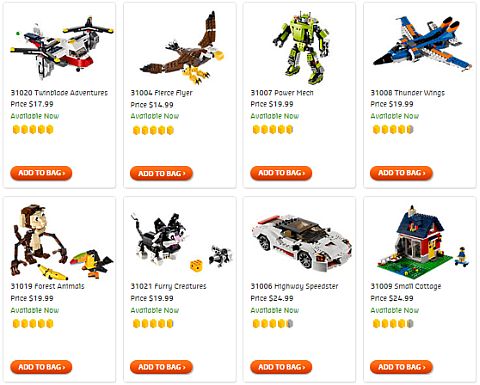 What do you think? How do you like LEGO Creator sets? Do you prefer them over licensed or more specialized sets? Have you attempted to build animals and other creatures from regular LEGO elements? Did you find it challenging? Feel free to share your own experiences, tips or ask questions in the comment section below! 😉