To coincide with the recent release of the Guardians of the Galaxy film, LEGO launched three new sets we haven’t talked about much as of yet. Guardians of the Galaxy is like the biggest movie this summer that achieved both critical and financial success. In fact a sequel has been already announced, scheduled for the summer of 2017. If you haven’t seen the movie yet, I recommend you give your local movie-theatre a visit. 🙂 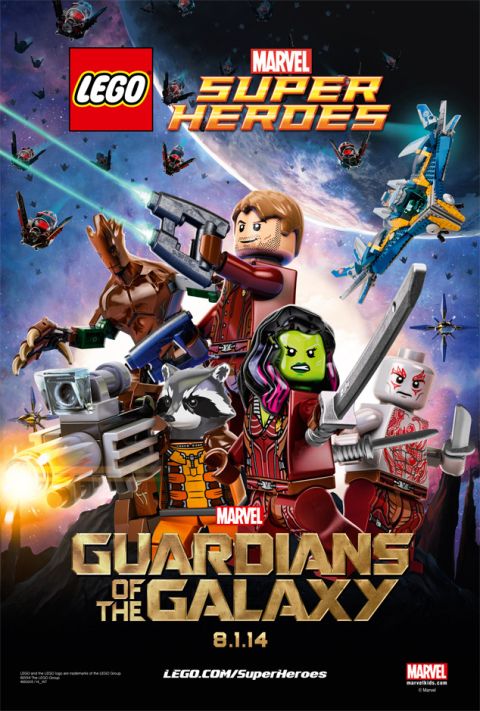 Even before the movie hit theatres LEGO fans were already excited about the film because excellently made minifig version of the Guardians of the Galaxy trailer by Antonio Toscano. You can check out the trailer below, and there is also a link from the video where you can see both the original trailer and the LEGO version next to each other – which is interesting to see.

Guardians of the Galaxy are not as well-known (well, at least they weren’t before the film’s release) as some of the other Marvel Super Heroes, so below is the descriptions of the main characters from the official LEGO Marvel Super Heroes website as well as the sets they appear in. 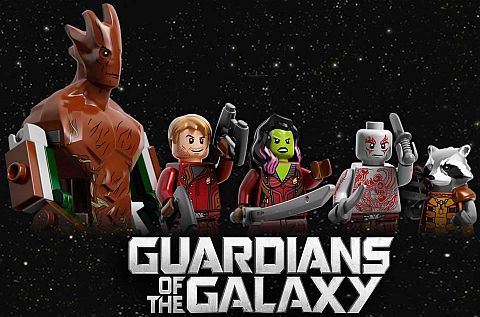 Star-Lord: Born on Earth but drawn to the stars, Peter Quill became the interstellar adventurer known as Star-Lord. Quill acquires an immensely powerful artifact and attracts the attention of those who would use its power to spread chaos and destruction. Equipped with his high-tech blasters, a dependable starship and a mix-tape of music from home, the headstrong Star-Lord must rally an unlikely team of interstellar misfits – Guardians of the Galaxy – for an all-or-nothing attempt to protect the cosmos. Star-Lord appears in the #76019 LEGO Marvel Super Heroes Starblaster Showdown, and the #76021 LEGO Marvel Super Heroes Milano Spaceship Rescue sets.

➡ #76019 LEGO STARBLASTER SHOWDOWN: Help Star-Lord keep the priceless orb safe with the Starblaster! Launch into battle against the Sakaaran’s Necrocraft in the awesome Starblaster and help Star-Lord to escape with the orb! Place the Nova officer in the cockpit and launch into the sky. Fold back the wings for high-speed pursuit mode and then flip them up to activate arrest mode. Use the space blasters and boot thrusters of Star-Lord to outwit the enemy and protect the priceless orb! Includes 3 minifigures with assorted weapons and accessories: Star-Lord, the Sakaaran and a Nova officer. 196 pieces. Price: $19.99 – BUY HERE 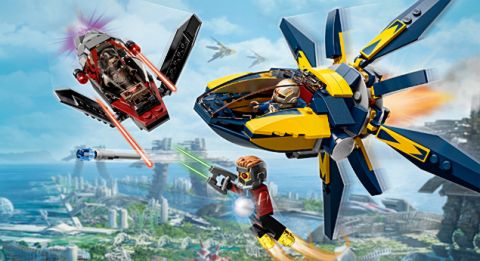 Groot: The tree-like Groot hails from a world designated only as “X,” which is populated by sentient plants. At times playful and childlike, Groot makes up for his limited vocabulary with his ability to manipulate and grow his giant bark-covered form as needed – skills he has long used to aid and abet his friend Rocket Raccoon’s schemes. Now as the fate of the cosmos hangs in the balance, Groot must join the Guardians of the Galaxy for an adventure that will test the limits of even his monstrous strength. Groot appears in the #76020 LEGO Marvel Super Heroes Knowhere Escape Mission set.

Rocket Raccoon: Despite his diminutive stature and raccoon-like appearance, the scrappy mercenary known as Rocket possesses a remarkable mastery of munitions and battle tactics. A host of illegal genetic and cybernetic experiments on the planet Half-World have ensured that Rocket is the only creature of his type in all the cosmos, and until recently he has been content to roam the stars in search of adventure and fast cash with his partner in crime, Groot. But when an ominous threat leaves the entire universe at risk, Rocket must bring his mechanical genius and ingenuity to bear as a member of the Guardians of the Galaxy! Rocket Raccoon appears in the #76020 LEGO Marvel Super Heroes Knowhere Escape set.

➡ #76020 LEGO KNOWHERE ESCAPE MISSION: Team up with Groot and Rocket Raccoon to plot an escape from Knowhere! They’ve discovered the rare orb in the mining fields, only to be ambushed by the bad guys. Evade shots from the huge bazooka assembled by the Sakaaran and the evil Nebula and return fire with Rocket Raccoon’s custom space blaster. Leap into action with the gigantic posable Groot to confront the sword-wielding Nebula. Launch a fierce counter-attack so Rocket Raccoon can get away in the mining pod with the precious orb in its grabbing claw! Includes 3 minifigures with assorted weapons: Rocket Raccoon, Nebula and the Sakaaran, plus Groot figure. 433 pieces. Price: $39.99 – BUY HERE 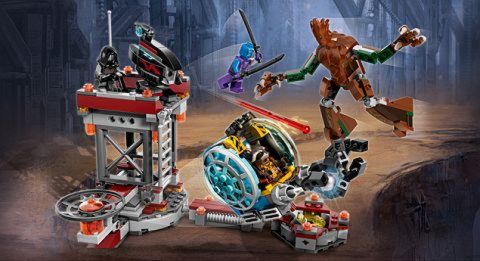 Drax: Fueled by a personal vendetta against those who cost him his family, the rough-edged warrior called Drax the Destroyer has room in his life for little else besides revenge. To this end, the heavily tattooed Drax has long relied upon his proficiency in battle and his razor-sharp blades to do his talking for him. After making a tentative alliance with the Guardians of the Galaxy, the untamed Drax must learn to put the needs of the universe before his own. Drax appears in the #76021 LEGO Marvel Super Heroes Milano Spaceship Rescue set.

Gamora: The last surviving member of the peaceful Zehoberi species, Gamora was transformed into an unparalleled warrior through rigorous training and physiological augmentation. For years Gamora has used her formidable fighting skills and master swordsmanship in service to a dark power, earning her the reputation of the “most dangerous woman in the universe.” Gamora now seeks to redeem her past crimes as a member of the Guardians of the Galaxy, and waits for an opportunity to bring vengeance to those who have manipulated her. Gamora appears in the #76021 LEGO Marvel Super Heroes Milano Spaceship Rescue set.

➡ #76021 LEGO MILANO SPACESHIP RESCUE: Join the Guardians of the Galaxy for the ultimate battle against evil Ronan! Prepare for an epic clash between the Guardians of the Galaxy and the ultimate villain, Ronan! Ronan zooms into this epic deep-space battle in his personal Necrocraft, backed up by the Sakaaran, and holding his all-powerful Cosmi-Rod ready to strike. Luckily, Star-Lord is prepared to launch a counter-attack with the equally potent Hadron Enforcer and 2 iconic space blasters. Steer the mighty Milano Spaceship into battle with Gamora and Drax, firing the stud shooters and flick missiles to repel this evil threat to the Galaxy. Includes 5 minifigures with assorted weapons and accessories: Star-Lord, Gamora, Drax, Ronan and the Sakaaran. 665 pieces. Price: $74.99 – BUY HERE 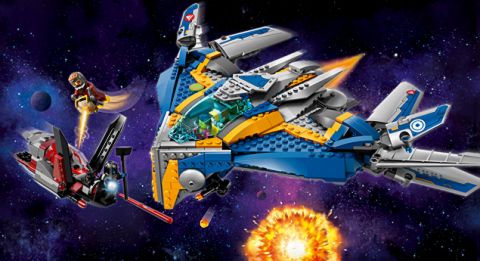 The minifigs in all three sets are wonderfully detailed and I’m pretty sure collectors love them. Rocket Raccoon especially is a great minifigure, accurate to the film yet LEGO-ish enough. I also really like the Nova Corps Officer from the #76019 LEGO Starblaster Showdown set, and Gamora from the #66021 LEGO Milano Spaceship Rescue – a really sweetly detailed minifig. As far as the sets themselves, I don’t want to make this article any longer than it is already (we can discuss them in more detail in a full review later) but I would say that I only heard good things about the #76021 LEGO Milano Spaceship Rescue, with several people claiming it as their all-time favorite LEGO set – a pretty strong endorsement. If you are interested in any of the new LEGO Guardians of the Galaxy sets (along with other LEGO Marvel Super Heroes sets) you can find them at the Online LEGO Shop. 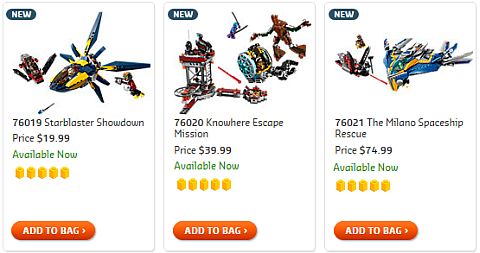