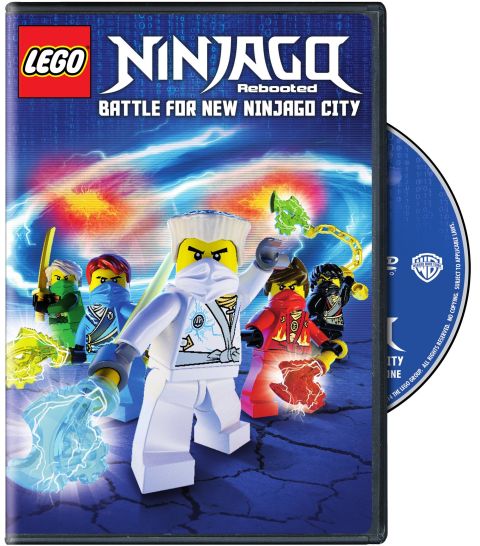 LEGO Ninjago Rebooted – Battle for New Ninjago City consist of one DVD disk with the first four episodes of the new season: The Surge, The Art of the Silent Fist, Black Out, and The Curse of the Golden Master. The total run-time of the episodes is 92 minutes – that’s just about an hour and a half of Ninjago fun! Languages available are English and Spanish with subtitles in English only.

Here is the synopsis of Ninjago Rebooted – Battle for New Ninjago City: “Our heroes face a new technological menace! Victory in the Final Battle between the Gold Ninja and the Overlord has ushered in a new era of peace and begun a technological renaissance. Time has passed and the Ninja have become obsolete in this new hi-tech world. Just when they think all is safe in Ninjago, they’re called back into action when the reclusive inventor Cyrus Borg warns them the Overlord has survived as a digital virus and is trapped within the Digiverse. The Ninja will learn the Overlord seeks to steal Lloyd’s golden power to enable him to escape his digital prison and reign as the great prophesized destructor, ‘The Golden Master’. And to aid his villainous plot, he’s created a new technological menace more powerful than any foe the Ninja have ever faced – Nindroids.”

If you haven’t gotten it already you can find the previously released Ninjago Season 1 and Season 2, and also the brand new Ninjago Season 3 – Part 1 on Amazon. Here are the links:

Warner Bros. Home Entertainment was also kind enough to provide us five copies of Ninjago Rebooted – Battle for Ninjago City, so we are going to run a little contest/giveaway. Below are the rules, so if you would like to participate and win your own copy read on!

➡ HOW TO ENTER: We are going to keep this very simple; to enter the contest just finish the following sentence in the comment section below:

➡ WHAT ARE THE RULES: Nothing difficult; just complete the sentence. You can say whatever you like. One entry per commenter please. If you comment more then once, only the first comment will count. Other than that just keep common-sense courtesy and manners otherwise your answer can be as serious or funny as you want! Have fun!

➡ HOW TO WIN: Contest will run from now until Sunday, August 10th at midnight US EST. Once the contest is closed I will ask my little brother (don’t worry, he is old enough to know his numbers) to pick five numbers between however many comments there are. So if there are 100 comments I will ask him to pick five numbers between 1 and 100. Whichever numbers he picks are the winning comments.

➡ WHAT YOU WIN: The winning commenters will receive one copy of Ninjago Rebooted – Battle for New Ninjago City DVD.

➡ HOW TO RECEIVE YOUR PRIZE: If you are the winning commenter I will contact you by email. Please make sure your email address in your comment is correct! You send me your shipping address (no PO Box please) and Warner Bros. will send you the DVD! Best of luck! 😉