There has been so much new information on LEGO BIONICLE since our last update (see: LEGO Bionicle Confirmed & Teaser Video!) that I felt it was time to write another round-up article about all the exciting details. 🙂 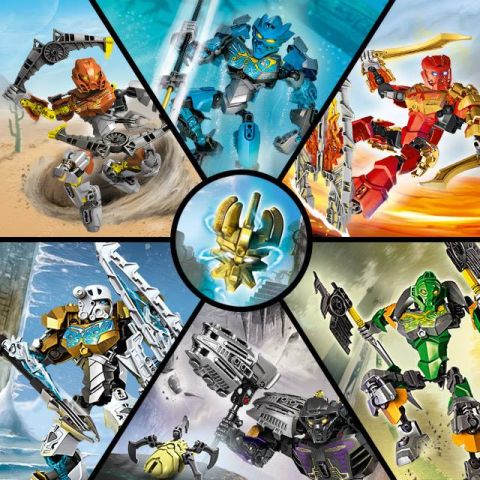 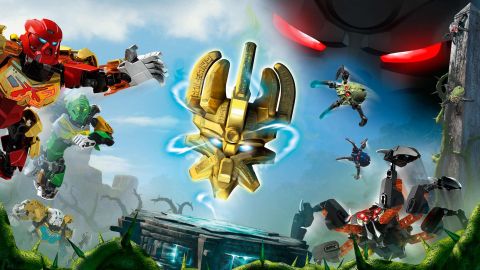 LEGO BIONICLE – GALI (Master of Water): Gali is friendly and peaceful. But when the situation calls for it, she can be as fierce as a raging ocean. She finds injustice intolerable and always goes out of her way to help the ones who need it. Gali’s mellow ways have made her the most liked among the heroes. She is generous, a good listener and friend. Only one little thing: she just can’t seem to tell a joke right! Powers: Water control and the ability to out-swim any known creature. 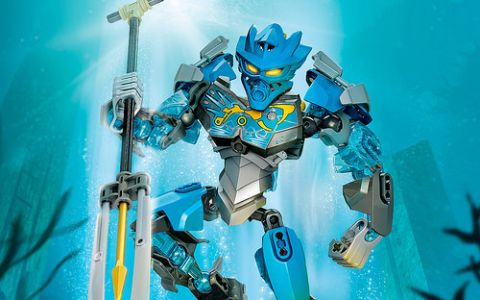 LEGO BIONICLE – KOPAKA (Master of Ice): Kopaka is noble and reserved. Upholding his own strict moral code he strives to be perfect and always “do the right thing”. A fact that often makes him appear formal and even cold in the eyes of others. Luckily Kopaka’s clumsiness and his not too solid direction sense help the other heroes remember that, after all, Kopaka is just a Toa like them. Power: Freezing touch and resistance to cold. 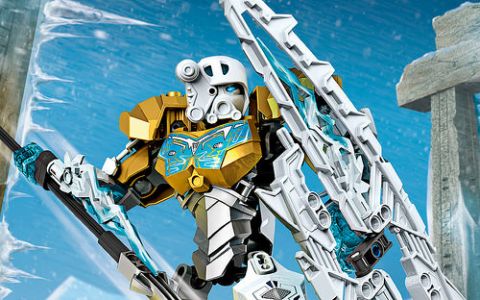 LEGO BIONICLE – LEWA (Master of Jungle): Lewa is a true daredevil, a cunning rogue whose foolhardy manners have often gotten him into trouble. His rebel approach is a double-edged sword that the other heroes both love and hate. On one hand, Lewa finds new ways, on the other these ways sometimes lead to new trouble! Powers: Communes with plants and the wind. 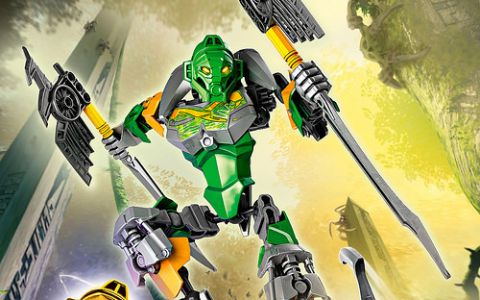 LEGO BIONICLE – ONUA (Master of Earth): Onua is grounded and wise. He likes to spend his time alone meditating under the stars. Like an underground cave, receptive and silent. And… Snoring! Though Onua rarely says a word, the other heroes have come to respect this sleepy giant. They know that when he speaks, his crude voice caries guidance and wisdom. Powers: Night vision and the ability to create earthquakes. 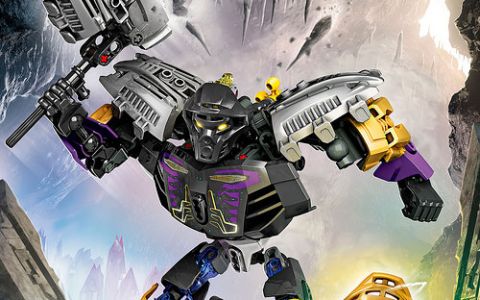 LEGO BIONICLE – POHATU (Master of Stone): Pohatu is unyielding and fearless. Renowned for his unbreakable stamina, he is arguably the toughest of all the heroes. With firm resolution and mysterious stubbornness Pohatu strides forward as a fearless vanguard leading the way of the heroes. Well almost fearless. Pohatu does NOT like the dark. Powers: Breaks and hurls rocks with unspeakable strength. 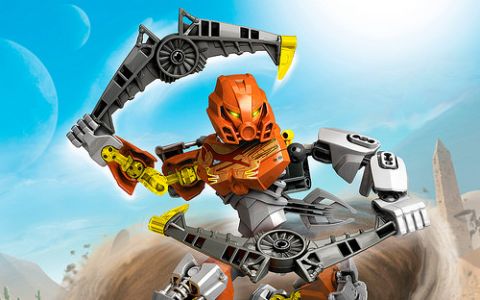 LEGO BIONICLE – TAHU (Master of Fire): Tahu is hot-tempered and brave. He likes to excel and thinks of himself as the most heroic of the heroes. His forgetful nature has gotten him into trouble at time, but Tahu seems to be born under a very lucky star, and somehow always come out on top. Powers: Fire control and resistance to heat. 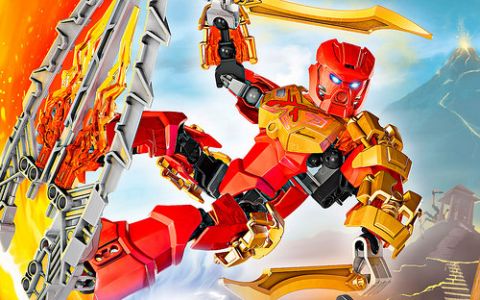 There is also an interesting video that introduces us to the story, and where it all began. I’m sure this will open up a lot of discussion amongst LEGO BIONICLE fans. At this point there are no plans for a TV show related to BIONICLE, instead the saga will be revealed though videos on the official LEGO BIONICLE website, so you might want to keep checking for updates.

Below is the official press-release for the return of LEGO BIONICLE from the recent New York City Comic Con. Attendees of the event also received an exclusive LEGO BIONICLE mask in clear color (pictures below). There is also a very interesting and detailed recap of the Comic Con BIONICLE reveal at FBTB.net (direct link to article). 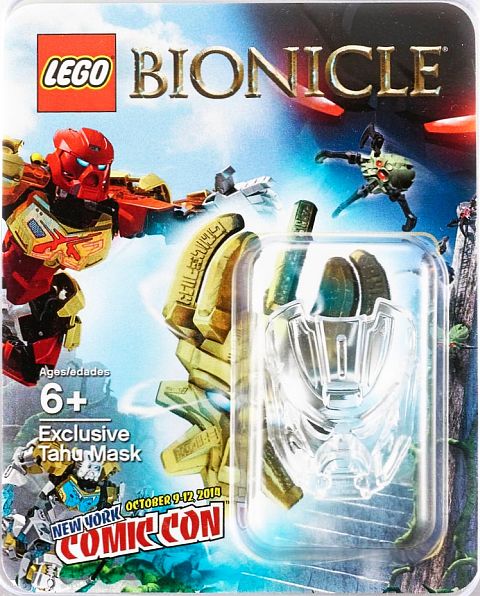 -Richly Reimagined Storyline Will Engage Fans of All Ages-

“We are thrilled to announce the relaunch of the LEGO BIONICLE franchise, which was one of our most popular LEGO franchises and our first ‘constraction’ or constructible action figure line,” said Michael McNally, Senior Director of Brand Relations, The LEGO Group. “We are eager to introduce and immerse a new generation of children in this rich character-driven world and can’t wait for fans of all ages to interact with the new story.”

Can the Toa Save Okoto From the Latest Threat? The new storyline takes place on the mythical island of Okoto, where the forces of darkness are on the move and the evil Makuta is once again materializing. He is overcome by the desire for the three mythic masks that will cast the world into darkness – the Mask of Creation, the Mask of Control and the Mask of Ultimate Power.

The desperate island inhabitants enlist six heroes – each masters of a sacred element – called the Toa- to help save their beloved island. The Toa must embark on a quest for Okoto’s ancient power masks that will allow them to unlock the full potential of their elemental powers. Only when the heroes are united, will they be able to battle the forces of evil, defeat Makuta and save Okoto.

To help fans bring the exciting story to life, The LEGO Group will offer a variety of exciting new LEGO BIONICLE sets from each of the different factions, ranging in price from $9.99 – $19.99 each:

➡ #70778 LEGO BIONICLE Protector of Jungle: Beware! The evil Skull Spider is mounting an attack deep in the jungle. Swoop to the defense of the Protectors’ village with the awesome Protector of Jungle, a sturdy, buildable figure featuring a dual-tone mask with pop-off trigger. Adjust the arms and legs to create fearsome battle poses. Then unleash the huge Air Elemental Flame Bow’s rapid shooter and send the Skull Spider scurrying for safety. 70 pieces. Price: $9.99

➡ #70779 LEGO BIONICLE Protector of Stone: Look out! The Skull Spider is lurking in the sand dunes near the Protectors’ desert village. Send out the mighty Protector of Stone to block the dangerous invader. Adjust the arms and legs of this durable figure for a variety of formidable battle poses. Whip up a vortex of sand with the giant Elemental Sandstorm Blaster and pin back the Skull Spider with the rapid shooter. Just don’t let this evil creature close enough to pop off that precious mask. 73 pieces. Price: $9.99

➡ #70779 LEGO BIONICLE Protector of Water: Watch out! The Skull Spider is trying to burst the bubbles of the Protectors’ underwater village. Blow this unwanted visitor out of the water with the Protector of Water’s rapid-shooting Elemental Torpedo Blaster. This robust figure, with BIONICLE head and shell and 2 turbines, is built for action play, so don’t delay – intercept the evil foe before it grabs the mask and seizes power from the Protectors. 71 pieces. Price: $9.99

➡ #70781 LEGO BIONICLE Protector of Earth: Underground alert! The crystal mine is under attack from the Skull Spider. Spin the Protector of Earth’s powerful crystal Star Drill to bore through rock and confront the evil intruder. If the Skull Spider latches onto the Protector’s BIONICLE head, it can pop the trigger and release the mask. Unleash the Elemental power of the rapid shooter to fend off the villain and keep control of the underground. 66 pieces. Price: $9.99

➡ #70782 LEGO BIONICLE Protector of Ice: Danger! The Skull Spider is leaping from a crack in the ice to attack the Protectors. Put the freeze on the evil intruder with the Protector of Ice’s rapid-shooting Elemental Ice Blaster. This mighty ice warrior with BIONICLE head and shell is built for ferocious battles, so spin the awesome ice saw blade and take down the Skull Spider before it can pop off the mask. 68 pieces. Price: $9.99 CAD $12.99

➡ #70783 LEGO BIONICLE Protector of Fire: Emergency! The Protector of Fire is under attack from the Skull Spider emerging from the molten lava lake. This sturdy, highly posable figure is fully equipped for the heat of battle, so strike back with the flame swords and open fire with the rapid-shooting Elemental Fire Blaster. You must take down the thieving invader before it can pop off the Protector’s mask. 69 pieces. Price: $9.99

➡ #70786 LEGO BIONICLE Gali – Master of Water: Gear up for an epic underwater duel to claim the precious Golden Mask of Water! Attach the shark fins to the feet of Gali – Master of Water and dive deep to the ancient ruins in the oceanic crater. Connect the fins to the harpoon to create a powerful elemental trident to attack the Skull Spider. Activate the battle arm to fend off its attempts to pop off Gali’s mask. The all-powerful Golden Mask simply must be safeguarded from evil forces. 87 pieces. Price: $14.99

➡ #70785 LEGO BIONICLE Pohatu – Master of Stone: Summon the awesome elemental power of Pohatu – Master of Stone to defeat the Skull Spider! Attach the convertible Jeterangs to the feet of this powerful, posable BIONICLE figure and launch into the sky. When you locate the Skull Spider, transform the Jeterangs into 2 huge Stormerang weapons and get ready to battle for the Golden Mask of Stone. Resist all attempts to pop off Pohatu’s mask, and activate the bashing battle arm to send the Skull Spider flying! 66 pieces. Price: $14.99

➡ #70784 LEGO BIONICLE Lewa – Master of Jungle: Match up against the evil Skull Spider with Lewa – Master of Jungle! Power up the dual-purpose X-glider to soar into the sky. When you spot the Skull Spider crawling from the ruins, swoop down to the ground and convert the X-glider into 2 massive battle axes. Prevent the thieving creature popping off Lewa’s mask using the 2 swords and turn the wheel to power up Lewa’s bashing battle arm. You must fight hard to protect the precious Golden Jungle Mask from the forces of evil. 85 pieces. Price: $14.99

➡ #70789 LEGO BIONICLE Onua – Master of Earth: Dig deep with Onua – Master of Earth to claim the mystical Golden Mask! This durable, highly posable figure with 4 golden BIONICLE shells and bashing battle arm is fully geared up for underground combat against the Skull Spider. Burrow underground with the turbo shovelers while evading the evil Skull Spider’s efforts to pop off Onua’s mask. Then convert his turbo shovelers into a massive earthquake hammer, the only tool powerful enough to break through to the Golden Mask. 108 pieces. Price: $19.99

➡ #70788 LEGO BIONICLE Kopaka – Master of Ice: Prepare for a chilling mountaintop conflict with Kopaka – Master of Ice! Watch out for the Skull Spider crawling from the snow, trying to pop off Kopaka’s mask. Adjust the arms and legs of this heavily armored figure to create fearsome battle poses. Fend off the evil creature’s attacks with the frost shield, bashing battle arm and the mighty Elemental Ice Spear. Get to the precious Golden Mask first then convert the shield into avalanche skis to escape. 97 pieces. Price: $19.99

➡ #70787 LEGO BIONICLE Tahu – Master of Fire: Heat up the BIONICLE action with Tahu – Master of Fire! Attach the lava surfboard to the feet of this powerful, posable figure and surf into the volcanic crater in adrenalin mode. Then turn the surfboard into 2 awesome elemental fire blades ready for combat. Activate the bashing battle arm to swipe away the Skull Spider’s attempts to pop off Tahu’s mask and get to the magical Golden Mask first. 89 pieces. Price: $19.99

So I think that’s enough to digest for one day… what do you think? Are you excited about the return of LEGO BIONICLE? What do you think of the story? Feel free to share and discuss in the comment section below! 😉

Next post: LEGO Modulars – get them while you can!