by Thita (admin) on November 7, 2014
in Building Techniques

One of the issues LEGO fans run into while building their own LEGO creations is needing LEGO elements with studs on both tops and bottoms. As you probably know, there are no such standard LEGO elements. LEGO bricks and plates have a top with studs, and holes at the bottom. However there are legitimate reasons why someone would want to have such elements. 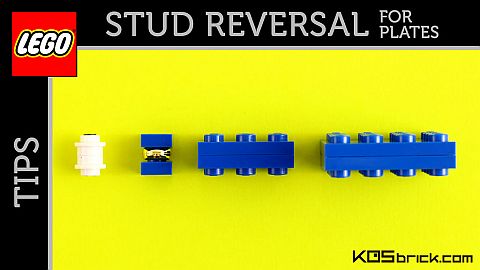 We have actually discussed the issue of reversing studs on LEGO bricks a few years ago (see: LEGO Building Technique: Inverting Studs), however since then more techniques have been discovered by creative LEGO fans, and also LEGO released some new elements that can be used for the purpose. LEGO fan Kosmas Santosa nicely summarized the available techniques in a couple of videos, that I will share with you below. 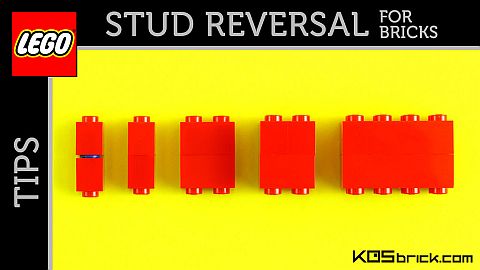 ➡ INVERTING STUDS ON LEGO PLATES: These are particularly useful techniques as you can achieve a very thin stud reversal. (1.) The first method uses a 1×1 round plate with a hole in the middle. This element is fairly new, but quickly became a fan-favorite due to its usefulness. In the video below two of these plates are combined with a cut section of a flexible or rigid LEGO hose. (2.) The second technique uses the ring from the LEGO Lord of the Rings sets. This method achieves having two receiving ends instead of two studs. Unfortunately the ring has only appeared in a few sets and only comes in chrome-gold, however if you can get one you will find it very helpful for all sorts of applications – including this one. (3.) The third technique uses the handles of LEGO buckets. For this technique the plates you are inverting need to be at least 2×3 studs. (4.) The last technique uses the lever handles to invert the studs on LEGO plates. This technique – and the previous one – can be used for large LEGO plates as well.

➡ INVERTING STUDS ON LEGO BRICKS: Here you will be learning how to reverse standard LEGO bricks. (1.) The first technique uses the same method we discussed a few years ago (see article link above) using LEGO Technic half-pins available in many LEGO sets. With this technique you can connect bricks to bricks or bricks to plates. The downside is that there is going to be a little bit of a gap where the ring of the Technic pin is exposed. The upside is that this is a very versatile technique you can use for 1×1 LEGO bricks all the way to the largest ones. (2.) The second technique uses 1×2 “cheese” slopes. This is a particularly nice technique as it doesn’t put any pressure on the elements, there is no gap between the connected bricks, and the connection is very sturdy. Also, you can use 1×1 “cheese” slopes to connect LEGO bricks to LEGO plates with no gap in between them. (3.) The third technique uses 3 mm flexible or rigid LEGO hose pieces to connect the bricks. The fourth technique mentioned in the video is simply a more esoteric variation of this.

There is one technique that is not mentioned in either of the videos. This method uses a small LEGO wheel that has basically two reversed studs already. It can be attached to both LEGO plates and LEGO bricks to invert the direction of your building. 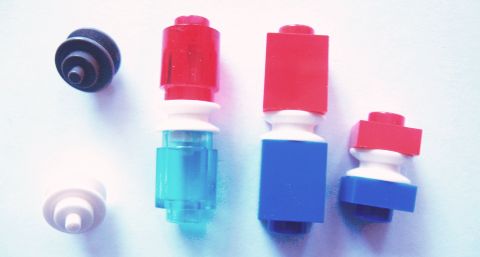 I hope these techniques help you in your own LEGO projects! What do you think? Have you used any of the techniques discussed here? Are you planning to? Feel free to share and discuss in the comment section below! Also, if you know of other creative and useful LEGO techniques you can share those as well. Happy building! 😉