One of the most interesting new themes in 2014 was LEGO Ultra Agents. It is based on the typical police chasing badguys type of background, but with a high-tech twist; including drones and hackers and also includes access to an app where you can play out more of the story. The theme has been obviously popular as LEGO is going to continue it with a series of new sets in 2015. We have talked about the new wave of LEGO Ultra Agents sets before (see: 2015 LEGO Ultra Agents Sets Details!), however at that time there we didn’t have a picture of one of the sets, the #70169 LEGO Ultra Agents 4×4 Agent Patrol. But now that we do have some images, I thought it would be a good idea to look at this set as it is quite interesting. 🙂 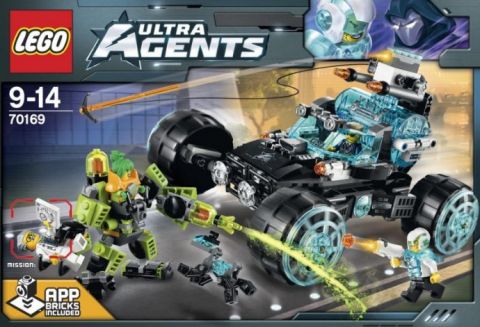 The #70169 LEGO Ultra Agents 4×4 Agent Patrol is 475 pieces, and the price is going to be $49.99. It includes four minifigures: Agent Trey Swift, Agent Jack Fury, Toxikita, Professor Brainstein. And there is also P.U.P., a robot police dog. The two vehicles included are a large 4×4 patrol car for the police and a small mech for Toxikita. 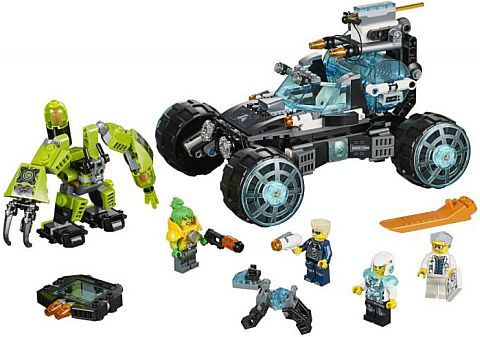 As far as play features, the 4×4 Agent Patrol is definitely fully armed with the new type of blasters and a spring-loaded harpoon launcher. If you look closely you will notice that there is a new attachment to the spring-loaded projectile to make up the harpoon, which looks pretty exciting. The Agent Patrol probably has other features as well that we can’t see on the picture, but the point is this vehicle definitely means business.

On the side of the baddies, we have Toxikita in a bright-light-orange armor. This armor has been included in previous LEGO sets, but never in this color. Toxikita pilots a small lime-green mech that has one arm with a claw attachment, while the other arm ends in a blaster.

The minifigures are also quite exciting, especially the agent with the brand new helmet and trans-blue armor. LEGO is using a new technology next year where they are able to mould together trans-clear elements with regular LEGO colors into one piece, allowing helmets to have clear visors and other details without having to attach them separately. The new helmet and armor will also be included in another 2015 LEGO Ultra Agents set, the #70170 LEGO Ultra Agents UltraCopter vs. AntiMatter.

Next post: 2015 LEGO Star Wars new life to the Galaxy