The Art of the Brick by Nathan Sawaya

There is a recently released LEGO book I have been eyeing for some time, and finally had a chance to read. It is The Art of the Brick: A Life in LEGO by Nathan Sawaya. Most people know Nathan as the guy who quit his job as a lawyer in New York City to create amazing art with LEGO bricks. As he sounds like a interesting person I was really looking forward to this book, and I thought to share my thoughts on it with you. 🙂 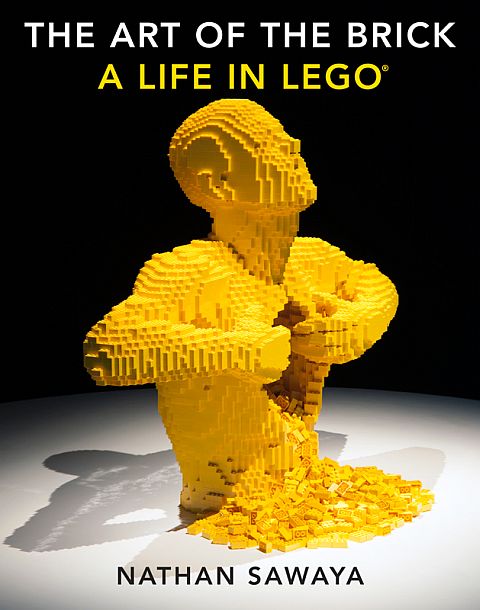 Nathan Sawaya is world renowned as the artist who turns heaps of LEGO into mind-boggling sculptures. Millions around the world were introduced to his work through his very popular global art exhibitions (also titled “The Art of the Brick”), which CNN called one of the top 10 “must see exhibitions in the world”. In 2012, Artnet, ranked Sawaya the 8th most popular artist in the world. In addition, Nathan is also officially recognized by LEGO as one of the best LEGO builders in the world and is endorsed as a LEGO Certified Professional.

Nathan keeps two full-time art studios; one in Manhattan and the other in Los Angeles. It is estimated that he owns more LEGO bricks than any other single individual, with approximately 1.5 million bricks in each of his studios. Besides public exhibitions, his artwork is commissioned by collectors, athletes, celebrities, and private individuals. 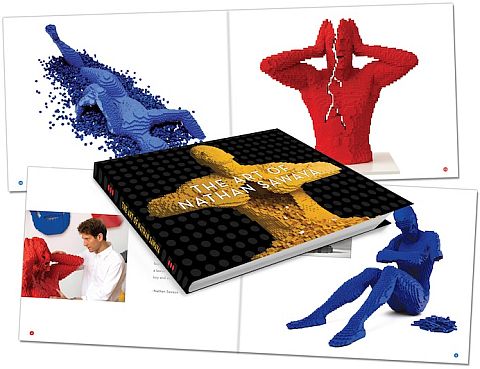 The book itself showcases some of Nathan’s most popular works. Here is the official description: “Nathan Sawaya is renowned for his incredible, sometimes surreal, sculptures and portraits—all made from LEGO bricks. The Art of the Brick is a stunning, full-color showcase of the work that has made Sawaya the world’s most famous LEGO artist. Featuring hundreds of photos of his impressive art and behind-the-scenes details about how these creations came to be, The Art of the Brick is an inside look at how Sawaya transformed a toy into an art form. Follow one man’s unique obsession and see the amazing places it has taken him.” The book is 248 pages, hard cover, with beautiful full color photographs. It is a tastefully done art-book published by No Starch Press, well known for their excellent LEGO books. 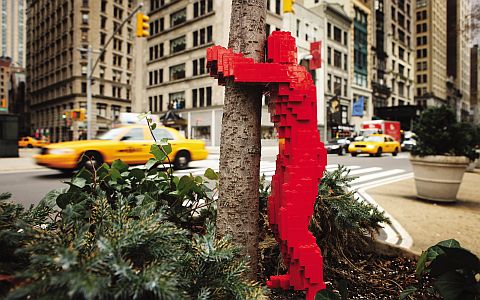 When I first heard about this book I was expecting it to be a collection of Nathan’s LEGO sculptures, with a bit of background information and facts. A nice art-book to keep on the coffee-table and flip through from time to time. While I would have been very happy with just that, I was pleasantly surprised that the book actually offers a lot more. It is a deep, personal and intimate sharing of the artist about his world and his work. Nathan talks about how each of the sculptures came about, their meaning to him and their effect on others. He also shares his own personal journey from just a regular guy who used LEGO to unwind at the end of a long day, to a world-famous LEGO artist. 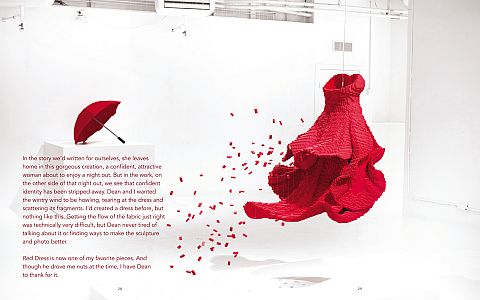 Personal sharing like this – especially from someone who achieved such fame – can often come across as stuffy and self-important. However this never happens with Nathan, not even when he talks about his greatest successes. There is lightness and humility waving through all of the stories; whether they be about great times, difficult times, intimate moments, or painful memories. It is the same combination of childlike playfulness, and sharing of deep insights that saturates all of Nathan’s sculptures. While some of his art-pieces can evoke deep and difficult emotions in the viewer, because they are built of LEGO bricks there is also an invitation to play and explore for new meaning and hope. Nathan shares in his book: “People are resilient and resourceful creatures; we always seem to find a way to pick up the pieces of life and put them back in a way that’s better than before.” 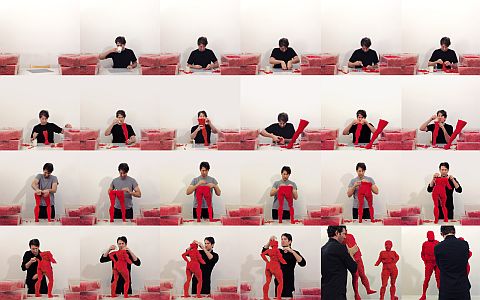 Nathan has the ability to draw you into this world of exploration and creative possibilities both with his sculptures and his words. In fact, I read the entire book in one sitting twice already, and I’m sure I will read it more. Both times it was like listening to a really good friend. And it is not just listening, it is more like a conversation; as you listen the stories and explore the sculptures, you also discover and (at least mentally) share things about yourself. With all the interactive gadgets and media we get these days, it is wonderful to rediscover that art created with simple LEGO bricks, and traditional books can in fact be just as engaging and dynamic.

Here is a quote from the to give you an idea of the style. I also like this story because my first official contact with LEGO was the same, so I can relate: “The first official contact I had with the LEGO Group was a cease and desist email. The company didn’t like what I was doing and wanted me to stop doing it. The email I received seemed like a form letter, with only a vague sense of what I was actually attempting: creating original art, using LEGO bricks and a medium. I think they were more worried about my se of the term ‘LEGO’ properly than my actual artwork. In any case, ceasing really wasn’t part of my plan. It was fortunate that I happened to be an attorney at the time, and I was able to recognize the message for what it was. Today, the LEGO Group and I have a much better relationship. But we’ve had some ups and downs. I build Skulls (pictured below) in a moment of frustration with the company. I wanted to do something that was ‘anti-childhood toy’, that was about a really un-LEGO theme: death. I looked for precedent and found LEGO pirate sets with little skulls on the flags and little skeletons for haunted-castle sets. I even built Skulls in bright, happy LEGO colors – blue, yellow, green, and red. Every brick I pressed was like, ‘Take that… and that… and that!'” 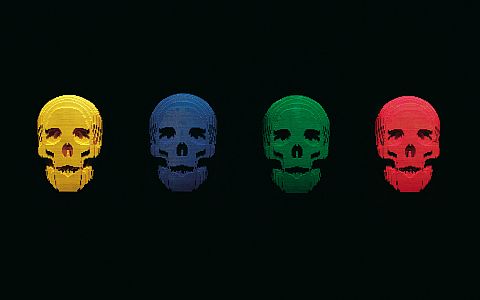 As you can probably guess by now, I highly recommend The Art of the Brick: A Life in LEGO by Nathan Sawaya. It is written in such a way that I think pretty much everyone could relate to; adults, teens, and even kids (the recommended age is 9 and up – that sounds just about right). This is an excellent gift for LEGO fans and also artists who work with other unusual mediums. It should be available at most local bookstores, and you can also get it on Amazon.com. The regular price is $29.99, which is totally worth it, and the current price on Amazon is $20.23. You can find it at the following link: THE ART OF THE BRICK ON AMAZON 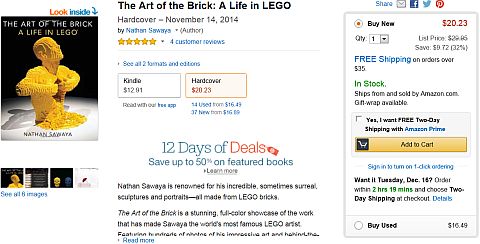 So what do you think? How do you like the LEGO art of Nathan Sawaya? Have you had a chance to see it in person? Do you have a favorite sculpture that he created? Have you ever considered becoming a LEGO artist? And if you have read the book already what are your thoughts? Feel free to share your thoughts and discuss in the comment section below! 😉

And you might also like to check out the LEGO books section for more news, reviews and discussions, or select from the following recent posts:

Next post: The LEGO parrot that eats and poops

Previous post: LEGO The Hobbit: Battle of the Five Armies