With the recent release of the #76042 LEGO Marvel Super Heroes SHIELD Helicarrier, the question keeps coming up: how small exactly are those microfigures? It is hard to judge their size just by seeing pictures on a computer screen. The fact is that these microfigures are very-very tiny. How tiny? I have taken some comparison pictures for you. See below. 🙂

First of all let’s start by saying that the LEGO microfigures are not entirely new, however they have appeared in so few sets so far that most LEGO fans would have likely never run across them. So far the microfigures were included as trophies in four LEGO Collectible Minifigures packets. They are each a solid metallic color of silver, copper or gold, with no printing. The minifigs with the trophies are as follows: Series 4 Soccer Player (silver), Series 3 Sumo Wrestler (copper), Series 2 Karate Master and Series 9 Hollywood Starlet (both gold). There is also a single printed microfigure in the #4195 LEGO Pirates of the Caribbean Queen Anne’s Revenge, serving as a Jack Sparrow voodoo-doll.

So yes, LEGO microfigures have been very rare, but then all of a sudden we get twelve of them in the LEGO SHIELD Helicarrier! And there are rumors that we may get even more in the future. I would also like to add here that while LEGO refers to these tiny figures as microfigures or micro-figs, the LEGO fan community calls them nanofigures or nano-figs. The reason is to differentiate them from the figures that come on the now retired LEGO Games sets. LEGO called these microfigures as well, however they are in fact much larger and differently shaped than the figures we are talking about here (see picture below). So if you hear people talking about nanofigures, they are likely referring to these tiniest characters, and if they mention microfigures you may need to clarify if they are talking about the retired LEGO Games figures or the nano-figs. Confusing enough? 🙄

In the picture below on the left you can see two LEGO Game figures (red and yellow). They are blocky looking little guys that served as game-pieces in the now retired LEGO Games sets. They are exactly two bricks tall with a standard stud on top of their heads. Their body parts are all one piece – in other words you can’t remove the head or the legs. Many of them come with really nice and detailed printing. There are over a hundred different game-figures with printings and they are popular items with collectors. There are also some unprinted versions that serve as statuettes and architectural decorations in some sets. 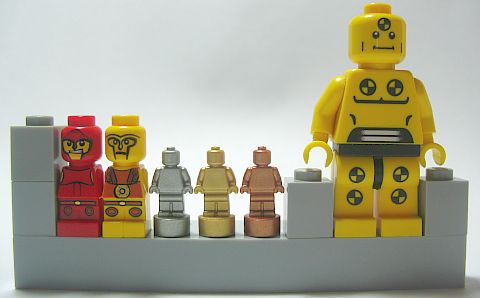 Next to them you will see three of the LEGO microfigures or nanofigures in silver, gold and copper. Notice that they are quite detailed miniature versions of regular LEGO minifigs. To compare, next to them is our mascot, the crash-test dummy, helping out to demonstrate scale. Regular LEGO minifigs are four bricks high, the LEGO Game figures are exactly half that size at two bricks high, and the nanofigures are barely over one brick high – even while standing on their built-in little platform. They just about reach the hip-line of the regular LEGO minifigure. They have no standard LEGO connection points other than the stud-hole at the bottom. 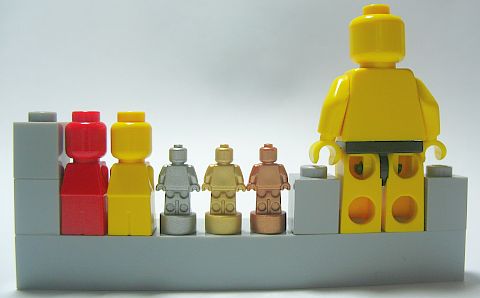 If you look at them from the back, you will see that the detailing of the nano-figs also mimics regular LEGO minifigs really well. Please note that the nanofigures are one single piece like the LEGO Game figures. You can’t move their arms and legs or take off their body parts. They are a single, solid mould. Now that you see how tiny these figures are, I think you will appreciate even more the detailed printing they come with in the #76042 LEGO Marvel Super Heroes SHIELD Helicarrier. 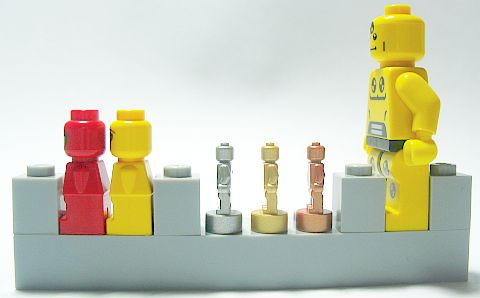 I believe that just like with the LEGO Game figures, a lot of people are going to get into collecting the nanofigures. They work excellent as trophies, tiny statues, and action figures for your LEGO minifigs to play with. They are also really cute. And people like collecting tiny and cute things. I hope that now you get a better sense on how tiny the LEGO microfigures are. If you have a chance to see them in person in either the LEGO SHIELD Helicarrier or in the LEGO Collectible Minifigures sets I’m pretty sure that even after reading this article you will be surprised by how tiny they are!

So what do you think? Do you have any of the LEGO Game figures or the LEGO micro (or nano) figures? Do you like them? Collect them? Lost them already because they are so small? Feel free to share and discuss in the comment section below! 😉