If you are a LEGO Ninjago fan and would like a chance to win all the 2015 LEGO Ninjago sets that were just released, you might want to participate in the “It takes a Ninja to Spot the Answer” competition at the official LEGO Ninjago website. 🙂 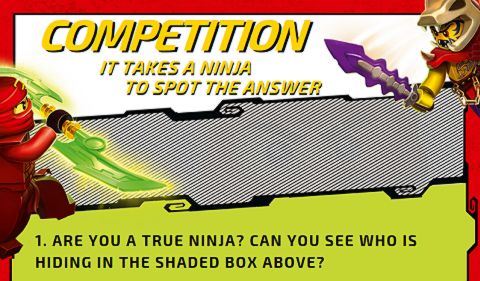 ➡ HOW TO ENTER: This LEGO Ninjago contest is quite simple, with only three questions that you should be able to answer easily. Once you select and type your answers  and hit “Submit”, you have entered the contest. You can find the contest here: ENTER LEGO NINJAGO CONTEST

➡ WHAT ARE THE RULES: Please note that you have to be signed in with your LEGO ID to enter the contest, and you can only enter once. So choose your answers carefully. There are no other restrictions, besides that all entries must be received by no later than the 22nd of April.

➡ HOW TO WIN: Only the first question has the possibility of getting the answer wrong, so pay attention to that one. The other two are open questions and you can answer them any way you like, however please note that your answer to the second question will be judged by how creative it is. The winners will be selected from among all participants who answered the 1st question correctly and given the most creative answer to the 2nd question.

➡ HOW TO RECEIVE YOUR PRIZE: All winners will be directly contacted by the local LEGO office some time after the cut-off date to enter. (My guess is probably sometime in May or June.) In the meantime you can also check out the currently available LEGO Ninjago sets at the Online LEGO Shop to see what kind of prizes we are talking about.

And that’s all there is to it to enter this fun LEGO Ninjago contest for a chance to win some awesome LEGO Ninjago sets! So what do you think? Are you planning to participate in this LEGO contest? Feel free to share and discuss in the comment section below! Also, don’t forget about the LEGO Architecture contest that is still running (see link below)! Best of luck to everyone to everyone who enters! 😉