Pinocchio premiered in theaters on February 23, 1940. It was the 2nd animated feature film released by Walt Disney Studios and is widely considered the studio’s most technical achievement. Not only this, but almost every Disney movie you see is preceded by the instrumental version of the song “When You Wish Upon a Star” that was originally featured in Pinocchio. In 1994 the film was picked by the United States National Film Preservation Foundation to be included in the National Film Registry as a culturally, historically, and aesthetically significant film. Only one film is picked to receive this honor each year. Michael Comeau and his wife are huge Disney and LEGO fans and to commemorate the 75th anniversary of Pinocchio they have created a LEGO version of the endearing puppet. 🙂 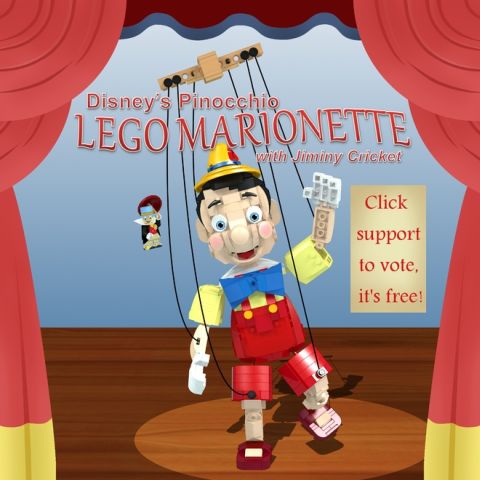 Michael shares the following about their LEGO Pinocchio: “My wife and I both have a love for puppets and marionettes and Pinocchio is one of our all-time favorite movies. For the LEGO Pinocchio project I designed the marionette using real LEGO bricks, and then did the rendering so Pinocchio had the correct coloring. My wife designed the Jiminy Cricket minifigure, tested the build of the final real life marionette, and did the graphic-design to present both characters. We are very excited about this project and decided to post it on LEGO Ideas for other Pinocchio fans, and for the possibility of making this into an official LEGO set.” 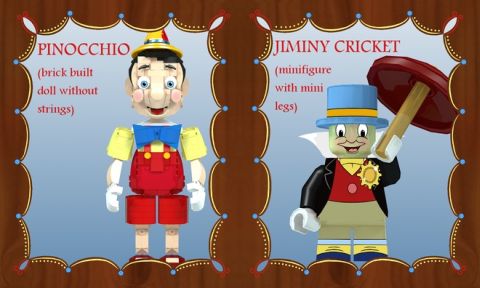 The LEGO Pinocchio marionette is 12 inches tall. His elbows, shoulders, knees and hips incorporates loose ball-joints that allow for free movement. Both his ankles are poseable with friction ball-joints and his fingers are individually poseable. He was built with playability in mind so that parts would not pop off while controlling Pinocchio. The marionette is controlled by manipulating the control-bar where the strings are attached (see video below). A display-stand is also included. The Jiminy Cricket minifig comes with an umbrella. 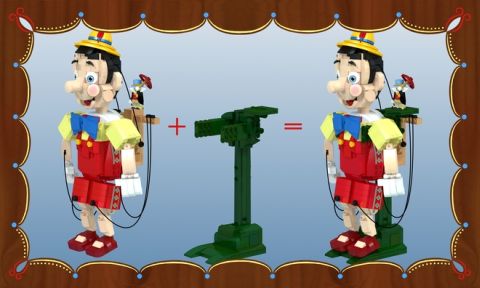 The total piece-count for the LEGO Pinocchio project is 837 pieces. 667 pieces for Pinocchio himself, which includes extra pieces for making the stringless display version, and possibly a few extra pieces to make Pinocchio’s nose longer. The stand is 140 pieces and the control-bar is 23 pieces. Jiminy Cricket includes 7 pieces with his accessories.

The LEGO Pinocchio project has been posted on LEGO Ideas just a few days ago, and it already started gathering support. However to achieve the minimum 10,000 votes for LEGO to consider this project for production, Pinocchio will need a lot more supporters before the one year deadline. If you would like LEGO to make Pinocchio into an official LEGO set, you can vote for it at the following link. It only takes a minute to register your support. Supporting a LEGO Ideas project doesn’t cost you anything nor does it oblige you to buy the set in the future. It simply shows LEGO that there are lots of people who like the project. Also, don’t forget to share LEGO Ideas projects that you like with your friends and family. Gathering 10,000 supporters is not an easy task: SUPPORT LEGO PINOCCHIO PROJECT 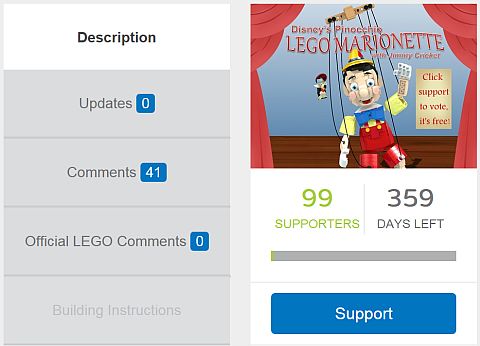 So what do you think? How do you like the LEGO Pinocchio marionette? Do you think this would make a nice LEGO set? Would you buy it? Do you think other people would buy it? Would you have any ideas or suggestions for the creators of this project to make it even better? Feel free to share your thoughts in the comment section below! And you can also check out the currently available LEGO Ideas sets designed and supported by LEGO fans at the Online LEGO Shop. 😉