The LEGO Legends of Chima Online game will be shut down on June 1st of this year. Here is the official announcement from the LEGO Legends Chima Online game website: “We are sorry to tell you that the game will no longer be accessible starting June 1, 2015 at 9:00am EST both online and through our iOS app. On this date, you will no longer be able to play the game or spend any remaining Gold Bricks. Please be aware that if you have any remaining Gold Bricks, you must use them before the game goes offline on June 1, 2015 at 9:00am EST. We hope you had a great time exploring the world of CHIMA Online. Thank you, The Game Team.”

I know many of our readers enjoyed the game and had great fun playing, so this is definitely sad news. You have about a month and a half left to play the game, so make sure you take advantage of the remaining time. And if you have never played the game up to now, I recommend you check it out before it gets shut down. LEGO Legends of Chima Online is a free multiplayer online game, that is fun for both young and old players.

Also, while I expect that the LEGO Legends of Chima sets will be around until at least the end of the year, we should be seeing dwindling stock levels at retailers. So if you have been eyeing some of the sets, I would suggest you get them before they are gone. Once the sets get retired, they will still be available on the secondary market, but expect much higher prices. I’m thinking that the minifigs will eventually rise to collectible status, especially the rare ones that only appeared in one or two sets. They are so unique, its worth adding them to your collection even if you are not a die-hard LEGO Chima fan. You can check out the currently available LEGO Legends of Chima sets at the Online LEGO Shop. 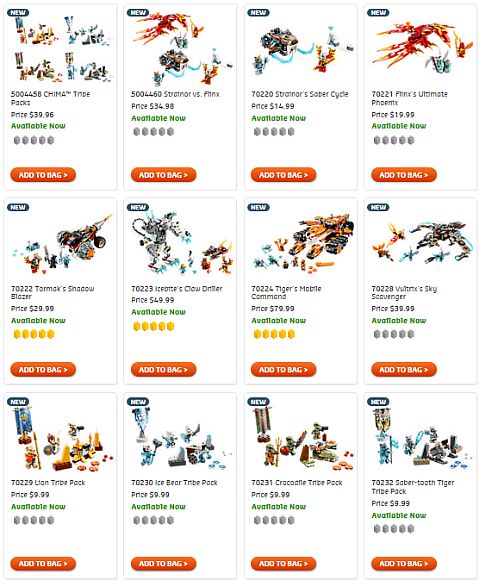 So what do you think? Have you been playing the LEGO Legends of Chima Online game? Do you like it? Are you saddened that it will be retired? And do you think LEGO Chima have the potential to come back like LEGO Ninjago did? Feel free to share your thoughts and discuss in the comment section below! 😉