There is a really interesting global campaign LEGO has been running in the last few weeks in collaboration with Facebook. The campaign consist of a series of videos that target parents, and encourages them to share the imaginative creations of their children through either photos or video-footage with the hastag #Kronkiwongi. 🙂

So what’s a Kronkiwongi? It’s just a made up name that could mean anything; an animal, a car, a spaceship… or even a combination of it all. The idea is to allow children to use their imagination to define the meaning themselves, and build their own Kronkiwongi from LEGO elements. Facebook’s Creative Shop worked for a year on the concept of the campaign, and created a series of documentary-style videos where real kids (instead of actors), who were asked what Kronkiwongi meant to them and to build one from LEGO bricks. Check out the sample video below, and you can see more on LEGO’s Facebook Page.

Besides being a cute campaign with adorable kids, this is also a very interesting idea from the marketing perspective that encourages interaction and user-generated content. This is not the first time LEGO has done this. Think about LEGO Ideas, where LEGO fans submit their own ideas for future LEGO sets, or the contest on ReBrick.com to create footage for The LEGO Movie, or involving LEGO fans in the design of the LEGO Minecraft sets. These type of projects give LEGO fans the experience of interacting with the brand in a more personal way than just being consumers. In today’s world where people are being constantly bombarded by advertisements and distractions, it is vital for companies to connect with their customers on a deeper and more meaningful level than just selling stuff to them. 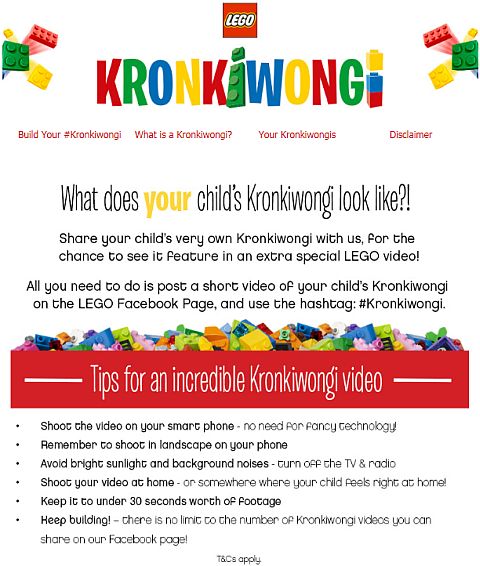 The goal of these type of campaigns is not sales – at least not directly – but interaction with fans and stimulating conversations about the brand and its products. Will Kronkiwongi go viral? Maybe, maybe not. Marketing this way is not easy, mainly because it is so new and so unpredictable. It is both an art and a science, and a good deal of sheer luck. But LEGO is definitely embracing this direction. Here is a really interesting article with more insights on the topic by Conny Kalcher, LEGO’s Vice President of Marketing and Consumer Experiences, titled: “We’re Turning Into a Media Company” – it’s worth the read, especially if you have any interest in marketing trends and new ideas for customer engagement.

And if you have kids, ask them what they think is a Kronkiwongi and encourage them to build one – their insights may surprise you! If you like, you can also share their creations on LEGO’s Facebook Page either as photo or video-footage. You can even make this a family event! So what’s a Kronkiwongi? Is it something awesome, or just a wonky marketing campaign? What do you think? Feel free to share your thoughts in the comment section below! 😉