In this Brick Breakdown series I review official LEGO sets, from the perspective of looking at interesting building techniques we can all learn from. Today we will be looking at the #76031 LEGO Super Heroes Hulk Buster Smash set. You can also check out the previously discussed LEGO techniques found in official LEGO sets at the end of this article. 🙂 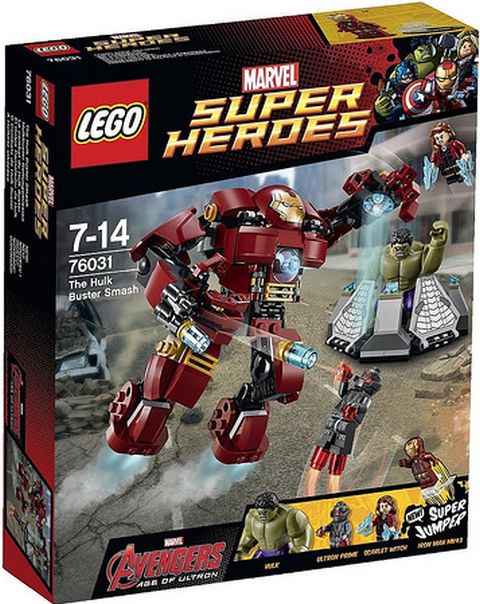 If you are a fan of Marvel Comics, chances are you know of the Hulk Buster Iron Man suit. Like Batman in the DC Comics universe, Iron Man is just as paranoid of his allies as he is of the villains he fights, so he created the Hulk Buster to protect him from both sides. The Hulk Buster is also prominently featured in the recently released Avengers: Age of Ultron film – which is what this LEGO set is based on. The armor is big, bulky, and looks awesome both in the film and in the LEGO set. In fact, the #76031 LEGO Super Heroes Hulk Buster Smash is worth it just for the Hulk Buster itself. If you are planning to get any of the 2015 LEGO Marvel Super Heroes sets, I would recommend this one. Cool factor aside, the question remains; what types of techniques are worth looking at in this set? There are two that I would like to bring your attention to.

One of the main play-features in the #76031 LEGO Super Heroes Hulk Buster Smash is that the Hulk is being kept under control by Scarlet Witch and Iron Man is trying to rescue him. Scarlet Witch flying over the Hulk is achieved by attaching her to a clear rod. In the meantime the Iron Man minifig can be attached to a super-jumper, and if you launch him correctly, he should be able to knock off Scarlet Witch. (You can see how all of this works in the video-review below.)

You mostly see LEGO sets in action poses when they are meant for display. For example in the LEGO Star Wars Ultimate Collector Series sets. In the case of a LEGO Star Wars spaceship, it would be posed in an angle that captures a very intense moment from the film. However in the #76031 LEGO Super Heroes Hulk Buster Smash, the posing of Scarlet Witch is taken further by combining it with a play-feature. The rod she is attached to is not just there to make her look like she is flying, but it also facilitates the play-feature of knocking her off. This is achieved by a hinge that is attached to the base of the rod that easily makes her fall over. This is a rare, but very interesting concept, since posing a set for display and play-features are usually considered very different styles of building.

If we study the design, we can understand why all of this works. An action pose that does not move is all about being static – freezing that pose in time. A play-feature is typically all about putting something in motion, which commonly means you have to give up stability. As you can see, they represent opposite concepts. However in this set the small size of Scarlet Witch does help. The less you have to support, the less you need to worry about losing stability. And even if Scarlet Witch falls over, it fits exactly with the action feature. So at least in this set, the lack of stability for the action pose is an asset instead of a problem to overcome. The end result is a design that manages to capture two things at once; there is the floating in midair effect, and the crash and burn from the action. The problem with this technique is that it has a very narrow application. Imagine combining an action pose with play-features in a large LEGO Star Wars set!

➡ FIXED VS. BUILT MOUNTINGS WITH LEGO

Before discussing these options, it would help to explain what I’m referring to. A fixed mounting is typically a single piece that provides a point of connection that is special. An example of this is the ball-joints in the shoulders of the Hulk Buster. It is a 2×2 brick with a ball. A built mounting is anything that provides a special point of connection that is made up of multiple parts. In this set the Hulk Buster’s hips are an example of a built mounting. Because the Hulk Buster includes both techniques, and both use ball-connectors to achieve the same purpose, it is an excellent model to study. 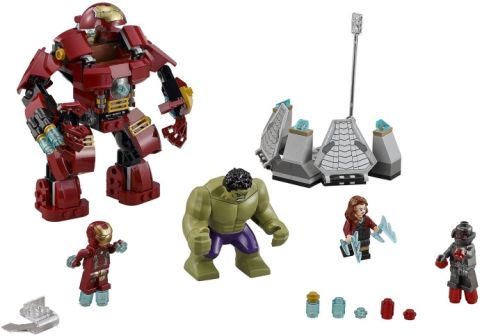 Fixed mountings often have clear range of movement that is easy to figure out, even if you are looking at someone else’s LEGO creation. They are also simpler to build into a LEGO model. Basically using fixed mountings is the most user-friendly method to work with. Built mountings – on the other hand – take a bit more creativity. Which mostly means that you will need to consider structural integrity while creating a mount. And the upside is that you have nearly an unlimited amount of flexibility in how you might want to alter the mounting. Note that in the Hulk Buster each ball-joint is on an axle. This does restrict the legs from doing the splits, and it also gives you the freedom to line the legs up on a horizontal level. In this case, the legs are just a little farther away from the body which makes the legs fit better and gives the suit a little more stability.

Up to the point of building the #76031 LEGO Super Heroes Hulk Buster Smash, I never considered using an action pose technique for a play-feature. However this set has shown me that there can be times when this is possible. You might consider using this technique for some clever effects. When it comes to mountings, my advice is simple; fixed mountings are best if they do exactly what you want. When that is no longer the case, consider building your own. Keep in mind that having a visually appealing look is just as important as functionality when deciding whether or not to build your own mount.

So what do you think? How do you like the #76031 LEGO Super Heroes Hulk Buster Smash set? Do you have it already? And did you learn from the interesting building techniques used in the sets? Feel free to share your own experiences and tips, or ask questions in the comment section below! 😉

Previous post: When music & LEGO combine into a symphony