by Thita (admin) on February 19, 2016
in Featured LEGO Creations

When the #71016 LEGO The Simpsons Kwik-E-Mart was first announced, it wasn’t just Simpsons fans who got excited. This is the first time LEGO fans got a proper convenience store in any LEGO theme. The realistically detailed exterior and fully stocked interior makes this a perfect corner store that would fit in most LEGO city settings. 🙂 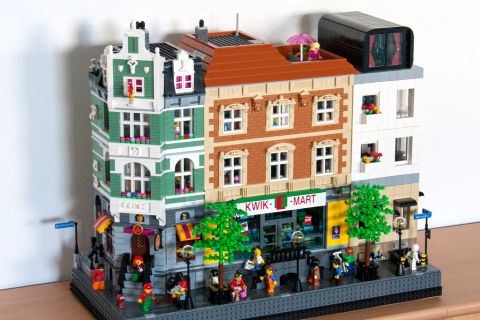 And of course the #71016 LEGO The Simpsons Kwik-E-Mart is also an excellent match to the LEGO Modular Building series, because it is a proper four-sided building, scaled just right for minifigures. The structure would have to go to a corner though – or the end of the street – as it has a different shape than the other LEGO Modular Buildings. However if you would like to modify the #71016 LEGO The Simpsons Kwik-E-Mart to match the style and size of the other Modulars, there is one LEGO fan who will give you an excellent example of how to do that.

Flick member cimddwc built a row of three houses for his LEGO city to match the other LEGO Modular Buildings. Two of them are older style, using masonry-bicks in sand-green and dark-orange, and the third building is more modern. The middle building got the Kwik-E-Mart incorporated into its first floor, pretty much exactly as it came in the original set. The rooftop is also from the original Kwik-E-Mart. In between are sandwiched two additional stories; one of which is an extended version of the #21302 LEGO Ideas The Big Bang Theory set with an added kitchen, and the other floor includes three bedrooms and a bathroom loosely inspired by other settings in The Big Bang Theory TV show. 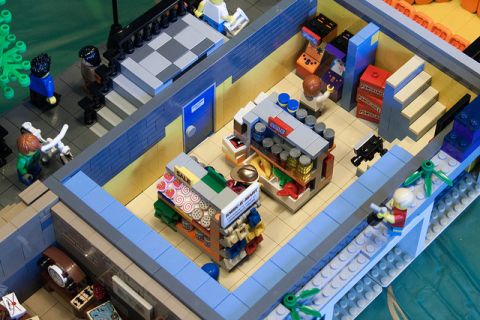 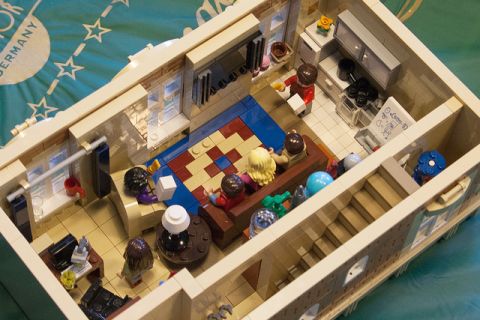 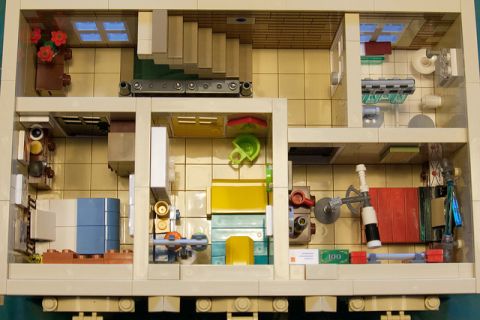 The whole arrangement comes together perfectly. This is an excellent example of repurposing not just one, but two official LEGO sets to create something different. Getting one or more great LEGO sets and merging them together takes off a lot of pressure from the builder to design every single detail,as LEGO’s own designers have already done it for them. Official LEGO sets also provide substantial amount of LEGO elements to start with – which is usually the most economic way of working on larger projects. 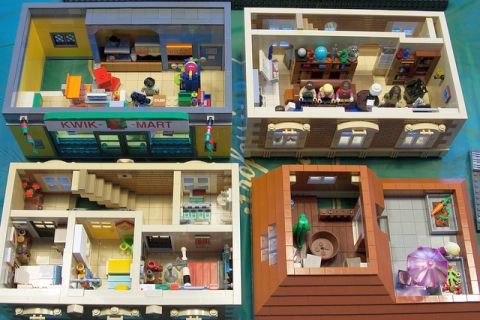 Of course there are still things for the builder to do. For example in the case of this building, while the original LEGO The Simpsons Kwik-E-Mart had both an interior and an exterior, the LEGO Ideas The Big Bang Theory focuses only on the living room itself, so the exterior walls on the second and third floors had to be custom designed. The masonry-bricks help with this greatly as they provide quite a bit of texture and realism. The colors were inspired by walls of The Big Bang Theory set. So all was left to do was designing the window-frames and extra decorations to match the style of other LEGO Modular Buildings – which was done very tastefully here. 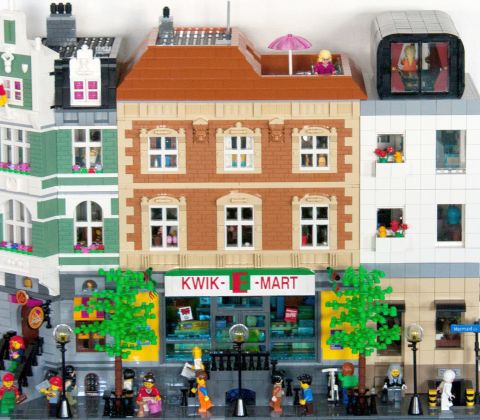 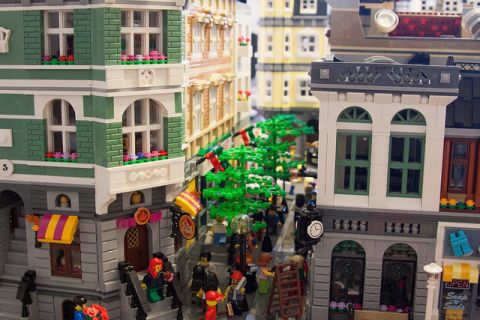 While the focus of this article is to show you how the LEGO The Simpsons Kwik-E-Mart could be incorporated into a LEGO Modular Building setting, I wanted to briefly mention the other two structures. The sand-green corner building also uses an official LEGO set for its first floor: the #41074 LEGO Elves Azari and the Magical Bakery set. And there is also a super-secret worship room for the cult members of FOOLOO a.k.a. Followers of the One Long Orange Object – reminds me of The LEGO Movie scene! The other two floors include a ballet school using the new ballerina from LEGO Minifigures Series 15. 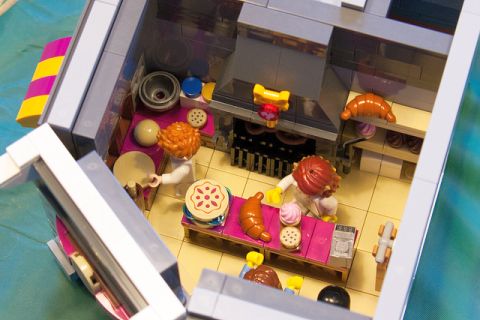 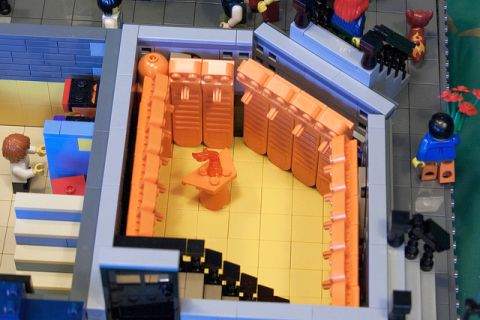 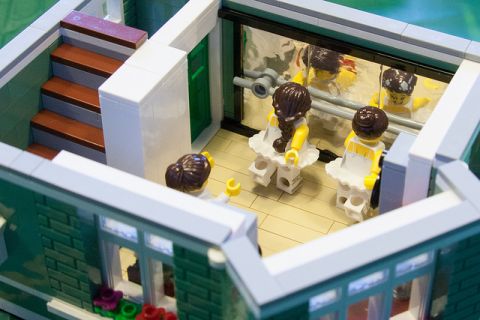 The modern house on the right got an antiques store in the basement and first floor, and an apartment on the second and third floors, with the bedroom all the way at the top for a great view. While the style of this building is different, it perfectly blends in with the rest of the street – very much like modern buildings are often seen next to older structures in real life. If you would like to see more pictures, check out cimddwc’s flickr album. 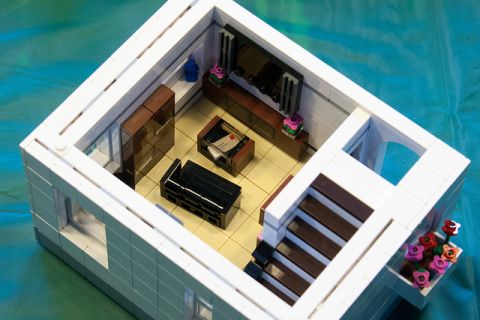 So what do you think? How do you like this modified version of the LEGO The Simpsons Kwik-E-Mart? And what do you think of the other buildings? Feel free to share your thoughts in the comment section below! 😉