In this Brick Breakdown series I review official LEGO sets, from the perspective of looking at interesting building techniques we can all learn from. Today we will be looking at the #10251 LEGO Creator Brick Bank. You can also check out the previously discussed LEGO techniques found in official LEGO sets at the end of this article. 🙂 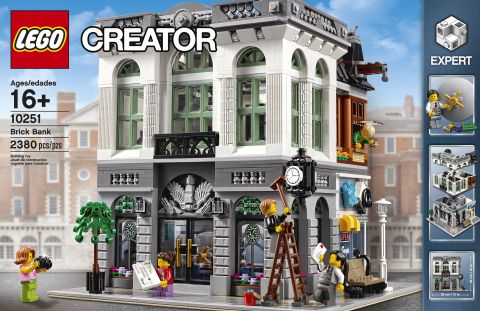 Putting together a LEGO Modular Building is always a highlight of the year for me. I got into the series late, so haven’t had a chance to build them all, but I do have the first three and the last three, leaving out five in the middle. Eventually I hope to catch up with them all, as money and space permits. Recently LEGO sent us a copy of the #10251 LEGO Creator Brick Bank for this review series to examine the building-techniques in the set, and I was of course happy to take a look.

Before getting into the techniques I would like to mention that the #10251 LEGO Creator Brick Bank doesn’t disappoint. I was not even bothered by the low wall on the first floor separating the bank from the laundromat as mentioned in our previous review: LEGO Creator Brick Bank Full Review. What I did find a bit odd was the pulley with rope over the laundromat. It is not so much that the presence of the hoist bothered me, and it is certainly a fun action feature, but to me it felt under-designed and too plain. Especially with all the elegance of the rest of the building.

Still, the LEGO Creator Brick Bank quickly became one of my favorites from the LEGO Modular Building series. From its clear architectural roots to interesting features inside the building, this set is a marvel. It also manages to incorporate a story within the set – just like the #10246 LEGO Creator Detective’s Office – without getting contrived. Plus the parts-selection and colors are fabulous. It’s definitely worth saving up for as a bigger LEGO purchase. So the question then remains, what does the set has to offer as far as interesting building techniques? Let’s find out…

In architectural type LEGO sets – like the LEGO Creator Brick Bank – I always try to identify what style the building is designed in, comparing them to real life examples. Of course sometimes there is no identifiable style in a LEGO set, but other times it is quite obvious. After some research, I came to the conclusion that the style used here is closest to Baroque Revival, also known as Second Empire.

Doing research like this is quite interesting. First I came across the original Baroque period. This was a highly ornamental style that twisted pillars, used heavy curves on the sides of buildings, and was prominently in religious edifices. There was also mention of frequent use of ovals and dramatic lighting. In essence, if this style was a movie, Baroque architecture goes heavy on the special effects. 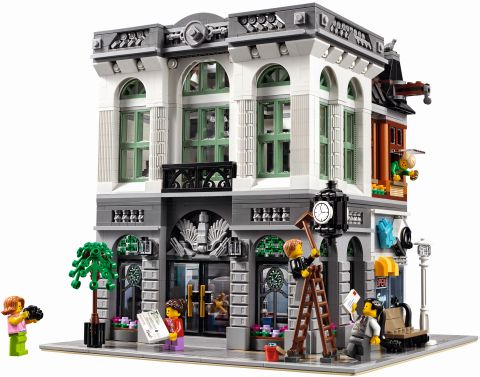 Baroque Revival was said to evoke grandeur. It was found in religious, governmental, and even commercial buildings. Many times an entire city block was done in the style. And just like in the LEGO Creator Brick Bank with the added laundromat, incorporating another business into a building was normal. In addition, unlike the Baroque period, Baroque Revival was not opposed to using other elements from previous styles. So finding classic Greek columns, ribbed ceilings, and symmetrical sides were also common. Given all these factors, the LEGO Creator Brick Bank appears to be a great example of how to create a Baroque Revival building.

➡ CREATING A LATCH WITH LEGO

I must admit, I have a soft spot for the vault door inside the LEGO Creator Brick Bank. It got the classic shape I expected to see, however what really blew me away was that the door actually latches close. This led me to examine the latch more closely. 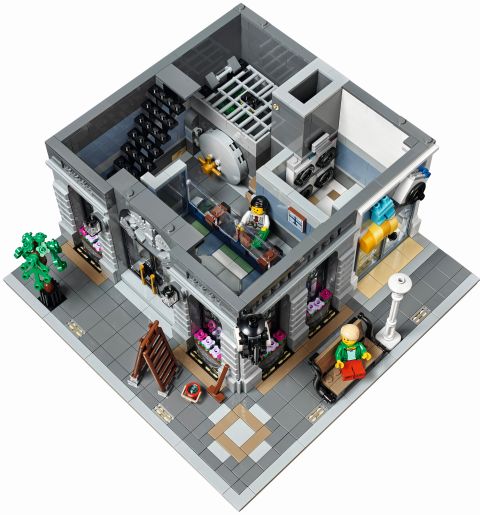 Essentially a latch is comprised of two major elements. The first is the working piece – which is usually the hinge that the door or lid uses to open and close. The second is the friction element – this is what provides resistance from having the working piece from being used. And there are two major categories a latch can have; either hard closure that prevents the working piece from any movement, or soft closure, which provides just enough resistance to keep something closed but not locked. Soft closures are like the treasure chest LEGO makes, or the use of magnets on a cabinet-door you might have in your house. What is used in the LEGO Creator Brick Bank vault door is a hard closure that prevents the door from opening. 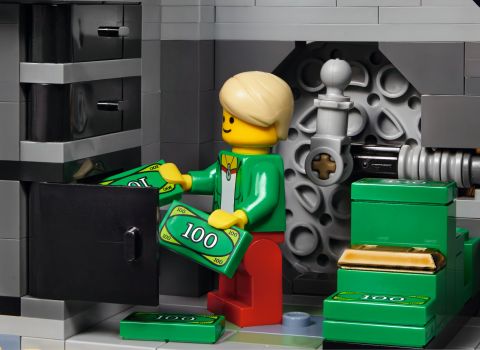 Building a soft closure latch is typically the tougher issue since you are applying only enough friction to get the job done. Making a hard latch is much easier. Consider many of the LEGO Castle sets with bars to lock the doors – that’s a hard latch. What makes the LEGO Creator Brick Bank particularly unique is how clever the latch is hidden. By making the entire door rotate, it distracts from the fact that all that is happening is that you are raising and lowering a small arm on the inside of the door. So the real goal when you are making a latch is to figure out what will stop the working piece from being used. This will involve figuring out how to remove the friction element with a hard closure, or adjusting the friction with a soft closure. All the rest is simply disguising your design.

As the LEGO Modular Brick Bank is quite crammed on the inside, it incorporates a short wall between the bank and the laundromat for play-access. Another way access to smaller sections can be made easier is with modular segmenting. Consider the wall of the laundromat that has all the washing-machines – this is the same wall that has the security boxes and coin counting machine on the other side, with the chimney-shaft in between. This entire section of the building is made up of stacked segments. In this set the feature is mainly used for playability, and also to help grab pieces that might have fallen and are too hard to grasp.

In other sets, this same concept is used to reorganize furniture or change the composition of a room without having to take apart a whole section. A great example of this is in the #41101 LEGO Friends Grand Hotel where the furniture and other accessories can easily be reorganized. Ultimately how you employ this technique is up to you, but it is worth studying how it is done in the LEGO Creator Brick Bank, because it achieves several goals at once; playability, accessibility, and structural integrity.

The last technique I want to talk about involves the chandelier in the LEGO Creator Brick Bank. Essentially a chandelier is a large decorative piece that brings a touch of elegance and grandeur to an interior space. Normally, a feature like this would feel out of place in most LEGO models with a simpler in design. However, in the LEGO Creator Brick Bank it is done excellently. For this reason, I want to spend a few moments pointing out why this is.

First, proportion is crucial. Typically a chandelier is a large object that looks good in a large space. Placed in a small room it would look gaudy and crowded. In this set, the chandelier roughly covers a third of the vertical space. This gives it the right look to capture the eye without filling the space. 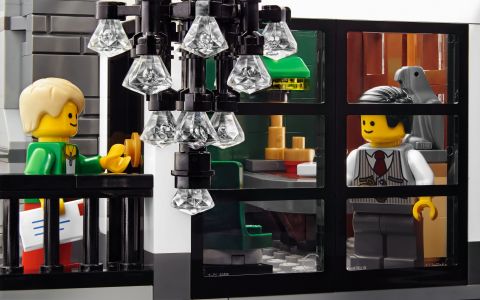 Second, the chandelier must match the architectural style. Chandeliers are extremely ornate and can easily clash with the rest of the interior design. I know many people have chandeliers in their home, but unless the room is big enough, and the ceiling is high, they can send a strange impression.

Finally, a chandelier needs to be well lit. Chandeliers are one of those decorations that needs to be bathed in light to show off their full beauty. At night chandeliers are of course lit, but during the day having lots of windows to admire the chandelier from all angles could really help. This is what you see in the LEGO Creator Brick Bank as well.

Over the years I’ve seen a number of LEGO chandeliers in all sorts of shapes and sizes. Sometimes the chandelier is shrunk down to the point where it loses its majesty. Other times it is too large for the room it is placed in, or it is buried in a design where you can’t appreciate it properly. Ultimately one should consider the use of space when attempting a large decorative piece like a chandelier – whether that be in real life, or in a LEGO model.

No matter which real world architectural style you attempt to emulate in LEGO, keep in mind that there is a history behind that style. Spending time to research this can lend a realistic aspect to your model that will really impress those who view it. Baroque Revival may not ever be necessary for you to copy, but if you need an example the LEGO Creator Brick Bank is perfect.

The art of latch design does not come from the mechanisms itself. Rather, the real trick is figuring out how to blend it into your LEGO creation seamlessly. Start with the basics of what you need the latch to do, then redesign, possibly multiple times, for a polished look.

Let’s face it, space is limited in LEGO buildings. There is only so much you can cram in a design and still make it believable and accessible. This is where segmented modularity can be a big help. Constructing advanced detail work and accessories that can be pulled out easily not only helps with adjustments, but can also solve space issues, and even add play-features.

Finally, a big decoration in a room – no matter what it is – takes careful consideration. Chandeliers, as an example, need more light and space than most things, but even elements like statuary, fountains, and large desks will require different special treatment. I recommend that when you find a design that is done well, save that image in your mind for future consideration. Chances are what you like about it is the fact that the designer took the time to properly implement some small detail that can easily be overlooked.

So what do you think? How do you like the LEGO Creator Brick Bank compared to the other LEGO Modular Buildings? And what do you think of the building techniques used here? Did you learn something new that you can incorporate in your own creations? Feel free to share your own experiences and tips, or ask questions in the comment section below! 😉